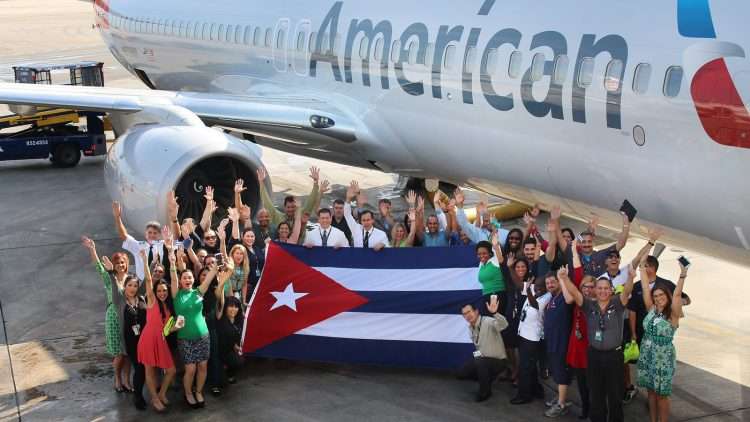 Regulatory authorities in the United States approved this Wednesday a request from American Airlines to resume flights to five destinations in Cuba, interrupted in 2019 when the administration of Republican Donald Trump considerably restricted air service between the two countries.

The decision of the Department of Transportation will allow the U.S. airline to fly again from the city of Miami, Florida, to the Santa Clara, Varadero, Holguín, Camagüey and Santiago de Cuba airports, according to a report by the AP news agency.

Before receiving authorization for its operations, American Airlines had announced the purpose of carrying out two daily flights to Santa Clara starting next November, and one with the same frequency to the rest of the now validated destinations, the report added.

The company currently operates six daily flights between Miami and Havana, a destination to which the U.S. JetBlue and Southwest Airlines also fly from the Fort Lauderdale airport, also in the southern state.

The Trump administration’s decision sought to deprive the Cuban regime of income, leaving only the island’s capital as the only possible destination for U.S. airlines, indicates AP. After a review of the United States policy towards Cuba, the administration of Democrat President Joe Biden reversed that decision, and announced that it would relax the restrictions for those who wish to travel from the United States to the island.

At the request of Secretary of State Antony Blinken, the United States Department of Transportation issued a document in early June reversing the policies of the previous administration regarding civil aviation flights to Cuba, contained in five administrative provisions approved between 2019 and 2020.

“Consistent with the [Biden] administration’s actions announced on May 16 in support of the Cuban people, I respectfully request the Department of Transportation to end civil aviation restrictions on flights between the United States and Cuba, implemented in previous Department of State requests in letters dated October 25, 2019, January 7, 2020, and August 13, 2020,” Blinken wrote then.

The new provision restored flights to the nine airports previously authorized by the Obama administration and deactivated by the Trump administration: Camagüey, Cayo Coco, Cayo Largo, Cienfuegos, Holguín, Manzanillo, Matanzas, Santa Clara and Santiago. In addition, it benefited thousands of Cuban Americans, mainly residents of South Florida, who until now had to visit the island using chartered flights, which implied higher costs.