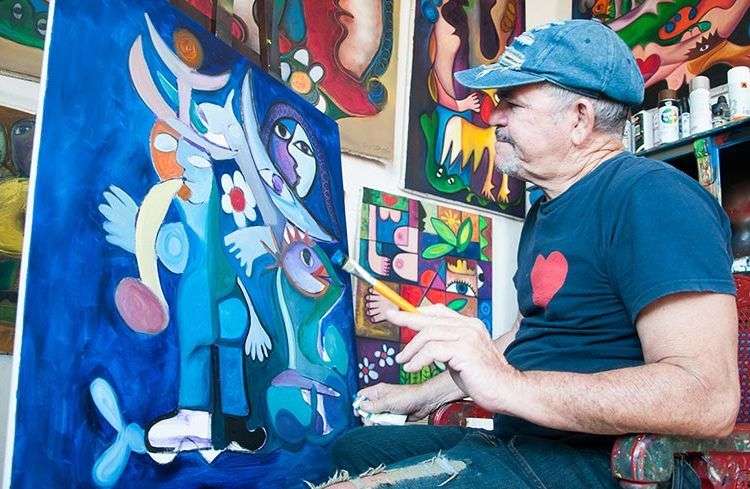 (The costs of the works Fuster develops in his neighborhood are financed with the selling of his paintings / Images: Raquel Pérez.)

“The Project started in 1994, in the midst of the Special Period (economic crisis), and it is a symbol of my optimism. People used to tell me it was too expensive but I wanted to prove that I could afford it with my paintings without using resources from the State”, states plastic artist Jose Fuster.

Now, 20 years after, his paintings and ceramics embellish the whole neighborhood, from the Family Doctor’s office and the bus stop to the walls of his neighbors and even some of their roofs, resuscitated with new shapes and colors after being hit by a hurricane.

“I started with my own place because I didn’t have to ask for permission to no one”, he recalls. “Then, my neighbor Iris liked it, she is a nurse that served some time in Angola and I built her house and wrote Doña Irisat the entrance, something she had always dreamt about”.

Thus, neighbors gradually joined the project and Fuster’s work spread through Jaimanitas, in the outskirts of Havana. His work ranges from a colorful roof with a huge cock at the top or a peace pigeon or a giant Guernica.

Some people call him the tropical Gaudi. In addition to certain resemblance in the shapes and colors of his work, he obviously admiresthe Catalan architect, who is immortalized on a corner in a ceramic wall dedicated to his memory.

The work started without too many obstacles until he was asked to embellish the Family Doctor’s office. “I wanted to brighten up the environment and I painted a cock but they ordered to repaint it so we did it again but this time with ceramic and in front of a camera. So far no one has dared to touch it”.

“Several times I have been visited by city authorities claiming that I had violated the rules, a wall should not exceed a certain height but I do what I please. When they ask me for the permits I say: Did Fidel asked Batista for permission to attack the Moncada Garrison?” But no one bothers him anymore.

Costs are high; some of the ceramic can be purchased in Cuba at the market price and some other is imported from abroad. “All of this is financed with the selling of my paintings. Fortunately, I am a ‘high-yielding’ plastic artist; I work every day and a have a lot of clients who like my work”.

“I come from a very humble family and I had to survive, be outcast, clean shoes, work in a bowling alley,take care of a goat. At 14 I climbed the Sierra MaestraMountains

to teach farmers to read and write and there I found out I had a gift. Today I still paint farmers from the 50’s”.

“I am not a member of the Party and I am against all dogmas”, he says and adds: “actually I have not done great things with this project, I only feed my own spirit and I grow along with the people around me trying to make us all better persons”.

“Instead of making a fortune, I try to spend my money in my neighbors, live in this environment, watch children be happy, throw parties for them, it is like having a big family. I feel pleased of sharing what I have with the poorest in this earth”.

Silvio Rodríguez: “I wouldn´t know how to live any other way”