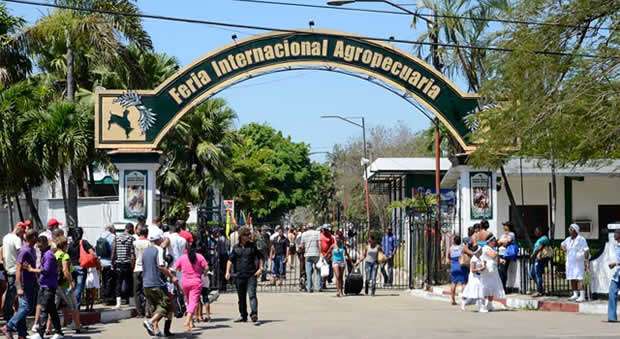 Reinaldo Funes Monzote spent all Saturday March 30 at Boyeros, retracing the Agroindustrial International Food Fair, which everyone has baptized, shortened as Agricultural Fair. It’s his job. He doesn’t raise cows or saddles horses, or drives herds. He moves around shooting photos and talking, but he is not a journalist.

There you could find him, trying to grasp, above all, a style, a becoming, and a culture. Because he is a historian: a chronicler interested in issues related to Cuban agriculture and enviroment.  So he went to the Fair this year again and found it full of people of Havana, and from across the country, buying, selling, having fun. It’s typical.

Funes, a researcher with the Antonio Nuñez Jiménez Foundation for Nature and Man, knows by heart how such events that the media cover like a weekend ride, helped, at all times, to develop cattle raising in Cuba. This activity, like sugar and tobacco, shaped our identity, and was present at all the crossroads of Cuban history.

Throughout the history of cattle rising in Cuba, throughout the nineteenth century, and during the twentieth livestock shows played an important role in stimulating the economy. Do they have the same impact today?

That is one of the key objectives; you cannot see these shows as separate from the desire to improve cattle rising in all its branches and other agricultural activities. I do not think that is very different today than when these events started in the world and in Cuba in particular.

In our case the first of the cattle fairs in the modern sense was in the town of Puerto Principe, today’s Camagüey, in 1843. This first experiment was stopped after the first few years, but it revived more strongly in the mid-1850s and has since become highly relevant events in the same year until the outbreak of the Ten Years’ War.

Other towns on the island followed suit and established their own livestock shows, as Remedios, Bayamo and Colon. After the war and until the first half of the twentieth century fairs were held in Bayamo and Colon, alongside emerging new venues to expose and reward livestock as Guaimaro or Sancti Spiritus and especially the Rancho Boyeros one, opened in the 1930s.

This type of event had great impact nationally and internationally for the Cuban livestock, which in the 1950s was considered as second in importance after the sugar industry.

Since 1959 these events have gone through different stages. New parks were opened till there were more than 30, as in Holguin, Las Tunas, San Jose de las Lajas and even in some livestock enterprises. Over the years livestock fairs also diversified in different areas, such as Zebu, small livestock and horses, of the Creole horse and Santa Gertrudis fairs.

An element always present at fairs since the early days were the sports activities, with an evolution which blossoms in the twentieth century with the development of Cuban rodeo, greatly influenced by American rodeo. After the Revolution of 1959 the sport was given a boost, as the rodeo plaza in the Lenin Park and the existence of more than 130 rodeo arenas in the country.

Cuba is an island surrounded by sea and with a few heads of cattle, but “a good beef steak is still at the top of the food aspirations”, which for you is one of the traits of a cattle culture that has evolved over 200 years in the country …. How did and how it reproduces the centrality of the cow in the Cuban imagination?

On this question there are two issues I want to clarify, one is that Cuba designates the name of our country, but this is actually an archipelago which bears the name of its largest island. In that sense the herd has been much more widespread throughout the archipelago than any other crop or economic activities. For example, their presence has been notable in the Isle of Pines or keys as Romano and Coco.

Moreover, you can have the idea that the current number of heads of cattle in our country is small, but I think that despite the crisis we suffered during the special period, is still relatively high. At the triumph of the revolution in 1959 we had an estimated 5 million heads of cattle, a little less than a cow per person. The present is estimated at about 4 million heads of cattle and a population over 11 million people, or more than two people per animal. However, the issue would not be only quantity but quality.

The decrease was more marked in horses as automotive transportation advanced, but also in the second half of the twentieth century the number of pigs increased dramatically.

As for the cattle and beef as the pinnacle of livestock culture and food aspirations, I think I would go back even to the time before the rise of the sugar plantations in the nineteenth century, and the previous beef supply system to populations, when that meat was considered the “bread” of the poor.

It also has to do with the predominance of beef cattle in the first half of the twentieth century, which was consolidated as it was losing importance as animal traction. But I must say that eating beef was very uneven, especially in Havana, which was the great core consumer, and the rest of the island.

After the 1959 revolution consumption of beef was spread to large segments of the population, through rationing, but also began to favor a policy of milk and milk products, which together with other measures led to the overall decrease of the annual volume of beef.

This is a complex issue that cannot be answered simplistically, without the large impact of the arrival of so-called Special Period on a highly specialized cattle breeding and the precipitous decline of its production indicators. The truth is that despite all the vicissitudes of livestock, beef remains on the cusp of what many of the Cubans considered the top step of a good meal. Could it be because access is more limited today than ever before? This should be without doubt one of the main reasons, but in my opinion the roots are much deeper and remote in time.

How likely is that livestock can effectively “rule again” in the Cuban countryside, after “200 years of sugar hegemony “?

This is a statement I made in a first general work on the subject of the history of cattle rising in Cuba in the long term, an audacity that has more to do with the desire to provide an overview of the topic with an objective to from the present reality of this activity. So I think it could have used another adjective, rather than a rule it would be a clear geographical dominance.

Taking the census statistics from the colonial period livestock especially cattle was often the most widespread form of land use, although its economic performance fell far short of the massive profits than sugar left or other profitable crops such as tobacco.

What seems indisputable is that before the closure of many sugar mills since 2002 and the need to allocate the sugarcane areas for other purposes, livestock is presented as one of the most promising alternatives to the occupation of abandoned spaces.

In the current distribution policy of idle land, many of the applications have to do with the expansion of livestock farms or the opening of new areas for animal husbandry.

Of course the ideal scenario would be to complement in a mutually beneficial way agriculture and livestock, something that prominent scientists already insisted on since the nineteenth century.

In any future scenario, that should be the basis for a revival of Cuban agricultural activity, in addition to be profitable in the economic sense, could be environmentally sustainable.

This does not imply that livestock will be able to meet a beef-rich diet, although it should provide at least the national consumption of milk and as much as possible of other dairy products, with the widest possible access to the entire population.

This would take efforts to contain or reverse soil erosion, contribute to fertilization through manure and exploit the potential of better pastures and other crops to feed the animals, provide local transportation alternatives for many populations of medium and small size, and promote continuity of cattle culture that has more than five centuries of evolution in our country.

Beyonce. Right. What else?

How to avoid failure in private business