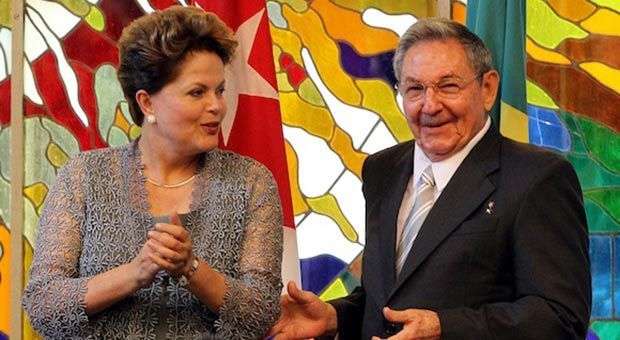 Brazil’s president, Dilma Rousseff, invited to the 2nd Summit of CELAC, will accompany Raul Castro on Monday in the opening of the new container terminal. Rousseff and Castro will not be simply opening the doors of a new marine facility, but they will also premiere a chapter in Cuban economic history, at just few months after the entry into force of a law on foreign investment that will be discussed and approved in extraordinary circumstances.

El Mariel is a bet towards a somewhat uncertain future because all the investment is thought for the time in which USA and Cuba to fully resume their economic relations.

The expansion and modernization of the port has cost Brazil over 640 million dollars. The work has been developed by the Revolutionary Armed Forces Construction Company and Odebrecth Corporation. The progress of its construction had a high-level monitoring, in which Raúl Castro was directly and publicly involved.

The Special Development Zone, accompanying port, aims to be the basis for a new wave of foreign investment in Cuba. It will also function as a giant storage center and regional marine cargo handling. To attract entrepreneurs, the Cuban State Council approved a special tax regime, which reduces or eliminates some taxes.

Through Mariel, Cuban government hopes increasing exports, the implementation of high-tech projects and generation new sources of employment within an economy which growth has gradually slowed in recent years.

The entry of new foreign investors would be led by Brazilian companies such as Marco Polo, the largest assembler of bus bodies in the world, or the glass producer Fanavid, which would use Mariel as a base to supply its products to the Caribbean region.

The Brazilian bet involves investments beyond Mariel. Rousseff’s government offered in 2013 more than $ 170 millions for Odebrecht also to modernize airports of Havana and other Cuban cities.

All this deployment is due to a geographical logic. The Caribbean is the American Mediterranean and all trade between South America and the United States passes through its waters, in addition to the millions of containers from Asia passing through the Panama Canal which are discharged in the ports of the U.S. East Coast.

Mariel will complement the expansion of the Panamanian interoceanic route, therefore it may receive in its piers the giant post Panamax size vessels , which may not anchor in the harbor of Havana or in other Caribbean maritime enclaves.

Oil appearance in the waters located just off the port could be an incentive. U.S. Interior Department estimates that more than 4 billion barrels of crude lie in Cuban portion of the Gulf of Mexico.

The Mariel port is just one of the many businesses that Cuba and Brazil have in mind. The Brazilian government is willing to hire nearly 13,000 Cuban doctors, which would be a direct and immediate injection of tens of millions of dollars into the Cuban economy. Cuban health professionals are the backbone of the program ¨More Physicians for Brazil, ¨ with which Dilma Rousseff is responding to popular demands for better public health.

Even before the adoption of the new law for foreign investment, Brazilians already have white flag to invest in a sector that for over half a century was “closed”: the sugar industry. A subsidiary of Oberdrecht signed in late 2013 a contract for administration of September 5th sugar mill, in the central province of Cienfuegos.

Cuba -Brazil partnership is just beginning, and promises to add the South American giant to the same list in which China and Venezuela are, the two main economic partners of Cuba.