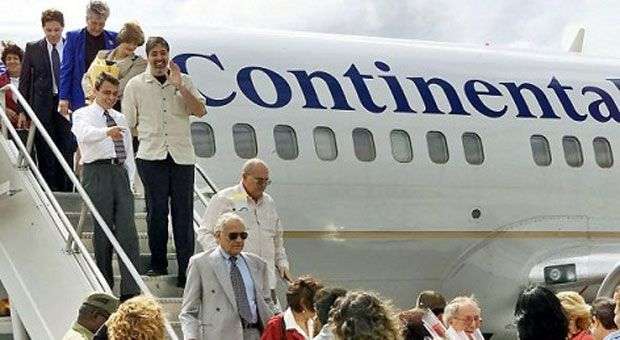 Despite efforts made by some people to add fuel to the fire on the US-Cuba relations, the prevalence of emotional ties between the two peoples motivates today many Americans to travel south to the island, where once many distinguished figures of American society walked.

And though silenced by mainstream media on both sides, the truth is that the United States now occupies the second place, after Canada, among the main countries of origin for tourists visiting Cuba, with nearly 630,000 visitors in the first half of 2013.

Of these, the vast majority (521 314) were Cuban-Americans, while the remainder were Americans that benefited from the presidential directive known as “people-to-people exchanges”, resumed in 2009 by the Obama administration.

From that time, U.S. charter companies ensured that the business has not stopped growing since the government lifted restrictions on visits to Cuban-Americans, and eased travel obstacles for academics, religious groups, artists and professionals.

According to the site Cubanet, as a daily average, about 1660 vacationers from the United States arrived in the island from January to July this year.

In that time period there were also 1950 flights from different parts of the northern nation bound for Havana, Cienfuegos, Camaguey, Holguin, Santiago de Cuba and Manzanillo, cities which houses the main tourist destinations in the archipelago.

With a frequency of 10 daily flights and aircraft with a capacity of at least 150 passengers, United States topped easily countries like United Kingdom, Germany, Argentina, France and Italy, which ranged between 60 000 and 90 000 arrivals in the first six months of 2013.

Skyking had the largest amount of flights during the period, and was followed by World Atlantic, American Arlines, Sun Country Arlines and American Eagle, reports the digital site.

The “people to people” allowed some 107,399 Americans to know Cuba-but not for tourism-, from exchanges between academics, religious groups, artists and professionals.

Local sources also point out that the number of Americans reaching the island through third countries like Mexico or the Bahamas, seeking to circumvent sanctions, avoid red tape or simply because it’s cheaper increased.

Recent statistics exceed expectations projected earlier this year by The Havana Consulting Group, which announced that the number of Cuban Americans visiting the island would reach 520 000, some 50 000 more than in 2012 .
On the topic, there are those who believe that the recent changes in immigration policy promoted by both countries (such as Cuba Migration Act issued in January and further easing of U.S. visas for travel), are putting against the ropes the Cuban Adjustment Act, passed in 1966 by President Lyndon Johnson.

That policy favors Cubans who make it to northern soil by illegal means, through financial compensation.

However, others believe that measures such as the provision of multiple visas valid for five years for Cubans visiting the United States for personal reasons, does not change the essence of the policy of the White House. Because if it constitutes a step forward in the migratory dialogues both governments undertake, paralyzed for nearly three years, the provision does not cover anything from people to people exchanges nor the bans for its citizens traveling to Cuba.

Hot spots, and bitter moments will always be at the negotiating table … However, only one figure is needed to understand that neither the 90 miles that separate Havana from Florida, will be sufficient to ward off a people from the other. 85 percent of the nearly two million Cubans who fled their country, who keeps in touch with family and friends from home turf, are currently residing in the United States.

In its most recent report, the National Bureau of Statistics and Information (ONEI) reported that in the first half of the year, 1,596,883 tourists enjoyed the Cuban attractions, representing two percent less than the amount of arrivals recorded during thesame period in 2012.
According to ONEI, Canada remained the leading emitting market, with more than 700,000 visitors, while Argentina was ranked as the leader from Latin America and the fifth worldwide.
The official report, with statistics from January to June 2013, indicates that the 29,586 less people came this semester, especially from Europe, a fact that could be marked by the current economic crisis in the euro zone.
Tourism, the second source of foreign currency for Cuba, behind the technical and professional services, meant in recent years income above 2 billion annually.
Despite the results Cuban tourism authorities are engaged in the search for new markets to encourage travel to Cuba.

Investment: a curve from January to December