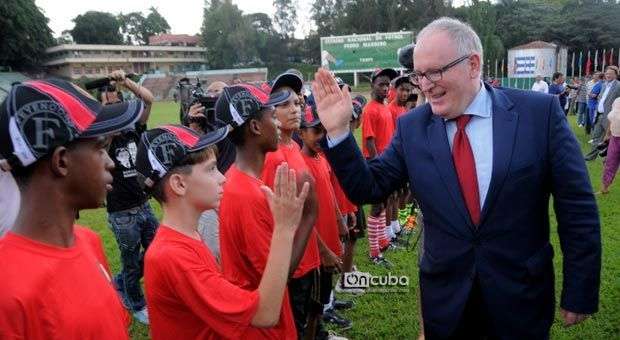 “It would be great to see Cuban players in Dutch football,” the Chancellor of the Netherlands, Frans Timmermmans said on Monday, after leaving inaugurated in Havana a football clinic that for about five days will be taught by specialist from the Feyenoord club from Rotterdam.

This project, which is attached to the former presence of foreign coaches and national teams in recent years, will be led by five technical and former players of the club, who will run until January 10 a program specially designed for young talents in Cuba, taking advantage of the experience of the franchise in working with this age group.

Feyenoord currently has one of the most respected schools in the Netherlands and almost every team in the league of the Netherlands has players who have developed their skills in this institution. In 2010 the Academy club received the Rinus Michel Award for being the best of its kind in the Netherlands. Out of Europe Feyenoord has schools of the same cut in many countries, most notably Brazil and Ghana.

To make matters more interesting, Feyenoord in Holland was one of the forerunners in the entry of football into professionalism, and it looks like the Europeans want to repeat the idea in Cuba, taking advantage of the relaxation of regulations for hiring Cuban athletes abroad.

The project is driven by club officials and some businessmen with interests in Cuba among which is Huigen Henni , CEO of the Nirint schipping company, in addition to the approval of the Dutch authorities. In this regard, Timmermmans said : ” We want to share that experience with Cuba because we believe Cuba for its tradition in this sport can achieve good level .”

In sporting terms , the European diplomat , who carries out a working visit to the island, told the children gathered there to receive classes that the most important thing today “is playing football in Cuba ” , in order to develop the basis of sport within the country.

Timmermmans also explained that in the Netherlands there are over a million members of the football associations and assuming the position now occupied by a job has been maintained through several generations. Moral: there is an expeditious way for the Cuban soccer.

Regarding expectations for the World Cup, Timmermmans laughingly said that “it is due time for we to win! We have reached the final three times and have always been seconds. “

In another sense, the Dutch minister welcomed the excellent relations between the two countries, which march smoothly. He also showed his confidence that to the extent that Cuba has made social and economic transformations, the EU must change its relations with the country.

Feyenoord is the third major team in the Dutch league, accumulating 11 domestic titles in their windows, in addition to winning the UEFA Cup in 1974 and 2002. In its 108 years of existence, is the only in the Netherlands that has always been at the pinnacle of the sport.

Through its roster true legends of world football have paraded, most notably star Johan Cruyff, Giovanni “Gio” van Bronckhorst and Roy Makaay. It is likely that due to its history is the most popular in the Netherlands, despite not having relevant actions in the past editions of the domestic tournament.

For now the truth is that Feyenoord is in Havana, and its coaches are groping the Pedro Marrero pitch in the company of young Cubans who have grown up watching the best of world football. An undoubted step forward in raising the aspirations of the quality of the art in Cuba, and looming, why not, a future in which some Cuban players to gain a place in European leagues as others have done in the United USA.