A feast for the palate in Havana 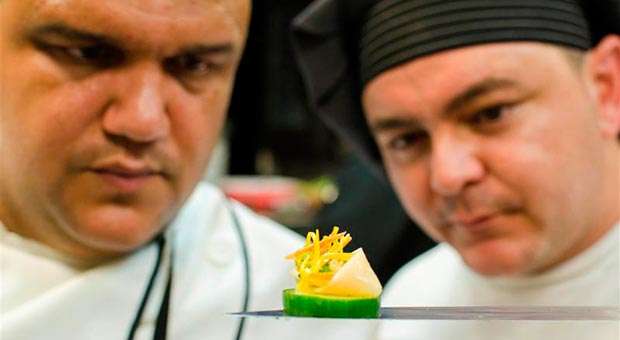 The 2nd Gourmet Festival: Tastes of Cuba and the world , taking place in Havana until 30 November, is an attempt to rescue the culture of good food and the culinary heritage of our country. This initiative, supported by the Office of the Historian of Havana, led by Alicia García and Ana Busquets and sponsored by companies like Habanos SA , VIMA , Havana Club, Cubacafé, among other – are added to other projects currently that in the world advocate in defense of the native food , but has the distinction of making art as a starting point to reflect on the centrality of expressions of traditional cuisine in the Cuban identity.

“The culinary theme is one of the irreplaceable contents of art. Through painting, photography, film and literature, we reassess this fundamental aspect of our character. In the practical sessions, demonstrations and tastings of food, we intend to demonstrate that our most everyday cuisine can also be gourmet , ” Garcia told OnCuba , sure ” that quality may be provided when there is creativity, both with simple products available to us as other finest . The daily food, the farmer ‘s and the city dweller’s , the professional and the workers , can also be refined , it is necessary to know how to set the table, enjoy what we have and above all, share our traditions. “…

Under these provisions, the Gourmet Festival is a suitable space since its first edition for socializing reflections, investigations and actions that have in common the desire to add value to the culinary customs of the Island. The Ajiaco Cimarron project, which emerged from the initiative of seven Cuban chefs to promote the revival of our cuisine from a contemporary look, is an example of the efforts made in this regard by both the state and private sectors.

This group of culinary specialists aims at working in communities, in direct contact with the people, and from there to encourage the stylization of everyday meals. “We need to quit haute cuisine, luxury and inaccessible to the public. With the resources at their disposal Cubans can do wonders at home too, “Chef Veimar Loyola, one of the members of Ajiaco Cimarron said, who along with his friends shared with participant’s recipes and dishes to suit our current conditions while still being delicious.

Similar but larger experiences in countries like Peru , are role models from Cuba due to its broad impact on the economy and culture. This was demonstrated at the conference on Peruvian cuisine by Mr Victor Mallorga – Ambassador of the nation on the Island – who talked about the importance they have given to the rescue of the traditions of their nation for diversity culinary heritage “living national and international boom at present.” In this regard, he said that this line has become the second attraction, preceded by the ruins of the Inca city Machu Picchu. “These efforts are part of the struggle to maintain our cultural independence and have our own place in the world ,” Mr. Mallorga told OnCuba.

Also, the first session of this Gourmet Festival , which has used as the headquarters the Casa de Mexico in Centro Havana , included the opening of the exhibition of drawings ” Undercover ” and photographic ” Still Life : light and the senses “, ” from the kitchen to the eye “,” the white liquor of the Mayahuelt goddess “and” the lens facing the Habano ” . The event program also includes a film series at the Lumière Cinematograph , consisting of a list of films of gourmets headed by singular Strawberry and Chocolate, Cuban film directed by Tomás Gutiérrez Alea and Juan Carlos Tabio. The scenes of the Lezama lunch and conversations between Diego and David accompanied by tea from India, marked the beginning of this event marked by the spirit of art and good food.

For the next few days they have scheduled several lectures, discussions, audiovisual projections and tastings of dishes and drinks native of Cuba and other countries such as Mexico. With a coffee ended the day on Friday November 29 at a meeting that saves several times to the confluence of thoughts surrounding the Cuban culinary heritage and actions to rescue it. While the “juicy” exchange with the inspiration of the creative act takes place, these days in Havana continues the feast of the senses.