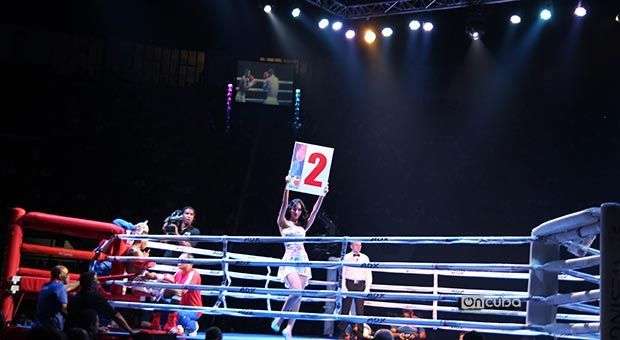 The Cuban Domadores swept the Russian squad in a match that marked the debut of the Ciudad Deportiva Coliseum as a venue at the Fourth World Series of Boxing. This result kept the unbeaten Cuban team as leader of group B and extended to fifteen the number of consecutive wins of its boxers.

The stands of the Coliseum were crowded and the audience fully enjoyed a special night. Its supporting to his boxers was felt throughout the evening and included some trumpets that did not want to miss the event. Thousands of whistles were everlasting companions to the passage of models that heralded the beginning of the rounds.

On Thursday, during the press conference at the Melia Habana Hotel, the European head coach Lebziak Alexander, Olympic champion in Sydney 2000, had noted that they brought a third-rate team that came in search of development. What happened in the ring of the Coliseum confirmed the validity of his words.

In the fight that started the match Yosbani Veitía Spiritus (49kg) easily defeated Sagaluev Bator. After an explosive first assault that highlighted the significant inferiority of the Russian boxer, Veitia focused on boxing from the outside, in addition of giving the public sporadic exchanges in the short distance which was more effective. In the end, unanimous decision 3-0 (50-44, 50-45, 50-45) and Veitía reached its second win in the series.

The temporary suspension of the London Olympics champion Robeisy Ramirez and world medalist Yasniel Toledo for absences to training gave the chance to Granma Marcos Forestal (56kg) and Matanzas Luis Oliva (64kg) to debut in the competition. While both were victorious, their performances left much to be desired.

Forestal won by split decision 2-1 ( 48-47 , 48-47 , 47-48 ) over Mukhammad Shekhov in fight that ended just started the fifth assault due to a cut suffered by the Russian in the left eyebrow . Then Oliva beat Radzhab Butaev 3-0 (48-45, 47-46, 48-45). Both bouts were extremely lackluster, marked by constant grips, heads down too often and other technical deficiencies which led to continuous interventions of the judge.

In the 75 kg Ramón Luis had a great fight against Andrey Efremenko , confirming the excellent condition shown during his debut in the match against the Mexican Guerreors. This time he hit freely with both hands, had little pressure and the last three rounds he lowered his guard all the time. The final decision was 3-0 (49-45, 50-44, 49-45) , even though two of the judges saw the final round won by the European fighter. The exquisite job of the Camagüey boxer was validated by the public with prolonged applause.

The closing the evening was in charge of Guantanamo Erislandy Savon (91kg) who defeated with identical 50-45 Vitaly Kudukhov, unique visitor who accumulated some noteworthy history (six wins and four losses in previous editions of the World Series) . In a fight that was tangled at times, Erislandy used his greater reach to connect the most effective punches. In the fourth assault a pair of clean rights to Kudukhov face made many think on the possibility of TKO but if something the Russian boxer showed was physical strength and endurance.