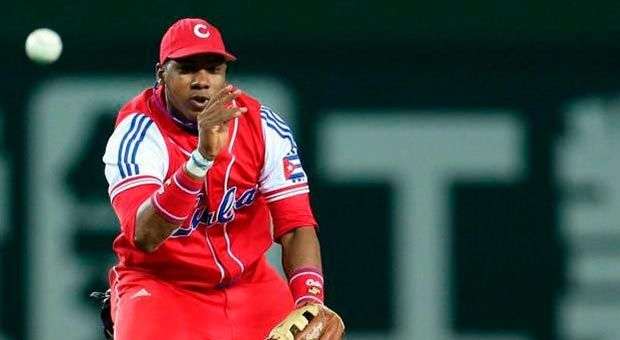 Cienfuegos shortstop Erisbel Arruebarruena this weekend will have a tryout in front of MLB scouts. The showcase will take place in the New York Yankees complex in the Dominican Republic.

As reported by several websites devoted to Cuban baseball, among the clubs that should send scouts to the Caribbean Island highlights the Mets, which already openly expressed interest in the “Cricket”.

Arruebarruena played for six seasons with Cienfuegos team in the National Series. Here he played alongside the star outfielder for the Dodgers Yasiel Puig and José Dariel Abreu, recently signed by the White Sox, which was a record contract for foreign free agents in the majors (68 million-6 years).

Admirer as a child of Germán Mesa and today supporter of Dominican shortstops Jose Reyes and Hanley Ramirez, the “Cricket” was excluded of his team prior to the commencement of the 53 series of Cuban baseball. The argument made by the Federation, “serious indiscipline in training”, wanted to hide an attempt of illegal departure he made in September. Weeks later Arruebarruena managed to emigrate.

In the Cuba team he participated in several international events, including Panama World Cup and the Guadalajara Pan American Games, both held in 2011 and the III World Classic in March. In this last event he averaged .375 thanks to six hits in sixteen innings, scored four runs and drove in two.

Erisbel is 23 and is known for his excellent defense, marked by his extensive range both ways and the power of his arm. In an interview he gave in 2012 to Prensa Latina he had commented on his work with the glove “I know, I know when I have a chance to get an out and when not;. In the first case I do not like to stay with the doubt and shoot” At bat he has been showing progress that allows considering him as an average hitter.

His name should join next season in the majors at several Cuban shortstops who play in that circuit: Yunel Escobar, Jose Iglesias, Alexei Ramirez, Adeiny Hechavarria, Yuniesky Betancourt, although the latter was occupying various positions with the Brewers this year, and also Alexander Guerrero who signed by the Dodgers, maybe to play second base.

Hauser: A festival to think our cinema

The return of Cuba to the Caribbean Series is not definitive