Minneapolis to Cienfuegos … and vice versa 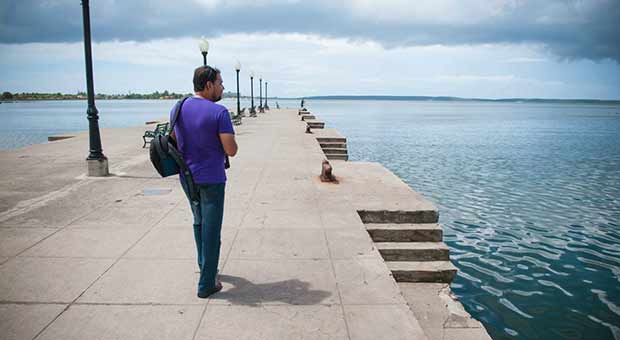 In one of the groups that each week visit the city of Cienfuegos since the Obama administration reopened the People to People exchange program, came Mariessa Ryan, an artistic Minneapolis developer who insisted on taking up to her city a taste of what she observed in the Caribbean town.

Two years after her first trip she is about to get her wish , since in the first days of June painters Adrian Rumbaut and Camilo Villalvilla , photographer Omar Valenti and troubadour Nelson Valdés will leave for the United States; the first group of Cubans who travels to American soil as part of the U.S. Cuba Artist Exchange initiative.

Just in April Mariessa and several colleagues were on the island to refine the final details and complete the Cuban side of the exchange , playing rap and painting together a mural on the facade of the house of musician Valdés.

Between April visitors were Dane Whitehead and Paul Irmiter , filmmakers who filmed that part of the story to complete it once the entourage lands in Minneapolis.
“After being in Cuba this year we are more determined to create a long-term program that provides many opportunities for cultural exchange and artistic collaboration. Create works together is a way to communicate through art and share those messages with the public, “promoter Ryan told OnCuba from Minnesota.

” Mariessa has bid a lot for this meeting , and even came to see me last year to San Antonio, Texas, when I was over there exposing and always was very optimistic with the completion of the trip ,” visual artist Rumbaut told us in Cienfuegos.

“I’m very happy because finally I will meet with American culture and an America that are different from the one idea that has made us the proximity of Miami,” young singer Valdés said meanwhile

“It’s an opportunity of all kinds, then surely I can even gain access to certain tools and technologies that are very expensive and very scarce here; plus they listen to my music and I will even record some songs with American musicians and Cubans living there, “he adds.

“The higher purpose of our organization is to improve relations between U.S. and Cuban citizens by collaborating in the creation of art and exposing it in the two countries,” Ryan explains.

“It has taken some time to organize properly and work with our Cuban colleagues to make sure to get a solid program those benefits equally citizens and artists. The main barrier is getting visas for Cubans traveling to the United States. We have worked within the confines designed by the two governments, so plan has taken time, but neither has been extremely difficult, “she explains.

“I know many Americans and most are surprised by the scope of art education that exists in Cuba, which is of course the basis for the variety of proposals that they see here. In addition to these is very novel exchange with people in neighborhoods, as we did while we were painting the mural on the Nelson House where anyone is coming to give us a cup of coffee. Similar feelings of discovery of the Other I’m sure we will live when we are there, ” Rumbaut envisions.

At least much hustle they will have since the Minnesota program includes exhibitions, musical performances and exhibitions in galleries where Cubans can teach how they make art.

“Our hope is also increasing support from donors in order to have more money and continuing to make programs like this in other cities,” Ryan adds, as new details of a project that began as a dream and today I a reality.