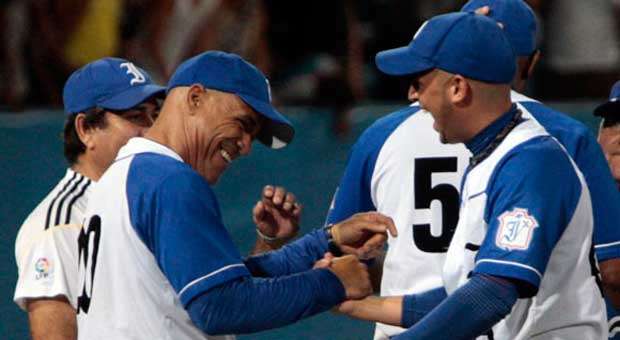 The journey of some veterans of Industriales team to the U.S. for celebrating the 50th anniversary of the blue squad has been an ordeal. But it starts to take shape after some weeks. At least the players will travel on Sunday to Miami.
Juan Padilla and Lazaro Vargas, two of its most faithful stars, told OnCuba that this is a unique opportunity to unite players residing in both countries, regardless of their affiliations policies or motivesthey someday had to take certain decisions.
“The important thing is to play baseball and show that through baseball, we are capable of overcoming any obstacle. After all, that is the aim of the sport: unifying, promoting and encouraging peace, “Lazaro Vargas said after a training session at the Havana´s Santiago “Changa” Mederos stadium, where a group of ten ex stellar players is training in order to get in the best conditions to Miami.
“We’ve been training since Alejandro Canton, president of ¨Somos Cuba¨, talked to us about his interest and desire of realizing a project to and for baseball, and especially when the reason is celebrating the birthday of Industriales, a team beloved by millions of people in and outside the country, “Padilla, excited about the possibility of realizing a dream, stated.
“It will be a great experience for everyone because we all, those from here and there, know the meaning of wearing the jersey of Industriales, and that is just what we will honor those who at some pointdefended these colors, as well as those who were our opponents and lived in a special way those remarkable battles, “Vargas told in clear reference to the games they will have on U.S. soil.
In addition to Padilla and Vargas, the other members of Industriales that will travel to USA are the catchers Pedro Medina and Armando Ferreiro, infielders Rey Vicente  Anglada, Enrique Diaz and Tony Gonzalez, outfielders Armando Capiró and Javier Mendez, and pitcher Lazaro Valle, who will first face a team of former players of Industriales who are settled in Miamiand then both squads will play together against another group of Cuban players who also live in the United States.
Undoubtedly, many rumors and speculations have been raised on how the manager Pedro Chavez will coach the small amount of Cuban players, especially the dilemma of knowing who of the infielderswill play in the outfield, and who will be Lazaro Valle’s relief pitcher if he is not in his best day in the mound.
Regarding the second variant, in which both teams, again with the same uniform, will face players from other Cuban provinces, the public could see figures like Manuel Hurtado, Julio Rojo,   Angel Leocadio Diaz, Rene Arocha, shortstop Rey Ordonez, and two historic symbols of the squad: first baseman Agustín Marquetti and pitcher Orlando “El Duque” Hernandez.
The truth is that those who play, regardless of their position in the field, will enjoy disapproving those who opposed the idea, and preferred stepping aside in the organization of the appointment.
Honestly, this project makes justice to Industriales after an absurd silence in Cuba on half a century of history of this team, which has been barely addressed by the country’s media and baseball authorities, both provincial and the national federation, who also had the responsibility of paying tribute to the most famous squad of Cuban baseball, haven’t even organized a celebration.
Hopefully this will break a door and soon, before Industriales´ centenary, we could celebrate too, in its sanctuary of the Latinoamericano Stadium, the 50th anniversary of the blue team of the capital.