Reineris Salas: A Cuban “gymnast” on the podium 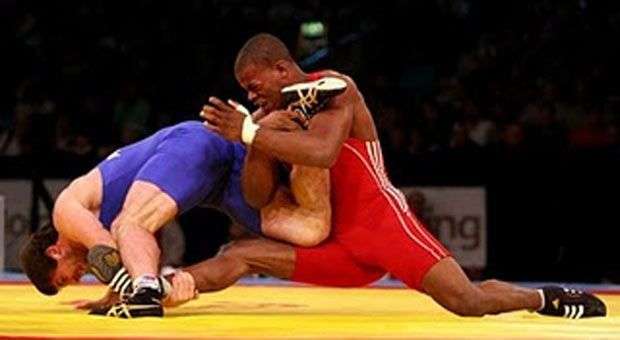 Another day in which we were just one step shy of the top. However, this silver medal is also a matter of rejoicing for fans of the Cuban wrestling. Reineris Salas, the “gymnast”, had a luxury return to World Cups with his second place in the-84kg division, held at the Lazlo Papp Sports Palace, in Budapest, Hungary. Between yesterday and today, we have had two podiums that have begun to undo unflattering forecasts.

Prior to the event there were many skeptics, as well as the causes that went hand in hand to bring about this state of doubt. Incomplete teams were attending in both styles and among girls, the international exposure was conspicuous by its absence, and to make matters worse training bases in the face of previous tournaments were made in Europe, this time had not been part of the agenda.
Those were reasons to put aside favorable predictions and better sit and wait.

To the delight of all, the story Cuban wrestlers are writing on Magyar mattresses is on good track. Let’s look then at what happened to that boy who once walked among pommels, rings and horizontal bars. If yesterday the also silver medalist Livan Lopez (66kg) had to fight with an army composed almost entirely of Asian fighters, today there was European majority among Reineris challengers. In his debut he beat Uzbekistan 4-0 Zaurbek Sokhiev (2009 world champion) and minutes later he repeated the dose, this time 3-1 to German Seregelyi Gabriel, fifteenth of the world list.

In the quarterfinals his victim was the Iranian Ehsan Lashgari Naser, who incidentally had won his previous fight to the number one ranking, Georgian Dato Marsagishvili. Now for a spot in the title discussion, Reineris stopped the momentum of another representative of the Old Continent, by dominating 3-1 Russian Spanish Taimuraz Friev.

The final was a rematch of the fight held in Moscow in 2010. There Reineris had not had to sweat in May, beating, discussing bronze, the Ukrainian Ibragim Aldatov. This time it was train wreck and the Europe overcame 8-1, which ensured him the primacy of the division.

Congratulations to Reineris by this subtitle that is even of a higher dimension when you consider that this boy was separated a time of national preselection for indiscipline, managed to maintain the motivation and desire to resume the route drawn in his life story, and the last month fought very hard to establish himself again as the leading figure of the island in the-84kg.

That’s two boys of Professor Julio Mendieta who have been just a few moments away of humming “… the gold is mine…”. With these magnificent performances Cuba manages to keep the streak started in 1982 of 24 world championships in a row obtaining at least one medal adding both styles, almost anything, do you think? From Oncuba we will continue abreast of their work.

Robertico Carcasses “I have never ceased being optimistic”

The noises of the night