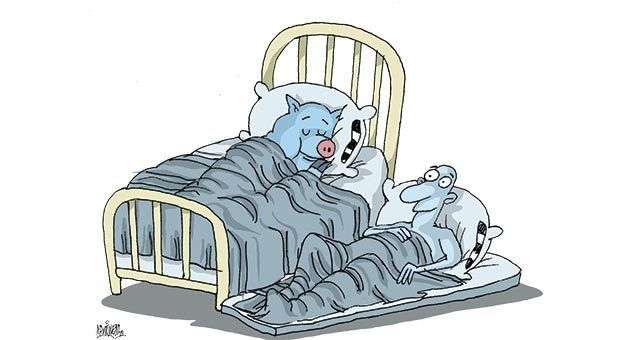 out of mystical vengeance.

I bring a unique proposal.

…Oh, that is why my proposal is so peculiar:

That is a song by the popular Cuban music group Buena Fe. The thing is, for the inhabitants of this Caribbean island, the pig or swine is more than food; it is part of our culture, our idiosyncrasy, and it is even almost part of our family.

Generally speaking, for any Cuban who is proud of being one, there is nothing more delicious than a nice dish of arroz congrí (black beans and rice), yucca with mojo sauce, and a helping of fried or roast pork.

pumped by its heart.

At every festivity or celebration, this food is necessary and indispensable. It was brought to Cuba five centuries ago, and delights not only national diners, but also those from abroad who come in search of the best of Caribbean cooking.

Who’s ever seen a New Year’s

without that cloud of aroma

whether in rich neighborhoods

or the humblest hills.

There are dates when pork is the absolute center of everything. Tradition, marked by our ancestors, convenes the family for New Year’s Eve dinner around a roasted pig. While this custom has been affected by financial shortages, most people on the island still set aside a little savings so that they can at least enjoy a pork steak to ring out the old year and welcome the new.

But pork is not just essential at the traditional meal and the most important festivities; for any self-respecting Cuban who invites friends over for a good time, it is most likely that the glass of rum is accompanied by a plate of pork cracklings, a “little bite” that that makes the chitchat more enjoyable.

Other parts of the animal are used for a range of dishes. The feet give an exquisite flavor to beans, and the head turns a caldosa (traditional stew) into a delicacy that even the most aristocratic person will savor. And what would a tasty tamale be without at least a few little chicharrones!

Chunks of pork in wine

for the most elegant intellectual.

You can set anyone’s mouth to watering when you talk about chunks of fried pork, well-toasted cracklings, or a nice pork steak. And let’s not forget about byproducts like ham, sausage, blood sausage, butifarra sausage, bacon, etc., that give this animal added value.

But for Cubans, pigs are more than food. Many homes have one as their principal source of income. As the song’s lyrics so accurately express, in the farmer’s markets, pork acts as the Dow Jones Index that regulates the prices of many products.

defying the rules of hygiene…

For that reason, quite a few people raise pigs, in some cases to meet a specific goal: their daughter’s Sweet-15 party, a new TV…. Sometimes it’s to increase their capital, or simply to guarantee the celebration of a special day with the assurance of knowing the source of their meat. This practice is also explained by the particular characteristics of pigs, such as their precociousness, short reproductive cycle, and capacity to transform nutrients.

It is not just an accessible source of food, because for a very long time, even when there were more affordable options, pork was the king of the dinner table.

The church should make it a saint.

And even though today some people deny themselves this pleasure thinking that the meat is harmful to their health because of its high fat content, there are studies that have undertaken to refute that myth. What’s certain is that the nutritional value of pork makes it one of the most complete foods for meeting the needs of human beings, and its consumption could contribute to improving one’s quality of life.

A monument should be built to it.

To a great extent, this is due to the fact that some time ago, lower-fat varieties of pork were created that are healthier for the human body, making it a very nutritional, balanced food. Many experts agree that several cuts of today’s pork are just as lean, or leaner, than a portion of chicken or beef.

The nutritional elements of a piece of pork include: iron, magnesium, phosphorus, potassium, zinc, and vitamins B1, B2, B3, B6 and B12.

For all of these reasons, and even though I, too, have no idea whether the President would agree, I raise my hand to support Buena Fe’s proposal. I vote for the pig: National Mammal!