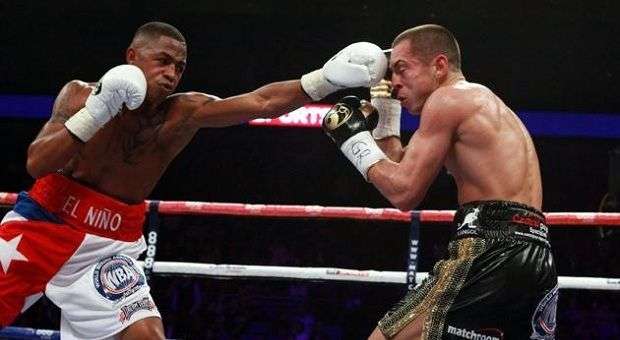 Cuban boxer Yoandris Salinas could only draw against England’s Scott Quigg, in a fight held yesterday for the WBA world title in the division up to 122 pounds. Through this result, “El niño” (the kid) was unable to access the “regular” crown of this weight, still in the hands of the British fighter, who presumably will face the great champion of this weight Guillermo Rigondeaux .
The bout, to twelve rounds, took place at London’s spectacular O2 arena, where some 20,000 fans were all the time supporting the local boxer, who nonetheless deserved the verdict. Two of the judges voted equality to 114 but the third, Ruben Garcia, saw the Cuban to lose 113-115.
Salinas was very impetuous during the initial rounds of the fight, taking the threads of it without much difficulty. But when reaching the closing rounds, he began to show physical tiredness, which limited his movements, reduced his hitting sequences and this enabled Quigg to have a better performance before his fans who did not stop to encourage him, thus ending in better shape than the Caribbean boxer.
With this tie Salinas, who is part of Miami Dream Team and is trained by Osmiri Fernandez, at least manages to remain undefeated in his professional career, 20 victories, 13 of them by KO-and 2 draws. His debut in professional boxing dates from December 4, 2009 when he defeated Felix Flores by unanimous decision. In these four years he has successfully fought in the rings of U.S., Dominican Republic, Peru, Nicaragua, Panama, Mexico and Costa Rica, and holds the WBA Fedebol and WBC Latino Super titles, both won in 2011.
During his amateur career the “Kid” carried out ​​over 300 fights, becoming the first man of the 51kg on the Cuban national team in 2007. His main results were the bronze medal in  Rio de Janeiro 2007 Pan American Games, also in that year he was crowned champion of the continental boxing competition held in Venezuela. He was twice Cuban national champion, 2006 and 2007, where he also won the gold in the famous Cardin tournament.
While in Cuba, Salinas , who was born in 1985, fought with several recognized quality fighters, including London 2012 Olympic champion Rosniel Iglesias, who defeated him once. He also faced the world medalist Andry Laffita and Yankiel Leon in several occasions.

Tony Avila: “The album we make it in concerts”

Tony Avila: "The album we make it in concerts"