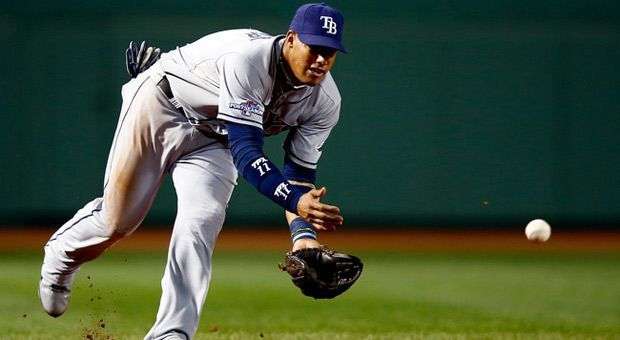 In this century none Cuban player has been awarded the Golden Glove at MLB. This season i s perfect to put an end to that drought. Among shortstops nominated by the American League was Havana’s Yunel Escobar, and his statistics with Tampa Bay showed him as favorite of many to win the prize.

The award ceremony , held on Monday, left us with the desire and even some found it an injustice. The managers and coaches of the thirty teams of the circuit, who were in charge of making the selection, showed preference for the Orioles’ shortstop J. J. Hardy. The Phantom of the occasion, when, for the vast majority of Cubans Alexei Ramirez was harmed before the Yankees mega star Derek Jeter, began to haunt again.

In my case, since the decision may be logically mediated by Yunel´s condition of countryman, I rather let the statistics to speak. Even the new dimensions they have achieved today become a handicap when making comparisons between two players. Anyway, here I offer you some of the stats achieved ​​by the Cuban and Hardy. Those who wish to know more novel statistics can click the names of both players on the site: www.baseballreference.com .

If he had won, Escobar had become the fourth Cuban shortstop to receive this distinction. The first one was Zoilo Versalles who obtained it in two occasions (1963 and 1965, with Minnesota Twins), Leo Cardenas also did it in 1965, but in the NL (Cincinnati Reds), and finally Rey Ordoñez managed to achieve three consecutive Golden Gloves (1997, 1998 and 1999).

This award was created in 1957 by Rawlings, a company of sports items and equipment. In that season the Cuban stellar left fielder Orestes “Minnie” Minoso emerged as the first Latino to win the award, playing for the Cleveland Indians. In 1959 and 1960 he repeated the condition, although this time he was defending the colors of the Minnesota Twins. The other Cubans who have treasured Golden Gloves in the “Majors” are Tony Oliva (1966, Minnesota) and first baseman Rafael Palmeiro (1997 and 1998 with Baltimore Orioles and in 1999 with Texas Rangers).

Among the winners of this year it is worth mentioning two infielders whose ancestry is closely related to Cuba. His father is from the Cuban province of Guantanamo and his mother is Puerto Rican, the Colorado Rockies third baseman Nolan Arenado was awarded the prize in his debut in the majors. This had not happened since 2001 when Ichiro Suzuki, a worldwide baseball iconic, debuted. Arenado played as an entire consecrated, he just made 11 errors in 411 chances, for an average of 973.

Eric Hosmer, first baseman of the Kansas City Royals made just 8 errors in 158 games ( 1335 chances and average of 994). His mother is Cuban and his father is American.

It is noteworthy that in this 2013 it was also nominated Granma’s Yoenis Cespedes (LF, Oakland Athletics), which is unequivocal evidence of the improvement he has been achieving in his defensive statistics. As left fielder (because he also played 16 games at center field) he had 4 errors in 200 chances, averaging 980, plus he put 9 runners out. His rivals in the ratings were Andy Dirks (Detroit Tigers) and Alex Gordon (Kansas City Royals).

Finally we offer you the full list of MLB 2013 Golden Gloves: