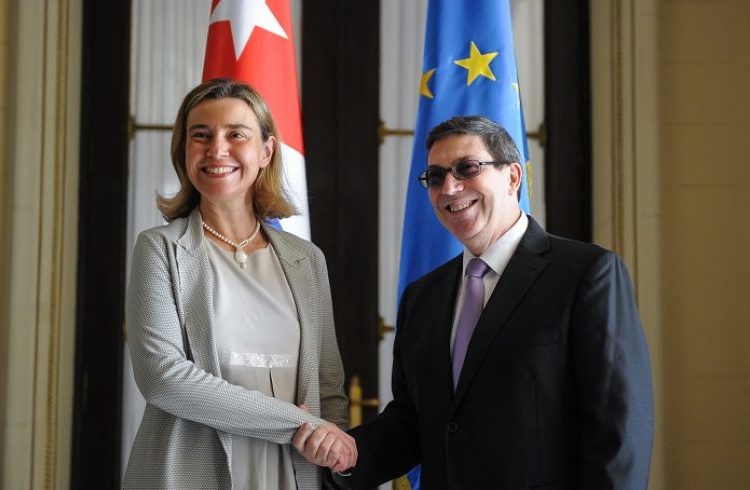 The European Union (EU) approved this Tuesday annulling the so-called common position on Cuba which for 20 years governed its relations with the island. After the decision was made last week on an ambassadorial level, it will finally come into force when officially approved by the 28 member countries of the community bloc.

The next step of the new European policy toward Cuba will be the signing of an agreement with the Cuban government next December 12 in Brussels. The agreement, which includes chapters on political dialogue, cooperation and trade, will be signed a few weeks after the death of Fidel Castro, who ruled the country when the common position was established.

“We are in a real point of reflection in our relations. Through this new agreement, the EU is showing its will to support Cuba’s economic and social modernization process,” High Representative of the European Union for Foreign Affairs and Security Policy Federica Mogherini pointed out in a press release.

Cuba is the only country in Latin America that until today does not have an association or cooperation agreement with the EU. To remedy this situation, the European executive and the island’s government started two years of negotiations until this March’s closing of the diplomatic framework that will be signed in a few days. It is expected that Foreign Minister Bruno Rodríguez, representing Cuba, will travel to the Belgian capital.

“Cuba particularly recognizes the high political significance of the decision…,” Deputy Foreign Minister Abelardo Moreno said in a press release. “The decisions made by the EU create favorable conditions for the signing of the mentioned agreement, which for the first time will give the relations between both Parties a reciprocal, respectful and mutually advantageous contractual framework for the development of the political dialogue and cooperation, including the facilitation of trade,” he added.

In September the European Commission, the executive body of the EU, had officially proposed to the bloc’s member countries to back the agreement negotiated with Cuba. Consequently, it had encouraged its members to annul the previous restrictive policy established in 1996, promoted at the time by the president of the Spanish government, José María Aznar, which conditioned the negotiations between both parties based on the advancement of human rights issues on the island.

In its first point, the so-called common position sustained: “The objective of the European Union in its relations with Cuba is to favor a process of transition toward a pluralist democracy and respect for human rights and fundamental liberties.” It also states the need for a “sustainable recovery and improvement in the standard of living of the Cuban people,” although not through coercive measures that will increase the economic difficulties of the island’s population.

Moreover, it noted its interest in modifying “the national legislation regarding political and civic rights” and announced that it would maintain the humanitarian aid. But the latter would be distributed “through non-governmental organizations, the churches and international organizations.”

After the European Commission’s suggestion for its annulment, Federica Mogherini had commented that the signing of a new contractual agreement would create “a clear common framework for an intensified political dialogue, greater cooperation in a wide range of political areas and a valuable platform for developing joint actions in regional and international affairs.”

The agreement, titled Agreement for Political and Cooperation Dialogue, will have a first provisional application awaiting its ratification by the European Parliament, as well as independently by the 28 countries of the bloc.

This provisional agreement will only refer to spheres of Brussels’ exclusive competence like cooperation for development and trade, and will come into force some two months after Havana officially informs the EU its will to apply it. In case this official communication occurs in December, the agreement would come into force on February 1, 2017, according to reports by the AFP news agency.