Alberto Fernández’s statements were issued almost at the end of an exclusive interview for the Argentine C5N channel about the results of his recent European tour, as well as about the measures taken to stop the outbreak of coronavirus in Argentina. 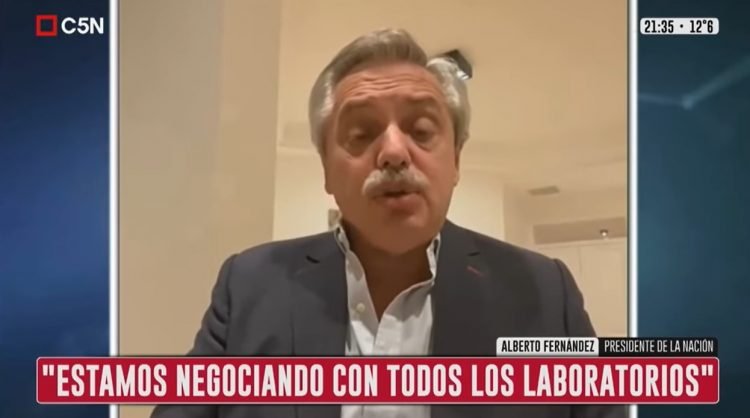 President Alberto Fernández during his interview with journalists from C5N.

Argentine President Alberto Fernández reiterated this Sunday night that his government is working with Cuba so that the Soberana 02 vaccine candidate completes its trial process, and in the same way they are assessing how to contribute to its production.

The president’s statements were issued almost at the end of an exclusive interview for the Argentine C5N channel about the results of his European tour that recently took him to Lisbon, Madrid, Paris, and the Vatican. In the conversation, he discussed, among other issues, Argentina’s debt with the IMF and the measures taken by his government to stop the outbreak of coronavirus, as well as the status of vaccination.

At the end of April, Argentine Foreign Minister Felipe Solá met with the Cuban ambassador in Buenos Aires, Pedro Pablo Prada, “to discuss the Argentine proposal that links financing with greater production capacity for Cuban vaccines.”

“Our country is waiting for the completion of the talks at the presidential level with the objective that, once they are concluded, to be able to accelerate the possible agreement,” Solá said in statements released by the Argentine Foreign Ministry, which also underlined the dialogue “about another Cuban technology input: a drug for nasal use that prevents a high percentage of viruses from entering the nasal mucus.”

Shortly before, Cecilia Nicolini, Fernández’s advisor, had said in a radio interview that the president was in dialogue with Cuban President Miguel Díaz-Canel and that they were “making available the possibility of conducting clinical trials or the production of this vaccine (Soberana 02) in Argentina.”