The MINSAP also reported four deaths as a result of the SARS-CoV-2 virus, with whom the death toll rises to 244. 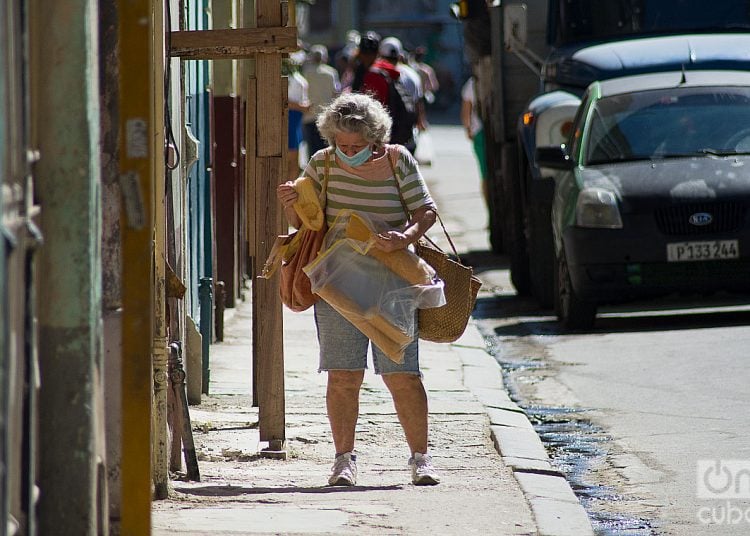 An elderly woman with bread and other purchases walks down a street in Havana during the outbreak of COVID-19 in January 2021. Photo: Otmaro Rodriguez.

Cuba surpassed a thousand daily discharges with the 1,099 patients who recovered from COVID-19 today, the highest figure after the one reported on February 1, according to the report published today by the Ministry of Public Health (MINSAP).

The MINSAP also reported four deaths this Monday as a result of the SARS-CoV-2 virus, with whom the death toll now stands at 244.

They are three residents of Havana municipalities, a woman aged 83, a man aged 60 and another aged 92. Meanwhile, the fourth death corresponds to a 79-year-old woman living in the special municipality of Isla de la Juventud.

In terms of new infections, today’s 580 represent the lowest number of daily cases from the pandemic reported in the last 15 days.

Most were detected in Havana, which diagnosed 292 patients and now appears as the first territory in terms of incidence rate, with an index of 258.89 per 100,000 inhabitants.

By daily cases, the capital is followed by Santiago de Cuba (87), Mayabeque (35), Villa Clara (31) and Holguín (22). All provinces reported COVID-19 infections this day.

Of the 580 of the day, 562 are due to autochthonous transmission and 18 were imported, with a higher incidence of travelers from Russia, the United States and Spain.

For today’s diagnosis, 19,322 samples were processed, according to the MINSAP, which reported 68 people in intensive care: 35 in critical condition and 33 in serious condition.

The patients under surveillance reached 16,215, while the confirmed active cases fell to 5,071.

February accumulates 6,472 cases of coronavirus and 28 deaths, despite the fact that the numbers have decreased in recent hours. The data continues to be worrying if control is not maintained and with it the decline in records.