Five deaths and 858 new infections. In both statistics, Havana presents the most alarming situation. 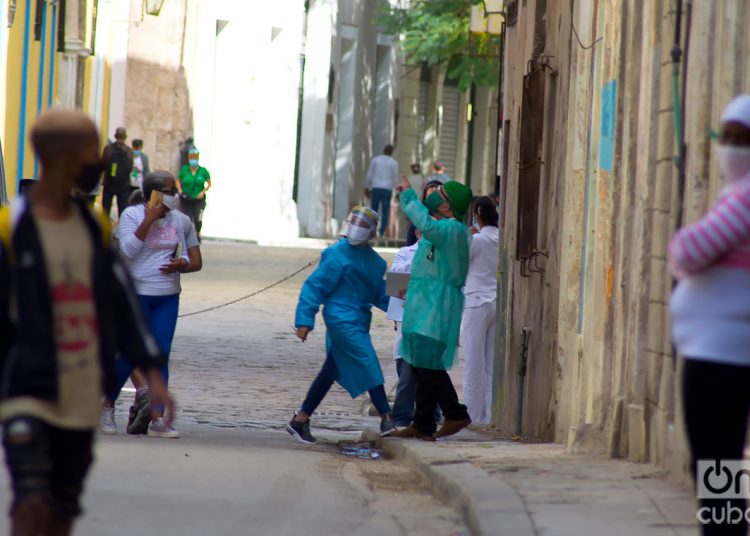 Health personnel in Havana, during the current outbreak of COVID-19, in February 2021. Photo: Otmaro Rodríguez.

This Tuesday there were five deaths from COVID-19 and the new infections amounted to 858 to reach close to 35,000 cases, according to the Ministry of Public Health (MINSAP). In both statistics, Havana presents the most alarming situation.

The new fatalities, with which the death toll now stands at 249, come mostly from there: three, residents of 10 de Octubre, Boyeros and Centro Habana; all men between 68 and 77 years old. Meanwhile, the remaining two were from Mayarí (an 80-year-old woman) and Guantánamo (a 49-year-old man).

In addition to being at the head of the territories in terms of incidence rate (269.76 per 100,000 inhabitants) and with eight municipalities among the 12 that concentrate 53.2% of transmission in the last 15 days, it is also the province with the highest number of people diagnosed with COVID-19 on this day, 438.

By far, it surpasses Guantánamo (171) and Santiago de Cuba (110), two of the 15 regions that reported new infections from SARS-CoV-2 in the last 24 hours, when the majority of the total (858) were by autochthonous transmission

Only in eight individuals was the source of infection located abroad, and the countries that continue to have the highest incidence in this regard are the United States and Spain.

In addition to what has already been written, a great many of the 67 patients who are in intensive care—31 in critical condition and 36 in serious condition—are in hospitals in the capital.

However, Matanzas and Santiago de Cuba also have a notable number of coronavirus patients in their ICU, a situation that, to a lesser extent, is repeated in almost all the provinces.

The day’s discharges amounted to 981 and 19,717 samples processed throughout the country.

Until midnight on Tuesday, February 9, a month that could exceed January in bad news, 16,798 people were under some type of surveillance due to the pandemic while active cases experienced a slight decrease: 4,943.