Of the total number of cases, 1,000 infections are due to autochthonous transmission, 983 were contacts of confirmed cases, and 36 individuals acquired the infection abroad. 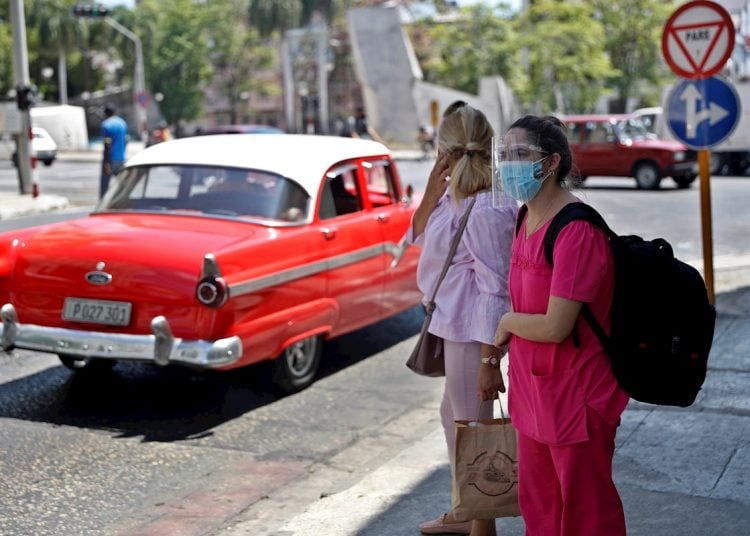 Two women wait for a taxi on a street in Havana. Photo: Yander Zamora/EFE.

The Ministry of Public Health (MINSAP) today reported 1,036 infections for this Friday from the SARS-CoV-2 virus in Cuba, as well as nine deaths and 118 patients in ICUs, where the situation continues to be “very complex,” according to Dr. Francisco Durán.

Until midnight, there were 22,398 hospitalizations due to the pandemic, of which 118 were in intensive care: 52 in critical condition and 66 in serious condition. The national director of Epidemiology stressed that among them there are four minors in critical condition, one of them is two months old.

The nine deceased due to COVID-19, seven men and two women between the ages of 54 and 87, resided in municipalities of Havana, Matanzas, Camagüey and Santiago de Cuba. With them, the death toll from the disease on the island now stands at 722.

Of the 1,036 cases, 1,000 infections are due to autochthonous transmission, 983 were contacts of confirmed cases, and 36 individuals acquired the infection abroad.

In this section, Cuban travelers had the highest incidence, mostly from Russia (31), although their countries of origin also correspond to Spain, Mexico and the United States.

Ten foreigners tested positive for the virus, six of them “imported” and four due to autochthonous transmission in Havana.

The capital reported the highest number of daily cases, 626, four imported. Santiago de Cuba and Artemisa, with 65 and 61 infections respectively, were the only territories with more than 50 cases in the last 24 hours.

On the contrary, below the 10 cases this day was only Ciego de Ávila, with four. The special municipality of Isla de la Juventud hasn’t reported coronavirus positive cases for 19 consecutive days.

The incidence rate in the last 15 days has decreased in Cuba, which now registers the statistic at 135.5 per 100,000 inhabitants. Havana, with twelve municipalities concentrating 40.3% of the transmission, leads in this, followed by Mayabeque and Matanzas.

The island’s 27 molecular biology laboratories processed 24,777 samples yesterday, according to the MINSAP; 41.9% of those diagnosed this day were asymptomatic.

There were 927 discharges, with whom 108,448 patients have already recovered in Cuba from the new coronavirus, which so far in May has already left 7,290 infections and 68 deaths, raising the rate for the month to 0.93%, the highest to date.