1,077 cases detected this Thursday, a day where four deaths were reported. There was another increase in the number of patients in the ICUs; as of midnight there were 83 patients in them. 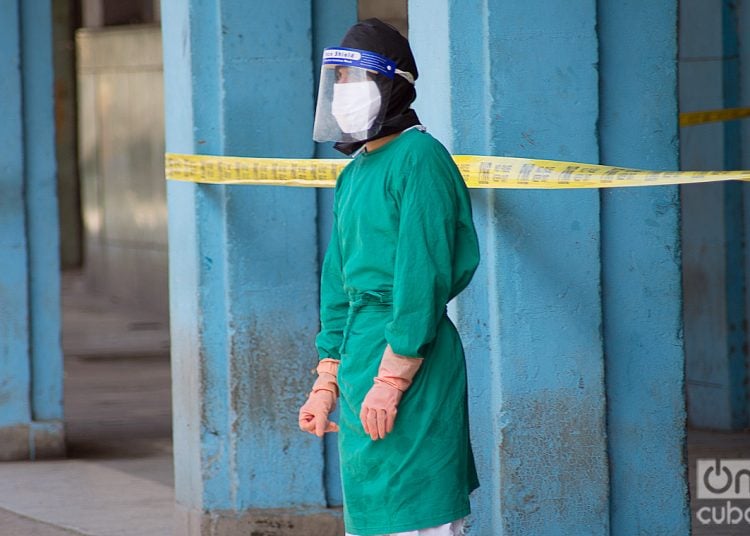 A health worker in an area isolated due to COVID-19 in Havana. Photo: Otmaro Rodríguez.

On the first day of April, the Cuban Ministry of Public Health (MINSAP) reported a new record of infections due to the SARS-CoV-2 virus, after identifying 1,077 positive cases among 20,749 samples processed.

Four deaths were also reported as a result of COVID-19. They are two women and two men, aged between 64 and 95, and they are from the provinces of Havana, Matanzas and Santiago de Cuba.

With Thursday’s deaths, the death toll from the pandemic on the island already stands at 429, more than a year after its confrontation. The fatality rate is 0.37%.

Most of the new cases are due to autochthonous transmission (1,067) and in 10 individuals the contagion occurred abroad. 1,030 were related to confirmed cases and in 37 the cause of the disease was not yet specified. Two foreigners were also diagnosed.

The number of cases increased in a great many of the provinces, although the highest figures were registered in Havana (516), Granma (116), Matanzas (98), Santiago de Cuba (72) and Sancti Spíritus (54).

The only territory that diagnosed less than ten infections was Holguín, with two cases. This territory also has the lowest incidence rate in the last two weeks (16 per 100,000 inhabitants).

Compared to the rest of the regions, Las Tunas did not report infections, despite having processed samples, as Dr. Francisco Durán stressed in his daily television appearance. The incidence rate in this province is 17.1 per 100,000 inhabitants.

In general, Havana, Granma and Santiago de Cuba continue to be the main territories in terms of incidence in the last two weeks, a period in which 11 Havana municipalities together with Bayamo (Granma) concentrate 50.6% of the transmissions.

Also notable among the day’s increases is that experienced in the ICUs, whose number of admissions rose yesterday to 83 (34 in critical condition and 49 in serious condition). On March 14, intensive care admissions rose to 87, setting a record for seriously ill patients as a result of this disease.

By age group, the statistics behaved in this way: 148 under 20 years of age, and among them 131 in pediatric ages; in addition, 11 were not yet one year old, seven were younger than seven months and there were two newborns, according to Dr. Durán.

47% of the cases on April 1 were asymptomatic.