After the landing of Air Force One, we saw a relaxed and smiling American president descend the steps, very different from the terrible enemy that should be expected. 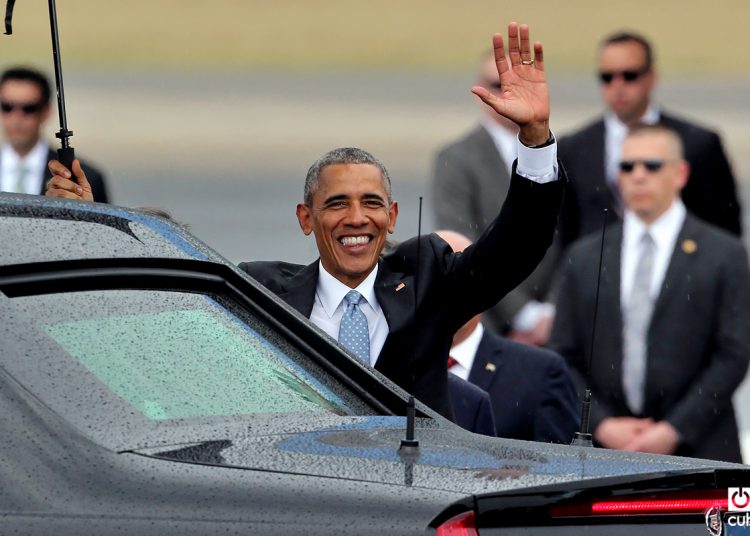 I was there that afternoon, more than five years ago. Under the rain. Waiting and waiting until, minutes after Air Force One landed, we saw a relaxed and smiling American president descend the steps, very different from the terrible enemy that should be expected after so many years of disputes between the U.S. and Cuba.

Barack Obama arrived in Cuba accompanied by his wife, daughters and his mother-in-law (an unusual custom), handing out handshakes, pats and smiles left and right. He looked happy. The mulatto who soon disappeared inside the Beast on his way to the heart of Havana seemed cool. 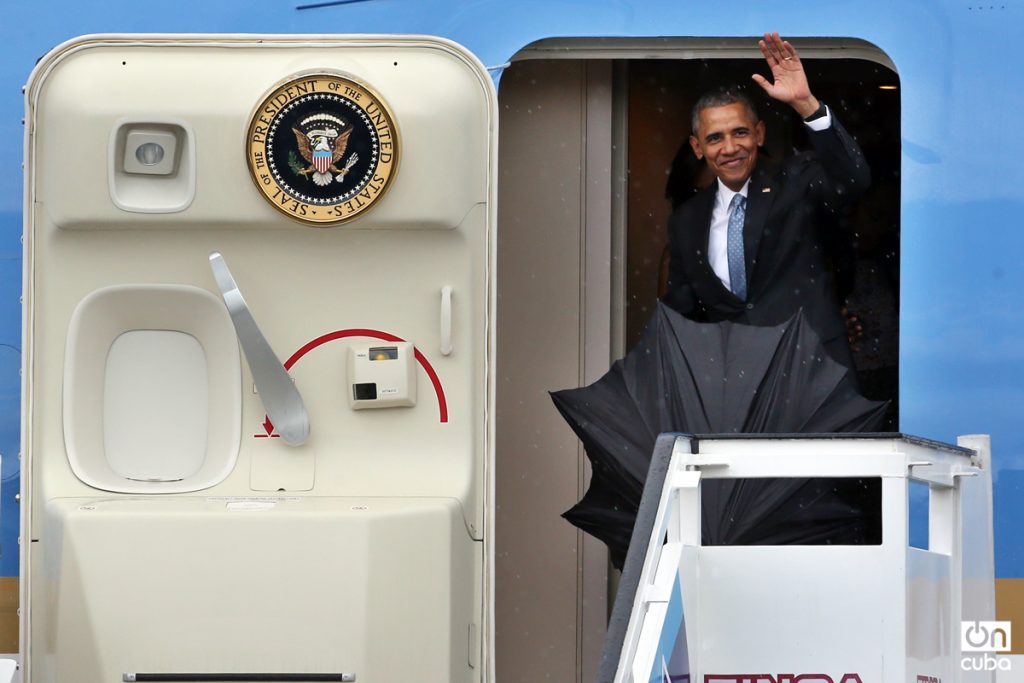 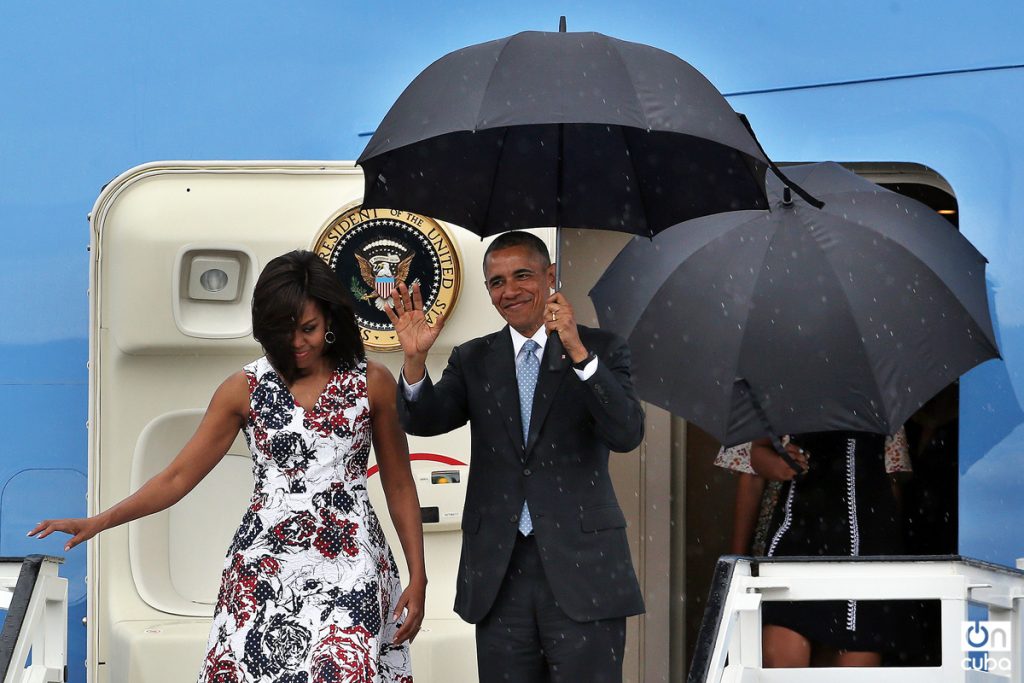 That was a historic visit, the whole island knew it, although a few did not like it very much. But those of us who were there, wet on the runway at José Martí airport, knew that we were privileged—most of us anonymous witnesses—of a visit that should be the culminating point in a process of rapprochement that had been brewing for a couple of years.

In my case, I was one of the photojournalists who covered the visit of the neighbor Obama. They were intense days, which began a month before when it was announced that a U.S. president would drop on the island, the first in 88 years. It was a month in which almost every day something was written on the subject and that information had to be illustrated, it was the month in which I took pictures of the most U.S. flags in the streets of Havana.

Flags of the “enemy” that had become fashionable and waved on almendrones (old American cars), pedicabs and balconies, or walked through the streets deformed by the anatomy—exuberant at times—of my compatriots. And the thing is that the people on the street were excited, hopeful with a change that should lead to normal bilateral relations, far from what we had experienced in so many years of the cold war and what we Cubans were already really tired of.

Thus, I was photographing flags and more flags, until March 20, 2016 arrived and with it, Obama. That day, after getting on his Beast, I didn’t see him anymore. My mission was summed up at the airport, upon arrival. Obama that night dined at a paladar in Centro Habana, privately. Before that, he had made a brief tour of Old Havana in which I, for reasons of time and logistics, could not be present.

Presidential journalistic coverage (of the first level, as they are called in Cuba) requires rigorous security protocols, which were extreme in the case of a U.S. president in Havana. We were only able to access the sites where Obama was by buses coordinated by the Cuban authorities, with prior technical review of our entire professional team.

Nothing special, they are normal things, security measures that are applied around the world with greater or lesser rigor, but that inevitably slow down work and generate endless hours of waiting before taking a photo.

Obama and Raúl Castro met on the second day, reviewed the troops, the visitor paid tribute to Martí with flowers and posed with the image of Che Guevara in the background.

4. Barack Obama in front of the monument to José Martí in the Plaza de la Revolución. Photo: Alejandro Ernesto (Archive).

5. That’s me running camera in hand next to President Obama.

Then they gave a press conference, together, joking, smiling, with the two flags in the middle.

I still had a hard time believing it as I photographed them, on top of a metal ladder carrying three cameras, five lenses (including a huge 400mm), a monopod, the laptop, a load of spare batteries and cards, and surely a few more things. And it is that photojournalists work like this, loaded like mules, always applying the old axiom that “it’s better to have more than to lack,” that it’s very sad not to capture an image because just that day you don’t have the correct lens, or for running out of batteries or memory cards.

On the third and last day of the visit, the press only had access to the baseball game and the farewell at the airport. I was in the “Latino” and I saw, from far away and through the bloody protective mesh, how Obama and Raúl talked and smiled all the time. They looked comfortable together. They weren’t there for the whole game and when they left the stadium, the visit ended for me.

By then was already watching the farewell in the press room of the Habana Libre Hotel, while I was editing and sending the last images I had taken that day.

There I was surprised by a huge and generalized laugh, followed by some very teasing comments, when Obama, climbing the plane’s steps, placed—very subtly—his hand near the buttocks of his wife Michelle, without touching her, but avoiding the wind from playing a trick on him at the end of his visit.

The friend Barack left and life took its course. Still for a few months, relations between our countries seemed to improve.

Things flowed, tourism increased, more cruise ships and planes arrived full of gringos and Cuban Americans who came loaded with dollars to spend on the thousands of businesses flourishing in Cubita “la bella.”

There was an atmosphere of prosperity.

But the man with the orange countenance won the elections and, once on his throne as president of the world, we all know what happened. The rope tightened again and, while those from the “North” pulled more to the right, here on the island we did it to our very peculiar left.

Things got screwed up again, cruise ships and tourists ended, many businesses closed, many others decided to go looking for luck in other parts of the world.

The rest of us stayed, most of us nostalgic for those brief days of bonanza heralding a future that could have been and was not.