Twenty-seven patients have been discharged on the island after getting over the coronavirus; 1,752 remain hospitalized. 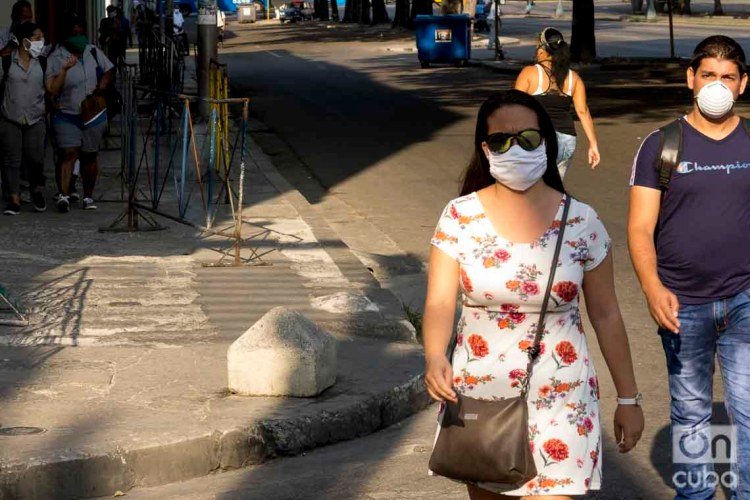 People with facemasks walking through the streets of Vedado, Havana. Photo: Otmaro Rodríguez.

The coronavirus statistics in Cuba are as follows: 46 cases of recent infections and 2 deaths. This is what was reported this Tuesday morning by the Ministry of Public Health (MINSAP) authorities at the press conference, which has already become regular since shortly before measures to contain the spread of the pandemic on the island intensified.

There are already a total of 11 dead and 396 infected cases, but the number of hospitalizations has again gone up, indicating a careful observation of the issue that can get out of control with the slightest carelessness.

Total hospitalizations are 1,752 patients; another 15,762 people are under primary healthcare surveillance in their homes.

The residence by provinces and municipalities of the new cases is as follows:

The two deceased included in the information also published on the MINSAP website are: a 101-year-old woman from Havana, a resident of the Playa municipality, contact of a confirmed case. She was admitted to the Salvador Allende Hospital and had inflammatory lesions in both lungs, elevated creatinine and light respiratory failure. She developed a “hemodynamically unstable upper digestive bleeding” and died at ten in the morning yesterday, this Monday.

About noon, the 68-year-old patient from Gibara, admitted to the Gustavo Aldereguía Lima General Hospital, in Gibara, also died. His diagnosis was “decompensated chronic obstructive pulmonary disease from a bronchopneumonia.” He was transferred to the Lucía Íñiguez Clinical Surgical Hospital, where he developed a “clinical, radiological and hemodynamically unstable deterioration.”

Asked by OnCuba about confirmed cases whose source of contagion is foreign travelers, which means they were not detected as positive with the possibility of asymptomatic disease, Dr. Francisco Durán, director of epidemiology of MINSAP, said that, in short, in relation to ties with foreigners, “sometimes their positivity is identified, at other times they leave before this, and at others it is not confirmed on the first occasions.”

“This is a disease that, as we always say, occurs with a group of people who have the virus who have no symptoms and who transmit the virus, which is what sometimes cannot be associated. But, unquestionably, the fact of a relationship with a foreigner who has arrived 14 days before the contagion was caused, from a country of high risk, is an epidemiological element of great value,” he said.

Of the 396 patients diagnosed with the disease until the closure of this information, 340 have a stable clinical evolution.

The MINSAP report explains that in the last few hours 1,556 cases were studied for COVID-19, and to date the country has made a total of 7,554 tests.

Measures announced for Havana against coronavirus