As a result, according to press reports, fines and prophylactic measures were applied, “official warnings” were issued and “four complaints were filed for the crime of Illegal Mineral Trafficking and another for the Improper Use of Natural Resources.” 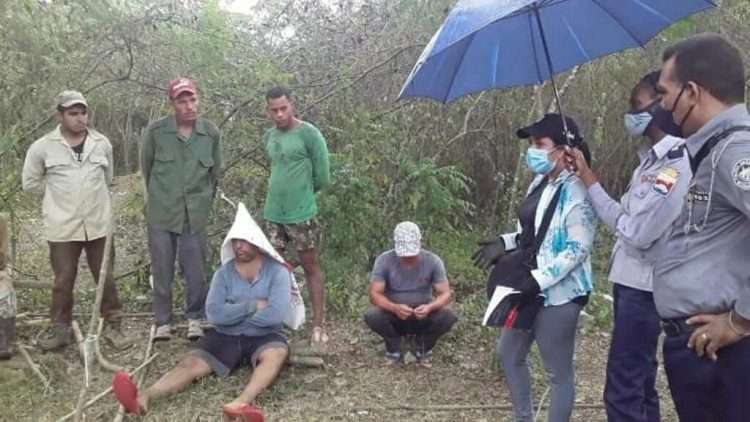 Authorities and agents of the Cuban police (right), together with practitioners of illegal gold mining in the province of Ciego de Ávila, central Cuba. Photo: Agencia Cubana de Noticias.

Some 300 people were detained in the province of Ciego de Ávila, in central Cuba, for activities related to illegal gold mining, according to official sources.

Joint forces of the Ministries of the Interior (MININT), of Agriculture (MINAG), of Energy and Mines (MINEM) and of the Office of Regulation and Environmental Security (ORSA) of that Cuban territory, “confronted” an illegal extraction “that involved about 300 individuals,” according to the Agencia Cubana de Noticias (ACN) news agency.

The report, which cites an informative note from the Forest Rangers Corps, points out that “the event took place on land belonging to the Basic Agroforestry Business Unit of the municipality of Baraguá, with the participation of residents of the place and in the provinces of Camagüey, Las Tunas and Holguín.”

In addition, it specifies that “in the place, rustic tents were detected and destroyed, where around 100 people stayed overnight; and deep excavations were observed” and that “testimonies of citizens detained red-handed revealed that the extracted stones were transferred to the territory of Camagüey, where they were sold at 1,000 pesos in national currency, considering that a gram of gold has a value of 2,500.”

“As a result of the confrontational actions,” the ACN assures that “four complaints were filed for the crime of Illegal Mineral Trafficking and another for the Improper Use of Natural Resources,” while “official warnings were made to 34 citizens linked to illegal the extraction.”

In addition, “90 fines were applied for violations of decree-laws,” as well as “prophylactic measures to 70 people from the provinces of Las Tunas and Camagüey.” Similarly, “50 sacks with 47.4 kilograms of mineral stone, two bicycles, an animal-drawn vehicle (with a horse included) and tools used for excavation and metal detection were seized.”

Finally, the press report recalls the existence on the island of a “government plan for the prevention and confrontation of events that affect natural resources,” which, it maintains, “is the result of a rigorous study of deficiencies in management” and based on which “the responsibility of the organizations responsible for the protection and sustainable use of the environment is consolidated.”

Although Cuba does not have large gold reserves, there are some small deposits in the country and illegal mining practices are also known to exist. It was recently announced that an important deposit located in the province of Camagüey is ready to begin a process of technical-economic feasibility study, a previous step to begin its exploitation.

Meanwhile, last October the Australian company Antilles Gold reported that it had found high concentrations of high quality gold and silver in an open pit mine, near the town of La Demajagua, in the special municipality located in the south of the island.