Cuba among countries with most COVID-19 tests per million inhabitants, according to health authorities

In total, more than 35,000 tests have been made per million inhabitants, between real-time PCR and rapid tests, in Cuba until July 1 to detect possible cases of coronavirus, Dr. Francisco Durán, national director epidemiology of the Ministry of Public Health, explained this Friday. 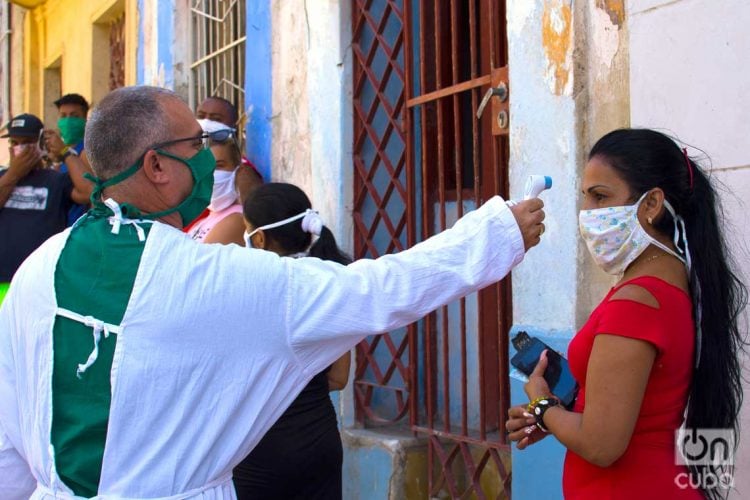 Taking the temperature before testing for COVID-19 in Los Sitios, in Havana. Photo: Otmaro Rodríguez

Cuba is one of the countries with the highest number of tests made per million inhabitants to detect COVID-19, according to the island’s health authorities.

In total, more than 35,000 tests have been made per million inhabitants, between real-time PCR and rapid tests, in Cuba until July 1 to detect possible cases of coronavirus, Dr. Francisco Durán, national director epidemiology of the Ministry of Public Health (MINSAP), explained this Friday, cited by the Agencia Cubana de Noticias (ACN) new agency.

In his usual morning press conference on the country’s epidemiological situation, Durán said that this number places Cuba among the 20 countries with the most diagnoses made, “despite not being among the most affected” by the SARS-CoV-2 virus.

The epidemiologist said that the figures for Cuba don’t appear officially on the world statistics site (Statista.com), but that “it could be placed on the table, with exactly 35,115 tests, between rapid tests and PCRs” per million persons. He said that according to that site, the United Kingdom leads that indicator with 138,860 diagnoses, followed by Russia, Qatar, Spain, the United States, Italy, Canada, Germany and China.

Meanwhile, among Latin American countries the list is led by Chile, with more than 58,000 tests, and Peru with about 51,000.

According to another international statistics site on the pandemic, Worldometers, Cuba’s number per million inhabitants this Friday afternoon was 19,489, in a list headed by Monaco, with more than 973,000, the Faeroe Islands, with more than 553,000, and Luxembourg, with more than 520,000. However, this site does not specify whether it only covers PCR tests or also includes rapid tests.

Faced by the population’s doubts about the differences and quality of both tests, Dr. Durán clarified that “the rapid test aims to detect in a community if the virus is circulating, while real-time PCR, a molecular biology test, is the confirmatory one,” according to the ACN, which, quoting the specialist, affirms that “the tracking of the contacts of the cases carried out in Cuba has reduced the incidence rate of confirmed positive cases.”

At the close of this Thursday, Cuba reported four new coronavirus positive cases, no deaths and 15 medical discharges. According to official statistics, 2,444 persons have been infected on the island, and 87 deaths and 2,300 recovered patients.

To date, more than 220,700 PCR tests have been performed, according to the MINSAP report, which doesn’t record the number of rapid tests.

People’s reaction to COVID-19 depends on origin and respect for authority, but also on ideology