About 40 convalescents between the ages of two and 18 are participating in the first part of the study, which will evaluate the safety of the Cuban drug developed by the Finlay Vaccine Institute (IFV). 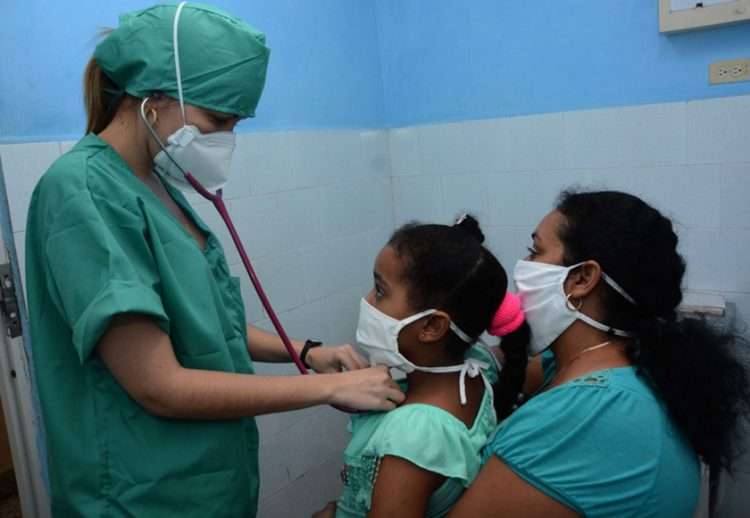 Care of COVID-19 convalescent children in the ER of the Paquito González Cueto University Pediatric Hospital, in the city of Cienfuegos. Photo: Modesto Guitiérrez/ACN/Archive.

The initial phase of clinical trials with the Soberana Plus vaccine in children and adolescents convalescing from COVID-19 began this Wednesday at the Juan Manuel Márquez Pediatric Hospital, in Havana.

About 40 convalescent patients between the ages of two and 18 are participating in the first part of the study, which will evaluate the safety of the Cuban drug developed by the Finlay Vaccine Institute (IFV), the Agencia Cubana de Noticias news agency reported.

Specialists from the Cuban Ministry of Public Health and the IFV explained that this clinical trial will lay the foundations to protect, from a possible reinfection with the SARS-CoV-2 coronavirus, those recovered from the disease in pediatric ages.

According to the source, it is “an open, adaptive phase I/II study to evaluate the safety, reactogenicity and immunogenicity of the formulation in this population group.”

The sample of volunteers in the trial, which does not include the use of placebo, is made up of 40 individuals, 20 children between 2 and 11 years of age and 20 between 12 and 18, also divided between symptomatic and asymptomatic of the disease. The former are also distributed among those who suffered mild, severe and critical symptoms.

The specialists assured that the research subjects will be followed up in the first 60 minutes after the injection, and after 24, 48 and 72 hours after receiving the immunogen.

Likewise, they explained that the evolution of children and adolescents will be evaluated on the seventh day after having been vaccinated and they will undergo random blood tests at 14 and 28 days.

If evidence of clinical safety is obtained, and depending on the approval of the Center for the State Control of Medicines, Equipment and Medical Devices (CECMED), the second phase of the clinical trial will begin with the inclusion of another 480 subjects, to complete the total of 520 children and adolescents foreseen in the study, to which will be added the Paquito González Cueto University Pediatric Hospital in Cienfuegos.

Similar to the first sample, that group will be divided equally, according to the ages and how they evolved after being infected with COVID-19.

Children and adolescents with two months or more recovered, who were diagnosed with COVID-19 by PCR test, will be able to participate in the study and those who have received any dose of vaccine candidates or vaccines against SARS-CoV-2, have presented signs of acute fever or infectious disease in the seven days prior to the administration of the vaccine or at the time of its application, or have treatment with antimicrobials or non-steroidal anti-inflammatory drugs.

According to the specialists, subjects with uncontrolled non-communicable chronic diseases, congenital or acquired immune system conditions, a history of neoplasia, abuse of toxic substances during the last 30 days or addictive disease to toxic substances may not be included either, except nicotine poisoning.

Other exclusion criteria are related to diminished mental faculties, severe allergies, participation in another clinical trial of preventive or therapeutic intervention in the last three months, the application of another vaccine, treatment with immunomodulators, blood transfusions or blood products, pregnancy, puerperium or breastfeeding or tattoos in the deltoid region of both arms.

The researchers expect to have the results of the clinical trial in mid-November and according to the efficacy of the drug, the Cuban regulatory authority could extend the authorization for the emergency use of the vaccine for the COVID-19 convalescent pediatric population.

At the end of September, CECMED approved said authorization for vaccination with Soberana Plus to COVID-19 convalescents of over 19 year olds.

The authorization of the drug developed by the Finlay Vaccine Institute allows the vaccination campaign to be extended to those recovered from the disease at these ages, after two months or more since they were discharged, details a note from the regulatory authority on the island.

Soberana Plus had been authorized for emergency use in the adult population since August, but only as a booster dose within a heterologous vaccination scheme preceded by two injections of Soberana 02.