Cuban minister: nobody can use “ruses” to raise prices

The Cuban minister of finance and prices said that the authorities will be "rigorous" with "those who try, through ruses, to evade and violate the new measures approved to avoid the increase in prices." 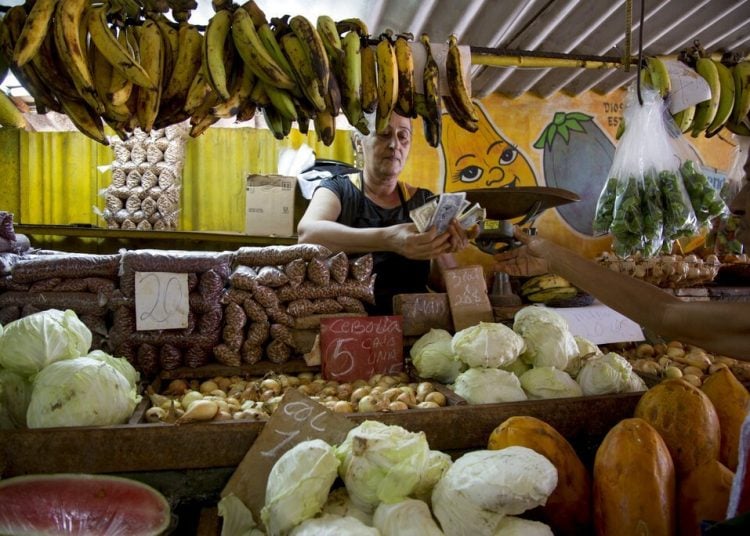 A saleswoman counts money after selling some vegetables to a customer at her stand in Havana. Photo: Ismael Francisco / AP / Archive.

Cuban Minister of Finance and Prices Meisi Bolaños said that both the state and private sectors must comply without “ruses” the provisions that limit the price of numerous products and services throughout the island.

“No economic actor can increase prices,” said Bolaños, who added that the authorities will be “rigorous” with “those who try, through ruses, to evade and violate the new measures approved to avoid the increase in prices.”

The minister’s statements to the press this Monday refer to the strategies implemented by several private establishments, in which some of the ceiling-priced products such as beer started being sold together with others such as cold cuts, fried tubers and croquettes―in the so-called “combos”―to increase their price.

Given this situation, Bolaños asked the population to “timely” denounce the place and the moment in which “abuse” with prices is committed. “For example,” she said, “where it is confirmed that the combo is a ruse to increase prices, the corresponding measures will be rigorously applied.”

The minister also said that contrary to “some malicious criteria,” the objective of the limits imposed “is not to curb the development of non-state forms” but “to avoid the increase in rates that do not correspond to an increase in costs, as well as regulate those already excessive prices.”

She explained that her ministry “is clear” that the work of the private sector is limited “by the non-generalization of the wholesale market,” but said that the price regulation applied to date has been carried out “on the basis of studies and reviewing performances, not only of costs and expenses, but of the inhabitants’ economic capacity, without ignoring the influence of the principle of supply and demand.”

As for the state sector, the minister specified that the products that make up the standardized family basket maintain the “centralized” prices thanks to the state subsidy, while others that are sold in a liberated manner such as oil, chicken and minced meat have “special regimes” updated since 2016.

She said that “although there is a group of products whose prices are high for the population’s level of purchasing power, most of them, fundamentally food products, are sold only at cost or with a commercial margin that does not exceed 1.30.”

In addition, she commented that if “there are products that exceed the commercial indices of the economic line” it is “because there are others that can replace them” and stressed the need to “maintain the production of goods and a stable supply” for price stability.

Bolaños said that to control compliance with the established limits, working groups have been created at the provincial and municipal levels, made up of representatives of different agencies and institutions responsible for making inspections “with sufficient ethics and decency” and investigating the population’s complaints, which since July 5 exceed 400.

Local authorities must adopt measures against offenders “within a period not exceeding one week,” said the minister, who said that work is underway on a mobile application “that will allow complaints to be made more expeditiously” and on “the creation of a price information system that will make it possible to know in real time the rates established for all goods and services.”

The limitation of prices for products and services is part of the recent economic measures, questioned by economists inside and outside the island, implemented by the Cuban government in conjunction with the increase in wages and pensions with the aim of avoiding inflation.

Recently, the Ministry of Finance and Prices issued a resolution published in the Official Gazette that establishes that self-employed workers, agricultural and non-agricultural cooperatives and other forms of non-state management, “cannot increase the current prices and rates of their products and services for state entities and the population.”

In this resolution, the presidents of the local governments are empowered to set the ceiling prices and rates for the private sector―which the authorities of several Cuban provinces have already done―and hold them accountable with the creation of the mechanisms of control, supervision and attention to complaints on the subject.

Cuba is currently going through a difficult economic situation due to its low production and high import accounts, especially for food and fuel, which is added to the crisis that Venezuela is going through, the island’s main ally and oil supplier, and the recent U.S. government measures that target key sectors such as tourism and investments.

Bill on unrestricted travel to Cuba: Building the “momentum”

Bill on unrestricted travel to Cuba: Building the "momentum"