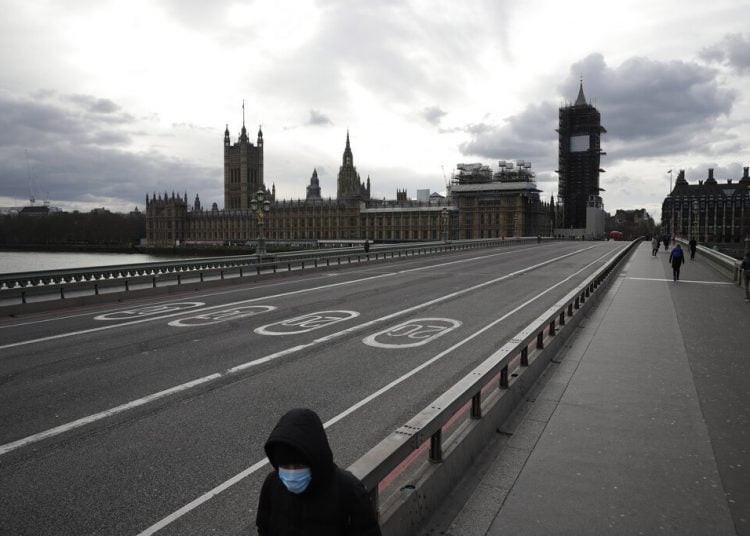 A person with a face mask walks across the nearly empty Westminster Bridge with Parliament in the background. London, Friday March 20, 2020. Photo: Matt Dunham/AP.

Cubans living in the United Kingdom raised more than 30,000 dollars to support the fight against the coronavirus epidemic on the island, according to an association that brings them together on the social media.

“The Association of Cubans in the UK thanks all the people and organizations that contributed to the collection of more than 25,000 pounds sterling to help patients with COVID-19 in Cuba,” the group reported on its Facebook profile.

About 26,000 pounds was collected, almost 31,500 dollars, according to a report by Prensa Latina (PL) news agency.

The campaign, an initiative of two Cuban doctors, started 28 days ago and its objective is “to acquire components of the artificial respirators that Cuba cannot buy due to the U.S. blockade,” says PL, which explains that among the donors were figures such as Lord David Triesman, co-president of the Cuba Initiative, dedicated to promoting trade between the United Kingdom and Cuba.

In this regard, Triesman commented that it is crazy that a people that contributes so much to world pharmaceutical and medical aid has to suffer from the shortage of equipment in these terrible times.

For her part, Daniesky Acosta, president of the Association of Cubans in the UK, told PL that this collection is not a gesture of charity but rather a reflection of solidarity towards the island, and that the money collected represents recognition of the Cuban health system and the work that Cuban doctors carry out against COVID-19 both in the Caribbean country and in other nations.

Acosta affirmed that now the association will look for a way that the inputs purchased with the collection can reach the island and not be affected by the U.S. embargo.

Since the pandemic began, Cuba has received several international donations, both from governments and international organizations, as well as from companies and groups of people related to the island.