At the closing session of the 9th Congress of the Union of Writers and Artists of Cuba (UNEAC), the Cuban leader considered it "unacceptable" that it not be understood that "all cultural institutions exist because of and for the creators and their work, not the other way around, and that bureaucratism and lack of professionalism stifle creation." 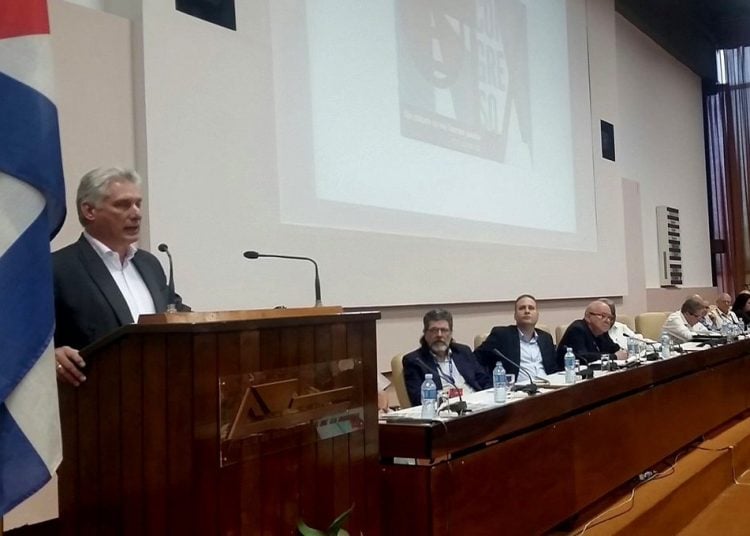 Cuban President Miguel Díaz-Canel speaking at the closing session of the 9th Congress of the Union of Writers and Artists of Cuba (UNEAC), on Sunday, June 30, 2019. Photo: @PresidenciaCuba / Twitter.

Díaz-Canel, who called himself “an enthusiast of art and culture in its most diverse expressions,” considered it “unacceptable” that it not be understood that “all cultural institutions exist because of and for the creators and their work, not the other way around, and that bureaucratism and lack of professionalism stifle creation.”

“There are plenty of dissatisfactions among artists and creators who must cope with everything to spread or promote their work, while those who have the responsibility to do so exercise a kind of parasitism based on inactivity,” said the president, who said that “it is an open secret that parasitism favors corruption.”

“Artists have the duty to pay their taxes, but should not have to pay enterprises if these have had nothing to do with work contracts, with their promotion or with their legal protection,” he affirmed.

He also urged the members of UNEAC to wage an “irreconcilable battle against ignorance and indecency,” and asked himself: “Why is it that from Cuba we haven’t been able to insert, disseminate, export the work of those who work in the country and instead we promote and we copy what the market has already coined and gives back to us wrapped in its rules?”

He said that UNEAC has to be “a kind of electron mobilizing forces and actions” for the international projection of the Cuban cultural industry, according to state media.

“It’s necessary to be authentic and stop selling canned shows, pseudo-cultural products that respond more to profitability than to pride in showing who we really are,” he said.

He also called for strengthening the island’s cultural policy and giving it “the content that current times are demanding,” and said there couldn’t be “a cultural policy for the state sector and another for the private sector.”

“In both sectors those who make true art have to be promoted, defended, given space,” he said, referring to the systematic criticism of Cuban artists and intellectuals about the artistic proposals that are promoted in many state and private facilities.

In his speech, Díaz-Canel referred on several occasions to Palabras a los intelectuales, as the 1961 speech in which Fidel Castro addressed a group of writers and artists is known, and which has pervaded through the phrase “within the Revolution, everything; against the Revolution, nothing,” which would define the country’s cultural policy.

The president called for being “attentive to those who push forward the market and not culture” and those who “benefit from the funds to destroy the Revolution.”

He explained that, although he was not “going to limit creation,” the Revolution is not going to leave “its institutional spaces in the hands of those who serve its enemy.”

“The limits begin where the symbols and the sacred values ​​of the homeland are disrespected,” he affirmed.

In addition, he called for assessing culture as a “fundamental link” in productive linkages linked to tourism, one of the island’s most important economic sectors.

“Cuba is a cultural power and today tourism, being as it is an economic activity that contributes to the budget on a daily basis, still contributes much less than it could if tourists went out to consume goods and services, not only cultural, but above all cultural.”

During the last day of the Congress, UNEAC’s leadership was presented. Luis Morlote s now its new president, replacing writer Miguel Barnet after eleven years at the head of the organization that groups together some 8,000 Cuban intellectuals and artists.

Until now Morlote was the first vice-president of UNEAC, he has a BA and has excelled in making radio and television programs specializing in the communication of cultural contents.

He presided until 2012 over the Hermanos Saíz Association, an organization of young writers, artists, intellectuals and cultural promoters on the island aged up to 35 years.

Havana’s Chinatown and the Shanghai Theater