The deputy prime minister and head of the island’s economy also assured in a press conference that the monetary reorganization process “has not been a failure” and said that despite the complex scenario that the island is going through, his government does not renounce an economic growth of around 6% in the current year. 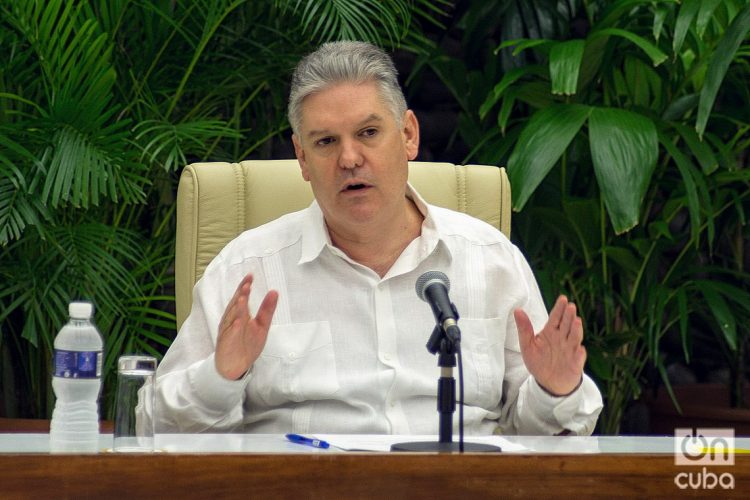 Cuba is prepared to “take advantage of any economic opening that may exist with the United States.” This was stated by Cuban Deputy Prime Minister and Minister of Economy Alejandro Gil Fernández this Thursday at a press conference.

“If that context occurs, we’ll take advantage of it,” said Gil Fernández, who, however, clarified that whether this happens does not depend on the Cuban government, but rather on Washington.

“The elimination of the blockade, of the measures imposed by Trump, would favor a more favorable scenario for Cuba and the United States, but it does not depend on us. What we demand is that all the absurd restrictions that weigh on our country and that deprive our people of a normal relationship with the U.S. people be lifted,” commented the deputy prime minister, who reaffirmed the possibilities of exchange between both nations.

“We have the possibility of exporting to the United States. The U.S. government is depriving its own citizens of Cuban products that are in high demand in the world, such as cigars and rum, and that we would be able to supply. And we are also able to acquire over there supplies and products for our economy. It would be a bilateral trade in favor of both peoples,” he pointed out.

However, Gil Fernández regretted that, even with the arrival of a new administration to the White House, “the blockade has not moved a millimeter” and all the restrictions and measures taken by the previous government remain in force, even during the COVID-19 pandemic, which he described as “cruel” and “inhuman.”

“Until now, in more than four months of 2021, we continue working without any modification of the blockade. Let’s hope it will not be like that in the future, but if it continues to be the case, we are also ready for that scenario,” he said, and added that in that case the Cuban economy “will continue to face this onslaught, always with a vision of social justice and attention to the most vulnerable. That spirit will not move one millimeter either in any of the scenarios that we have to face in the present or in the future.”

In addition, the Minister of Economy said that Cuba would continue “to resist, working for our development, exploiting all our reserves,” and that it would not give up economic growth “even when the blockade does not move.”

Even so, he insisted that this policy of economic siege—against which Cuba will again present next month a resolution in the UN General Assembly supported by the majority of the international community—“is the main obstacle to the development of the Cuban economy.”

He pointed out that the island “would be another” if it were not faced with “this criminal pressure” which, according to Havana, has caused an impact of more than 5.5 billion dollars in the last calculated year and 17 billion in the last four years, “an average of between 12 and 15 million dollars a day of economic impact through different channels,” among which he listed higher freight costs, prices, risk premiums, and the impossibility of importing products with more than 10% of an American component and of exporting to the United States, as well as the financial persecution and the determent of foreign capital investments.

“We have even had merchandise in ports and we have paid the suppliers, and after 15 or 20 days the banks returned the money to us, because it is from Cuba, and they do not want any problems,” exemplified the minister, who stressed that the island is not aspiring to anything other than “working under normal conditions, that our economy can perform as in almost the entire world.”

A complex scenario with growth forecasts

In addition to the impact of the U.S. blockade, Gil Fernández commented to the press about other peculiarities and tensions of the current economic scenario in Cuba, also marked by the pandemic, which has made it necessary, as he said, to allocate around two billion Cuban pesos from the State budget to support expenses related to it, and about 300 million for the acquisition of PCR tests and the operation of molecular biology laboratories.

In addition, he pointed out that COVID-19 has had a general negative impact on the island’s economic activity and production system, has forced the stoppage of factories and constructions, has affected food production and has also affected the deficit of supplies and the import of products, such as medicines. In particular, he highlighted the effects on the tourism sector—including the private businesses associated with it—, hit by border closures and travel restrictions around the world.

However, the deputy prime minister pointed out that despite this complex panorama, his government does not renounce the goal of economic growth of around 6% in the current year, although he said that this increase would occur based on last year’s drop, which was around 11%.

It would be “a growth that does not imply a considerable increase in the levels of activities and supplies because we would be below the level of economic activity of 2019,” specified Gil, who explained that with the 6% expected in 2021 and the same in 2022, by the end of next year Cuba would be recovering its 2019 GDP, some 56.9 billion pesos at constant prices.

To support this forecast, he referred to a favorable performance of exports, among which he mentioned nickel and telecommunications services, with dynamics higher than planned, and also to a partial recovery in tourism, even though so far the year it has not been able to reactivate as expected due to the pandemic. The forecast for this sector is between 2 and 2.2 million visitors in 2021, an undoubtedly ambitious goal taking into account the current context, but the minister of economy trusted that, even if these figures could not be reached, the country has other reserves and potentials to grow.

Among these, he mentioned the measures taken to promote the state enterprise—as a “fundamental actor of the Cuban economic model”—and its linkage with the non-state sector, as part of the current process of economic reforms and monetary reorganization underway on the island.

Gil Fernández recalled the package of measures approved by the government for the “strengthening” of the state enterprise, which seeks, he said, “greater management autonomy, which it be directed more and more by the director, with less intervention from the ministries,” and he affirmed that “entrepreneurs’ greater audacity in the search for solutions is beginning to be seen” as well as the promotion of an “export mentality.”

He pointed out that after the end of March, three months after the start of the so-called Task of Reorganization, some 500 state enterprises were still reporting losses, but more than 1,300 were already generating profits, and that the trend was positive in this direction.

Regarding the monetary reorganization itself, he defended the importance of its implementation, after which, he said, more than 150,000 people have joined the work force, and he asserted that this process “has not been a failure,” despite the criticism and concerns received. Gil assured that, contrary to what its critics maintain, problems such as the shortage of supply—and the consequent queues and the increase in prices in the informal market—the country is suffering would be present even if the reorganization had not been implemented, and pointed out as the main cause of these problems the impact of other factors such as the embargo and the pandemic.

Even so, he acknowledged that there have been internal deficiencies and difficulties in the design of this process, but specified that these have been rectified along the way “for the better,” based on the criteria of the producers and the population. In this sense, he referred to the recent measures taken by his government to boost agricultural production that seek, he said, to “eliminate obstacles” and “generate incentives” to increase the supply of food, which he recognized as the most complex challenge and urgent situation of the Cuban economy.

Finally, the deputy prime minister announced that in 2021 “concrete steps will be taken in the diversification of economic actors” on the island, “based on the progress we have made in creating the conditions.” In this regard, he asserted that Havana has not renounced the development of the private sector or its greater insertion in the island’s economy, including the expected approval of micro, small and medium-sized enterprises, of which, however, he commented would not be “a magic solution, but one more actor” of the economic fabric.

In addition, he reiterated that the government priority is to revitalize state-owned enterprises and create more favorable and coherent conditions for their take-off, competitiveness and productive links between them and also with the private sector, and he trusted that with the approved strategy this could be achieved without haste or improvisation.