Havana’s highest ranking authorities gave the news based on the forecasts of the mathematical models and the endorsement of the specialists, but asked the population for “responsible behavior” to be able to start the de-escalation, and “full respect for the rules and regulations implemented for the moment.” 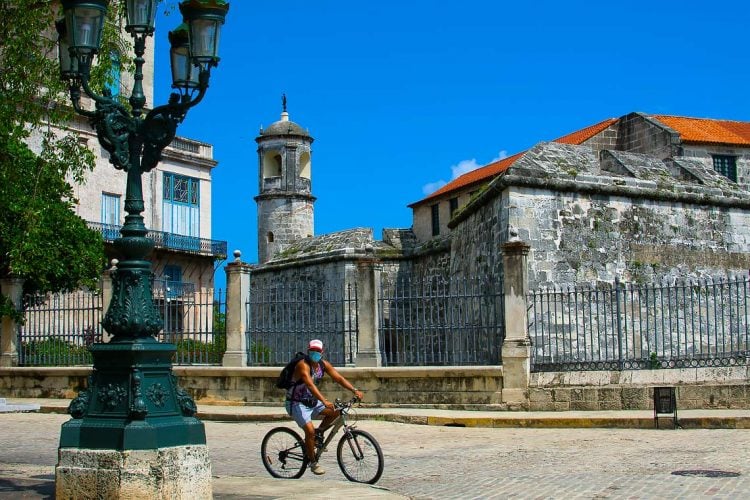 A cyclist using a facemask passes through the surrounding area of the Castillo de la Real Fuerza, in Old Havana, during the coronavirus pandemic. Photo: Otmaro Rodríguez.

Havana could begin the post-COVID-19 de-escalation and, with it, the gradual return to normality in the next 15 days, according to what was said this Monday at a meeting of the Provincial Defense Council of the Cuban capital.

The indicators that express the behavior and evolution of the disease in the city in the last few days “confirm a positive evolution of the epidemiological situation, which, if maintained, will lead to the province moving to phase one of the first stage in the next 15 days, as part of the program conceived for the return to normalization,” noted Tribuna de La Habana.

According to the publication, Havana’s highest ranking authorities gave the news based on the forecasts of the mathematical models and the endorsement of the specialists, but asked the population for “responsible behavior” to be able to start the de-escalation, and “full respect for the rules and regulations implemented for the moment.”

Luis Antonio Torres Iríbar, president of the Havana Council, affirmed that the capital cannot afford “the luxury of turning back,” at a time when the entire island, except for the capital and the province of Matanzas, started returning to normality, and he said that this “is only possible with objective perception of the risks, strict discipline and hermetic closure of all the gaps that allow SARS-CoV-2 to enter our body.”

Torres Iríbar urged Havana residents to “multiply rigor, put aside recklessness and become aware,” and affirmed that “even when the island’s health system has proven to be strong, dying from the disease is not very common and isolation is stressful, the risk still exists, and any oversight can reverse the results when the battle is practically being won.”

The official explained that in order to avoid a backward step in Havana, action would be taken “with all rigor against those who still resist using the facemask, violate physical distancing, in one way or another, or are irreverent toward any other measure called to cut the chain of transmission.”

Last Thursday June 18 Cuba began the first stage of its gradual reopening after almost three months of restrictions due to COVID-19, a return to normality in three phases that for the moment does not yet include the capital or its neighboring province of Matanzas, which have registered positive cases in the last two weeks.

Especially Havana, where around 2.2 of the 11.2 million inhabitants of the island live, concentrates most of the infections detected in the last 15 days, although in the last few days the daily figures have been the lowest since last March.

The first phase of the de-escalation in Cuba, which is already in force in 13 provinces and the special municipality of Isla de la Juventud, maintains several of the current restrictions such as the mandatory use of the facemask and physical distancing, but allows the reactivation of public transportation and private work.

Meanwhile, hospital services and some leisure centers such as museums, zoos and swimming pools are reopening with limited capacity. Access to the beaches will be allowed again, but under police surveillance at first, and tourism will open only for the national public until July 1, when foreign tourists will be able to vacation in the Cuban keys, although without access to the island.