The plant can guarantee, for the time being, about 70% of the fertilizers needed for the 2019 cold planting season. 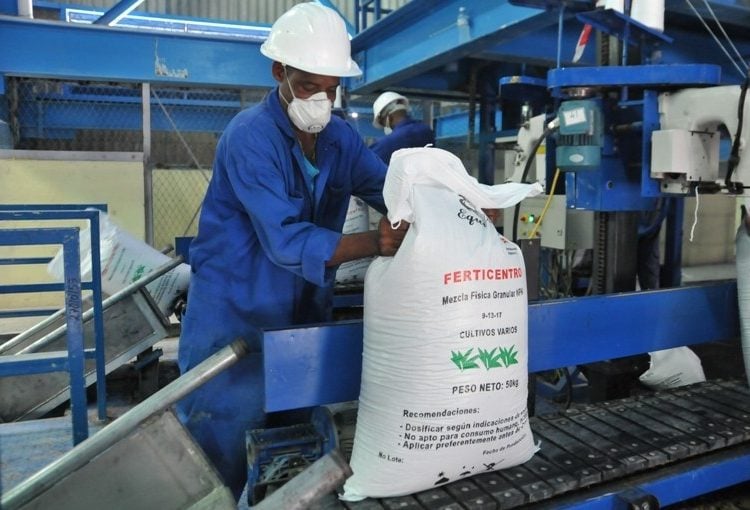 The largest fertilizer factory in Cuba, with the name of NPK Nitrogenized Fertilizer Factory (Nitrogen, Phosphorus and Potassium), the result of a Cuban-Indian investment made in the industrial area of ​​Cienfuegos, is already producing.

The industry, with capacity to produce 300,000 tons per year―with a production capacity of 55 tons of fertilizer per hour―plans to produce 79,300 tons in what remains of 2019, with which it must guarantee 70 percent of the fertilizer needed for the cold planting season, according to the daily Granma.

NPK’s production will reduce by about 25 percent the current import costs for substances such as ammonium sulfate, diammonium phosphate, phosphorus and potassium chloride.

The national industry contributes the zeolite―the complement for that mixed fertilizer―from the Ranchuelo and Villa Clara deposits.

The construction of the plant belonging to the chemical enterprise EQUIFA of the Ministry of Industries, was executed with the support of the engineering company AAR ESS EXIM, from India.

The investment that began in the beginning of 2017 has not ended, since a second stage is missing, which it will reach until 2020 and includes three large warehouses for raw materials, transportation vehicles and factory protection systems.

The total cost is 41 million dollars―or pesos, considering the parity of the official exchange rate―which includes about four million dollars contributed by an Indian loan for financing equipment and technologies. India is also participating in the project with technical advice and training.

The fertilizers will be applied in various crops such as vegetables, coffee, tobacco, cocoa, grains and pastures.

Initially, the first phase of the plant―called the minimum startup complex―should have been ready at the end of December, to start in January 2019, Cienfuegos’ daily 5 de septiembre reported in October 2018. No information has been provided about the delay in the startup.

Cuba and India have been strengthening their relations in recent times, boosted after President Ram Nath Kovind’s visit to the island in June 2018, when several cooperation agreements were signed.