The preliminary results of the third and final stage of testing of the Soberana 02 and Abdala vaccine candidates were released between Saturday and Monday, unleashing euphoria in Cuba, which has bet everything on its own vaccines by not entering the WHO’s COVAX mechanism or buying them on the international market. 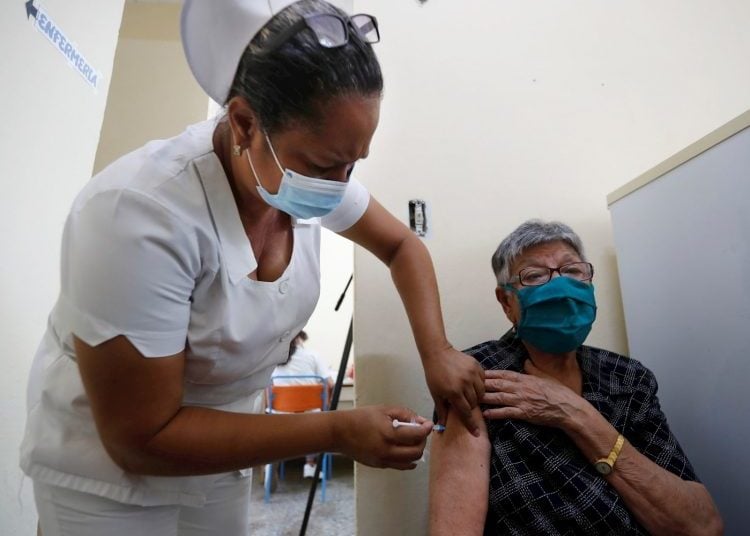 A nurse applies a dose of the Cuban COVID-19 vaccine to an elderly woman as part of a health intervention against the pandemic. Photo: Yander Zamora/Archive.

The efficacy achieved in clinical trials by two of the COVID-19 formulas that Cuba is investigating, 62% and 92%, brings closer the possibility that one of them will become the first vaccine of this type developed in Latin America.

The preliminary results of the third and final stage of testing of the Soberana 02 and Abdala vaccine candidates were released between Saturday and Monday, unleashing euphoria in Cuba, which has bet everything on its own vaccines by not entering the WHO’s COVAX mechanism or buying them on the international market.

The World Health Organization (WHO) establishes that for a vaccine candidate to be considered a vaccine, it must demonstrate an efficacy equal to or greater than 50%.

Soberana 02, from the Finlay Vaccine Institute (IFV), showed 62% efficacy with a two-dose scheme in a trial with 44,010 volunteers, while Abdala, from the Center for Genetic Engineering and Biotechnology (CIGB), was tested with a sample of 48,000 people in a three-dose scheme and reached an efficacy of 92.28%, according to data released by these institutions.

Both are subunit vaccines based on the receptor-binding domain (RBD) of the S protein of the virus, although in the case of Soberana 02 this element binds to the inactivated tetanus virus to enhance the body’s immune response.

“The efficacy of Abdala for symptomatic cases is an impressive index that is positioned at levels similar to those obtained with vaccines that use novel technologies such as messenger RNA or adenoviral vectors,” affirmed Cuban molecular biologist and researcher at the University of the State of Sao Paulo (UNESP) Amilcar Pérez Riverol.

The scientist, a former CIGB researcher, highlighted that the formulas “have already proven to be effective in reducing cases, hospitalizations and deaths” and added that the results obtained by Soberana 02 with two doses are a good indicator that suggests that with the application of a third dose of Soberana Plus — another of the Cuban candidates under investigation — “should increase to rates close to or even higher than 80%.”

The scientific institutions responsible for the preparations have announced that they will shortly request authorization for emergency use from the Cuban regulatory body, the Center for State Control of Medicines, Medical Equipment and Devices (CECMED).

Both formulas are already being administered to tens of thousands of Cubans as health interventions, in parallel to clinical trials, as a strategy to stop infections on the island, which is going through the third and worst wave of the pandemic.

Once the green light from CECMED has been obtained, the process to obtain the international validation of the two Cuban vaccines would begin.

“Almost all the other vaccines already approved produced a well-detailed press dossier of the interim phase 3 analysis that led to the efficacy announcement. This would be highly recommended as it would not be necessary to wait for the time required for publication in peer-reviewed scientific journals, which usually takes longer,” the expert considered.

He also recalled that “the publication in this type of journals on the Phase 1/2 results” is pending and warned that “it is vital that there begin to be reviewable data” in this type of platform. Then, “in a less immediate but very important period, there would be the sending of the files to obtain the certification of the World Health Organization (WHO),” explained Pérez Riverol.

Although these steps are not essential for the use of Cuban vaccines on the island, they would contribute to clearing up the doubts of groups critical of the Cuban government who question the veracity of these results, especially given the serious crisis that the country is going through.

That situation has resulted in a galloping shortage of basic products, including medicines, which has led many to wonder how it is possible for Cuba to develop vaccines when antibiotics and even aspirin are lacking.

“The lack of basic medicines is regrettable because, like COVID-19, it has a profound impact on people’s health. But synthesizing an antibiotic and making a vaccine are different processes,” said the scientist.

Pérez Riverol recalled that Cuba has a history of “more than 35 years of investment in human capital, experience in working with vaccines and investment in infrastructure for research, development and production of vaccines and equipment associated with this type of technology.”

“That is what has made it possible that when the pandemic arrived, Cuba was in perfect condition to develop a COVID vaccine” without having to make a large investment or divert resources from other imports, he added.

Another “crucial” element, according to the expert, is that due to state centralization there is a “very strong intercommunication between all the institutions that can contribute to obtaining this result,” and at the same time between these and the Ministry of Public Health. “Without that, clinical trials would not have been possible so quickly, and without clinical trials you have nothing,” he added.

These results also open the door to potential exports of Soberana 02 and Abdala, in which countries such as Argentina and Venezuela have already shown interest, in addition to the recent announcement by Iran that this week it would approve the emergency use of the former.