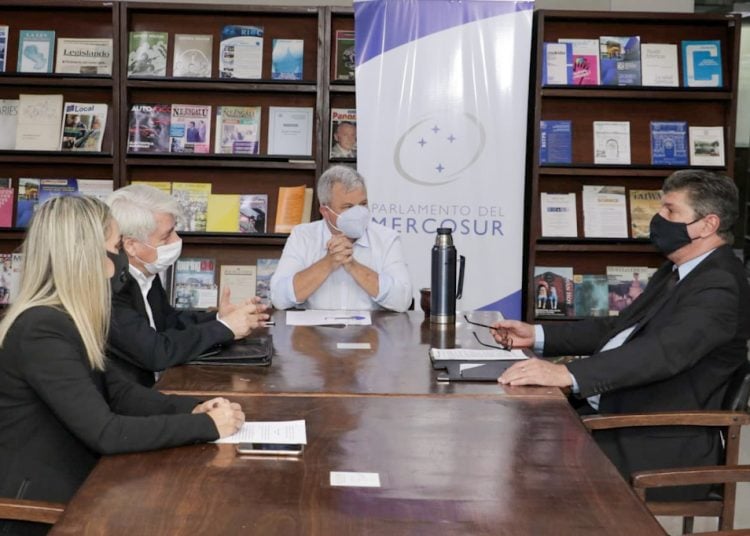 Meeting of the Paraguayan delegation to PARLASUR with the Cuban ambassador in Asunción. Photo: @PyParlasur/Twitter.

The Paraguayan delegation in the Mercosur Parliament (PARLASUR) met this Friday with the Cuban ambassador to Paraguay, Raúl Gortázar, to continue advancing in cooperation between the two countries, as well as with the rest of the countries of the South American bloc, also made up of Argentina, Brazil and Uruguay.

Ricardo Canese, from the leftist opposition group Frente Guasu, reported that it was a “very profitable and very satisfactory” meeting, from which they hope to obtain results “as soon as possible.”

In addition to Canese and Gortázar, the others at the meeting were the vice president of the Paraguayan delegation, Manuel Morínigo, from the opposition Liberal Party (PLRA), and María Eugenia Crichigno, from the ruling Colorado Party.

In recent weeks, both the Paraguayan Executive and the Legislature began contacting the Cuban authorities, with the intention of being able to access the vaccines developed on the island, once they pass the trial phases and obtain the corresponding authorization.

Cuba is developing five vaccine candidates against the coronavirus, of which Soberana 02 and Abdala are in the third and final phase of clinical trials to evaluate their efficacy.

Given Cuba’s advances and Paraguay’s difficulties in obtaining vaccines against the coronavirus, Canese defended a “strategic alliance” between the two countries, without ruling out that it would be extended to the rest of Mercosur.

“Paraguay has more strength in terms of food production; Cuba, in the medical area. There may be cooperation, this issue of the COVID is going to last a long time,” said the Paraguayan member of PARLASUR.

Canese affirmed that they are urging the Paraguayan government and also the rest of the Mercosur countries, through PARLASUR, to “discuss and analyze a strategic alliance” with Cuba that allows “to better face this COVID pandemic.”

This week, during a meeting with representatives of the Paraguayan Legislative Power, the Cuban ambassador declared that his country is willing to “support Paraguay in whatever way is necessary” and highlighted the “excellent results” that Cuban vaccines are having.

Paraguayan President Mario Abdo Benítez said this week that “nothing is ruled out,” when asked about a possible purchase of Cuban vaccines if they get official approval.

According to data from Paraguay’s Ministry of Health, is 87,615 people have been vaccinated.