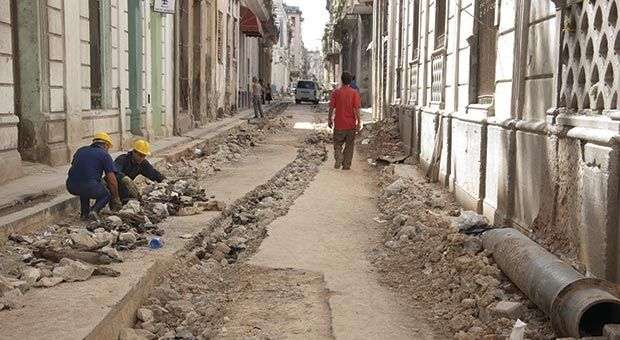 Utility networks infrastructure (energy, water, and telecommunications) are key to the urban, architectural, social, and economic development of the island and any modern society. In the Habana Vieja historical district, a laboratory of positive experiences that are making the leap or attempting to provide one for the rest of the city, these installations are being successfully rehabilitated.

“It is necessary and extremely important work. It could not have been done at any other time; it is being done now with admirable coordination between different state agencies, including those that supply electricity, gas, water, fiber optic, and telephone services…in sites that have been completed.”

A March 2011 study conducted by a group of professionals associated with Florida International University (FIU), including architect Nicolás Quintana, found the following:

A restoration and construction deficit for new projects in 421,000 homes in the city of Havana, and 1.6 million housing units nationwide.

Drinking water and sewage systems will need investments of $3.2 billion and $2 billion dollars, respectively (without including operations and maintenance). Most of those costs are due to the need to repair and update distribution networks and also to the deterioration of sewage drainage channels.

The electric power system will require an investment of $4.2 billion to increase the generating capacity of the country’s seven largest thermoelectric plants to the system’s designed capacity.

The most recent development in the nation’s telecommunications system is based on the installation of a new fiber optic cable between Cuba and Venezuela, which will provide the capacity for significantly increasing connectivity.

According to this study, it is estimated that solely in terms of technical networks infrastructure, $10 billion will be needed. Another $23 billion is needed for developing transport infrastructure.

In our opinion, it is essential at this time in Cuba to be able to expand the creation of PPP (public private partnership) businesses, which would signify taking a step toward creating a technologically modern society.

In some types of PPPs, investment is effected by the private sector based on a contract with the State to provide certain services. The state contribution can be in assets, especially the transfer of public assets or elements of infrastructure for their administration, operation, maintenance and etcetera. There are several formulas that can be used in the current context and under current law. Foreign companies that are interested in investing, with a commitment to developing their lines of business in the medium to long terms, would be willing to sit at the table if they perceive opportunities for both sides. The most recent example is the Mariel project, although that particular development is much more than a PPP cooperation project.

Cuba is in a difficult situation with regard to its infrastructure; this is mainly due to a lack of maintenance and modernization, and the country is seeking a dignified solution to this problem. That solution, unquestionably, lies in the arena of politics and strategies that are decided on the administrative level in the short term, because with every day, hour and minute that goes by, the cost rises for total recovery and its social and economic consequences.

The Right Woman in the Havana's 15th International Theatre Festival