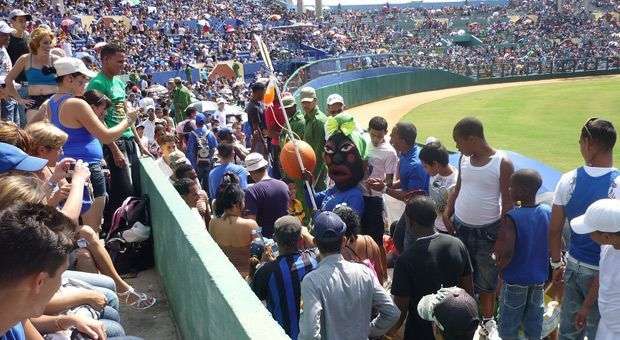 Just a few hours remain to the start of the 53 National Baseball Series and logically the news regarding it follows one after another. This Thursday, the Strike Zone blog revealed new designs of the logos for 10 teams that will see action from November 3.

The announced changes are part of a valid attempt to improve the image of the uniforms the players will wear this season. At last… many of us would say, especially to know that we will not deal with dark pants and crazy and disjointed color combinations, in relation to the minimum requirements to enjoy quality television broadcasts. Thus, the sets will look gray pants and one color jerseys when they are on the road, while, acting as a home club, they will wear full white.

Back to the emblems and in my modest appreciation, Pinar and Santiago did not have significant changes in their proposals. In the case of the eastern team they incorporate a stinger at the end of the letter S that identifies them. Apparently those responsible for the overall design of Artemisa decided not to get very complicated, and presented a fairly simple logo, which currently does not reveal any association with pets, territorial symbols or popular nicknames.

Camagüey maintains its attachment to the tinajón (big pot made of clay that characterizes that province), offering one of the most accomplished models. It Las Tunas neighbors, honoring the nickname of lumberjacks , put an ax in his new badge , but in this case I do not find very convincing green and red colors that distinguish it . At the eastern end Guantanamo bet claimed an essential component of their identity: an Indian who apparently is willing to do battle in the race to come. Moreover, the Gourriel family, now with the Giralda as an emblem, cannot show on the left sleeve of their shirts the Santi Spiritus rooster.

Two teams whose fans I suppose are very happy are Cienfuegos and the Isla de la Juventud (Isle of Youth).  Luckily the laughable shrimp evaporates from the uniform of the team led by Iday Abreu , the presence of seafood made ​​me think of a subliminal advertising on the export status of the province. Instead, the elephant reappears, marked by the strife of the past in our professional baseball. In relation to the Isle of Youth, it appears that the contention between sharks and pirates was won by the latter. It would be good to know if the final decision was of its inhabitants or responded to one of the many indications that daily come “from above “.

Consciously I left for last the new logo that identifies Ciego de Avila. The reason: at least in social media is the most controversial and comments against. An initial glance reveals the queen of the fields in Cuba: pineapple, a second look too, and at least to me, a third look tells me the same. Only by reading one of the reviews I could perceive that virtually fruit crest resembles the claws of a tiger … is it so?

It remains for me to present the images of the ten emblems and you are the one to continue the discussion, here we go:

The Right Woman in the Havana's 15th International Theatre Festival