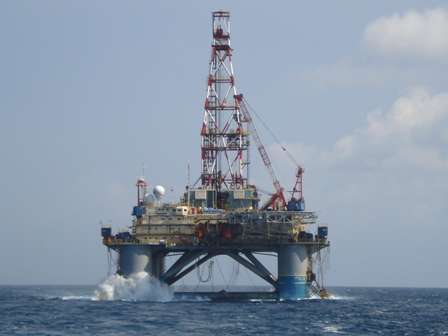 The country’s new attempt to find the precious hydrocarbon is underway on the northern shores in the center of the island. There the Songa Mercur semisubmersible will drill the deepest well in the national history (4 miles).

Cubapetroleo explained that the platform has all the means to ensure that work is carried out safely and effectively. They also carried out any inspections necessary to prevent environmental damage…

The platform owned by the Norwegian company Songa Offshore and operations, conducted as part of an exploration venture with Russian oil Zarubezhneft should take some six months.

The cost of the proposed exploratory drilling of L-01X will is of 126 million dollars.

Cuban and Russian oil companies signed four contracts in November 2011 to search for oil. According to the documents, Russia has the right to participate in the exploration and extraction of oil in blocks L, III, 9 and 12 of the Cuban area.

Zarubezhneft also plans to conduct work exploitation of the Cuban Jaruco Boca field, which will start drilling the first wells in the spring of this year.

With the work of L-01X is a continuation of the campaign of offshore exploration drilling in Cuba, which has so far not borne fruit.

The first search, led by oil company Repsol, only resulted in a dry hole. While, in a joint effort, the companies Gazprom Neft, Russia and Gulf Pc, Malaysia found what they wanted, but not in significant amounts and conditions for a commercial well.

Petroleos de Venezuela, which organized the perforations at Cape San Antonio, also failed in his attempt. The Scarabeo-9 platform, which can drill in water depths up to 12,000 feet, withdrew from the island without having achieved satisfactory results.

Experts believe that the existence of oil in the hundred thousand square kilometers of the Cuban Exclusive Economic Zone is guaranteed. But the odds of finding a positive well are one out of five or six that are drilled.

With the new well they will be able to discover the potential of oil and gas that the country has in that area. In less than a year we will know if the block L of the Cuban platform has something to offer.

Leo’s world in his songs