I don’t know if at the top of Maisí, or in his native Baracoa, they know that it is an act of rampant censorship, and a rotund stupidity of the decision makers in “the ideological sphere.” 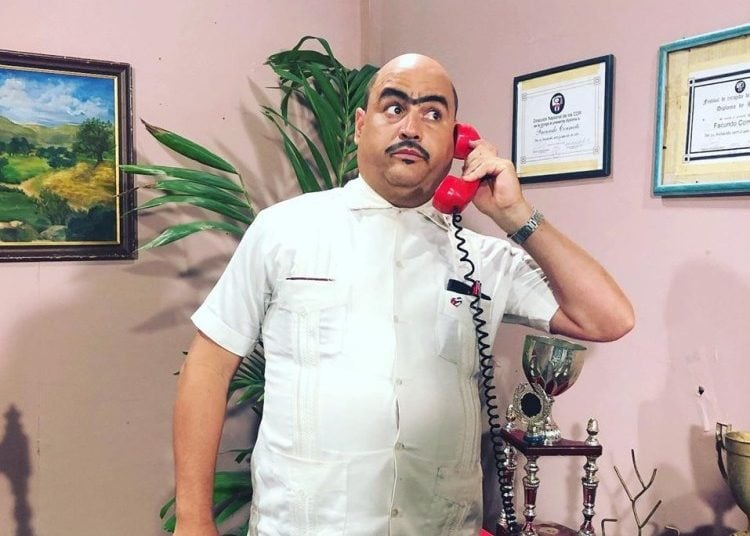 We are experiencing a kind of mourning, mixed with irritation, disappointment, uncertainty, because of the very summary suspension of actor Andy Vázquez of the “Vivir del Cuento” TV program, and the disappearance with him of one of the most beloved characters he embodied, Facundo Correcto.

I don’t know if at the top of Maisí, or in his native Baracoa, they know that it is an act of rampant censorship, and a rotund stupidity of the decision makers in “the ideological sphere.” But in Havana, Miami and Facebook, those three Cuban cities where some of our daily anxieties are resolved, the news has been going around, suspecting that the reasons given to justify such a decision are only pretexts that don’t convince many.

The director of the Cubavisión Channel, Rafael Pérez Insúa, spoke through an “informal” interview (with a “jeez, that’s great!” included) on a YouTube channel―Cuba en Directo―that coincidentally started publishing last December 31 four fragments of an interview without rhyme or reason that don’t reach the 300 visits. As one friend described it, “that invented page” was used to try to especially silence those who are following this debate through the social networks.

Why was this clarification not transmitted through the channel he directs, if the you-know-what program is from Cubavisión and the viewers on the island expect it Monday after Monday? The answer is obvious. The “ideologues” once again intend to operate with two parallel countries, as if they existed: one that receives little information, almost none, controlled from the traditional media and supposedly inhabited by unconditional people; and the other, the one they think is mostly outside of Cuba, who access the Internet without limits and that they seem to perceive as mostly against the government, so it deserves this type of “false information.” A mistake.

Many people have even been more outraged by the director of the channel’s silence and half-words. It’s hard to make do with these words from Pérez Insúa: “Andy is not sanctioned. Not at all.” He then gave one of the most bizarre arguments he could have chosen to justify the sanction: “What Andy did was use the program and the character which he plays based on personal criteria and that led to making a decision [typical amphibology] on his participation in the season that is now being recorded.”

That is, that Facundo was not Andy’s, and therefore the actor had to be careful about the issues Facundo was going to talk about. It is a bit unusual to pretend that Facundo was not the bearer of the “personal criteria” of the actor who embodies it. Can’t Andy Vázquez be his own scriptwriter? Did he sign a contract of muteness or exclusivity of thought with Cuban Television? Of course he didn’t, and neither did Pánfilo.

All the characters of “Vivir del Cuento” have been doing an overwhelming amount of sketches of the Cuban Television program for years, in Havana as well as in Miami, in theaters as well as in cabarets, in work centers, in a Hialeah store, or in the Focsa stores; making fun of everything and everyone, either using the popularity of their characters to talk with Cubans about issues that don’t fit in a weekly program, nor in the story of old Pánfilo and his neighbors in the barrio. Among all the actors they also advertise for Cuban brands inside and outside of Cuba. But that, apparently, hasn’t been the cause of the departure of one of its four main characters.

Others have been more honest when recognizing in their Facebook accounts and unofficially that the straw that broke the camel’s back for those who executed the censorship was a video of Facundo on YouTube satirizing the opening of the Cuatro Caminos market. And that despite the fact that Facundo, surely being cautious, dealt very mildly about the mob and the destruction that occurred there. (By the way, it is not known that any of those who could not foresee what would happen there were sanctioned, those who did not do what was necessary to avoid it, or those who planned that opening so badly.)

And why do censors get so sensitive with a video that anyone could consider as a second division joke? In those days, what happened in Cuatro Caminos was driving them crazy and they immediately used the media to blame the heartless, ungrateful people. Now they react by proclaiming the topic closed, untouchable, sacred. Apparently a shy mockery about what happened there, which really deserves much more than a moralizing discourse, can’t be allowed. But you’ll know them for their noes.

In August 2019 an article published in Granma put on the table the real causes for which Facundo is no longer in “Vivir del Cuento.” It said: “The official character, the political cadre, the simple barrio leader, the one who once directed and no longer does, and even the members of law and order institutions, have become a favorite target at the time of putting together the most ridiculous characters or those who assume negative roles in not a few audiovisual productions (humorous or not) of recent times.”

And the article’s author warned: “I don’t think it appropriate to always pigeonhole the figure of the official authority in the so-called negative roles, because art moves and enthrones stereotypes and in the long term people will end up associating these authorities, without exceptions, with botching and even with failure.”

You didn’t have to be a fortune teller to perceive that the sighthounds had gone hunting. The “cadres” could no longer be wounded, ridiculed.

But the scriptwriters of the program have given an extremely interesting answer to the amputation. Facundo disappeared from the most recent chapter entitled nothing more and nothing less than “The barrio, the party and the new man,” but an even more adverse character entered the scene, I would say truly sinister.

On December 30, Cuban Television broadcast this latest installment, of an in-depth symbolism and with an even more abrasive ability to criticize than everything we have seen before.

“Comrade La Llave,” that ambitious and corrupt inspector incarnated by the excellent actor Miguel Moreno Rodríguez, is a shy copy of a bureaucrat compared to the transmuted “Felipe Recio,” the new President of the Council of Neighbors that replaces Facundo and was imposed from “above.”

In the first chapter he appeared not only as an opportunist, skilled in the use of stereotyped and empty language, a sculptor of his own ego (I can’t help remembering Lindoro Incapaz) but, and above all, as a manipulator, capable of blackmailing and ill-treating others to achieve his own unscrupulous success.

A grumbler, irascible, persecutor, in this first chapter he violated a golden rule: he showed that he doesn’t even respect Pánfilo, old, grumpy, but kind, fair and a friend of his friends. The suspicions of the old man could not withstand the terrible thrust of this character, which, by the way, is full of reality.

Just because it was the last chapter of the year and that it had to end with the Guaracheros de Regla street dance group’s singing and the half-teasing party that Felipe Recio imposed, the new President of the Neighbors Council didn’t earn a good thump this time. But it must be said that he is a bad person and if he continues like this he won’t reach his goal.

Throughout the chapter Pánfilo asked several times and asked himself, “And where’s Facundo?” It was a sorry sight. He got many answers, each one in an emptier and authoritarian way:

“He is indisposed and will not be able to continue in charge.”

“Enough, stop being so irresponsible” [with so many questions].

“He’s not going to be here and that’s it, that’s the end of the story.”

And therein lies the key to what has happened and what is coming. The closing of the issue and the commitment to oblivion. In a few weeks everything will have passed. We will get used to the sadism of Felipe Recio and the absence of Facundo. If we have enough time, we will remember him with nostalgia. He who was a true friend of Pánfilo, who respected him and loved him even if he acted as a squared square. That’s why people loved him too, and they never saw him as a “SOB.”

The Facundo Correcto we’ve known, without Pánfilo at his side, does not survive; he is one of his alters. Andy Vázquez without Cuba will have to, without backing up in the face of discouragement and probably resentment, reinvent himself. This, if in the end his decision, very personal and unquestionable, was to stop living on the island, where, no matter what they say, no matter the promises they make, he would have difficulties of all kinds to continue working.

It is unlikely that Facundo will be restored, that the error will be amended, although the script, actually, would allow it. It would be a miracle that cannot be expected, but I’m waiting for it. Let’s censorship not rear its ugly head again, for the umpteenth time.

Don't count on me to hate because I have two homelands