ES / EN
ADVERTISEMENT
Home Opinion Columns It is not easy

Until Biden establishes and implements his own vision, he is simply continuing to promote a world-order defined by Trump. 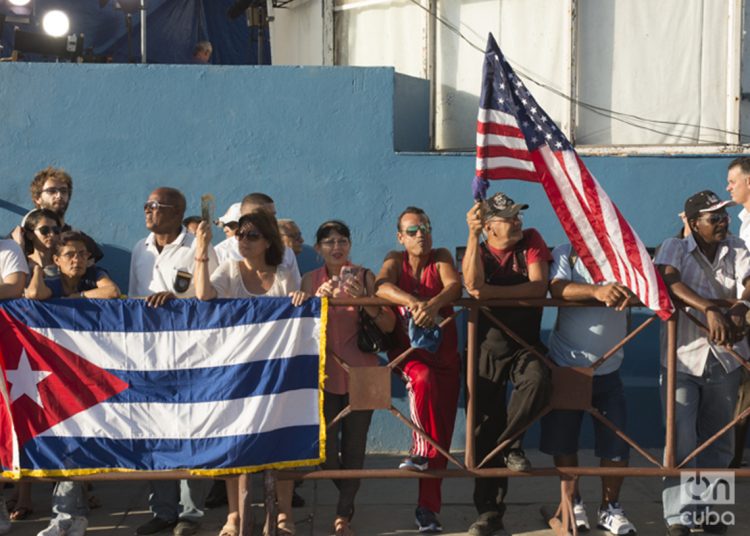 During the official opening of the U.S. Embassy in Havana, August 14, 2015. Photo: Alain L. Gutiérrez (archive).

Last month, just as my last column hit the pixels of OnCuba News, the Miami Herald published the results of new Bendixen/Amandi poll showing that Cuban American voters in Florida are still crazy in love with Trump and his isolationist policies towards Cuba. I do not think that this surprised anyone. The national despojo of the Trump specter has just begun and Cuban Americans are not immune from its legacy.

The one bit of data that did surprise, that 45% of Cuban Americans have a favorable view of the Biden/Harris administration, did not receive much attention. That is ten percentage points over the number of respondents who reported voting for the Democratic ticket. Biden might be convincing some skeptics.

The bulk of the coverage of the poll focused on the results highlighting the continued intransigence of Cuban Americans when it comes to U.S./Cuba policy.  Sixty six percent of those polled supported the embargo and a similar proportion opposed the return to the era of normalization initiated by President Obama. Ignoring for a moment the intriguing decision by the pollsters to include the name of the former president in a question supposedly designed to measure policy opinions (just hearing Obama’s name elicits hormonal reactions in some quarters, after all) it is clear that the community has not changed its perspectives since the 2020 FIU Cuba Poll captured many of the same sentiments just before the elections.

Spoiler alert: I am not going to offer any good answers to these questions. The point of this text is to argue that the Biden/Harris administration should not limply accept the views of a community so mindlessly stuck in an ineffective “group think” loop as a guide to establishing foreign policy for the country. I am humbly encouraging President Biden to let science guide his decision-making process on the future of US/Cuba relations.

As Mark Twain apocryphally said, “History never repeats itself, but it often rhymes.” The current intransigence in the south Florida population rhymes with the anti-engagement environment which welcomed Obama to the presidency. In 2007, sixty-four percent of Cuban Americans supported the embargo. By the time Obama left office, only thirty-nine percent held that view.

What can explain such a shift in Cuban American public opinion during the Obama years? Social science offers some insights on the rhyme and reason for the shift in views.

The best science that we have on what moves Cuban American opinion on U.S./Cuba policy is provided by the FIU Cuba Poll. The FIU-CP is not a political poll. It is the largest, longest-running scientific research project ever conducted on Cuban American attitudes in south Florida.  The population survey employs a rigorous (and expensive) methodology based on strictly controlled probability sampling, follows the scientific method and is analyzed by social scientists trained in the interpretation of cross-sectional data.

What is most scientifically compelling about the Cuba Poll is that it has accumulated data points for thirty years on South Florida Cuban Americans. This massive amount of information (over 10,000 total respondents) allows for the emergence of patterns not evident when looking at results from a single poll.

When we control for the influence of demographic, socioeconomic, birthplace, and immigrant cohort variables, that is, when we measure only the influence of the political party occupying the White House on public opinion, a strong, unambiguous pattern emerges:  leadership from Washington has a significant and direct influence on the views of Cuban Americans towards U.S./Cuba policy.

Exhibit A in this argument is the pattern established since the mid-1990s by the community’s support for the hot-button issue of the embargo.

During the George H.W. Bush administration (Bush I), 85% of Cuban Americans in South Florida supported the embargo. By 1995, two years into the Clinton administration, support was at 82%.  From 1995 to 2000, however, even as the Helms-Burton Act made it through a Republican Congress, the embargo endorsement rate declined by 3.6% per year—a total of 18% from 1995 to 2000.

The George W. Bush years (Bush II) saw a stabilization of the embargo support at the level reached during the Clinton years. Approximately 63% supported it at the beginning of Bush II administration and 64% supported at the end of his two terms.

This pattern is consistent, no matter what predictive technique we use. Whoever controls the White House shapes attitudes on the Cuban American south Florida ground.

It is easier, of course, to establish the existence of patterns than it is to explain why the patterns exist. Here is where qualitative evidence helps us set our compass.

It is likely that the pattern reflects, at least in part, the nature of the political narrative established by the party in power. While specific Cuba policies might not strongly differentiate Republicans from Democrats before Obama, the parties differed considerably in the venom oozing from the narrative in which they frame US/Cuba relations. For example, during the campaign leading to the 2008 election, all of the hopefuls were asked at one point or another to voice their opinion on the future of U.S./Cuba policy.

Obama’s position was less aggressive than Hillary Clinton’s, less specific than John Edward’s and considerably less conciliatory than Dennis Kucinich, who favored a full normalization of relations.  Yet, the tenor of the discussion by all of the Democrats contrasted starkly with the “no concessions to the Communist government” rabidity of George W.’s narrative, which was endorsed by John McCain, the eventual Republican nominee. In fact, when Obama came to Miami to address Cuba policy, he framed it in the context of establishing a “new alliance for the Americas.” It is not difficult to imagine how this type of discourse, which places Cuba policy in a broad, geopolitical context, provided space for a more nuanced discussion of US/Cuba relations.

By the same token, it is also likely that the softening of the Cuban American attitudes emerging after Obama’s elections stemmed partly from the pent-up frustration resulting from the inept handling of Cuba sanctions by the Bush administration. Cuban Americans, mostly loyal Republicans, did not approve of Bush’s restrictions on family travel and remittances.  (Trump targeted the Cuban family on both sides of the Florida Strait with similar restrictions.)

The new narrative which emerged from the community found a clear expression in a forceful opinion piece written by Jorge Mas Santo in October 2008, where he, as chairman of the board of the Cuban American National Foundation, endorsed a break with the ineffective policy of isolation and demanded that “[t]he next U.S. president should usher in a new U.S. policy on Cuba.”  This was followed, a year later, when Obama sat in the Oval Office, by a 14 page proposal by the CANF to “break from the past” and “chart a new direction for U.S.-Cuba policy.” No one would call the document, or the position of the CANF, a retreat from the traditional belligerence towards the Cuban government but it did recognize the ineffectiveness of the brutish hardline policy and tailored a velvet glove to fit the fists of the new strategies to bring about changes in Cuba.

If this interpretation of the data is accurate, it is likely that regardless of what Biden does or when he does it, a Democratic narrative on US/Cuba relations will have an impact on Cuban American attitudes and the pendulum will swing away from its current hard-line high mark.

The correlation identified by the FIU Cuba Poll between leadership emanating from the White House and community opinion is compelling and suggests a “build it and they will come” approach to establishing a Cuba policy. Let us keep in mind, also that the goal of the Biden administration should not be to either support or change the opinions of Cuban Americans, but to forge a relationship with Cuba which aligns with U.S. hemispheric interests. Foreign policy experts have suggested a roadmap that identifies the significant benefits of moving quickly on engagement.

The electoral benefits of maintaining an isolationist posture are dubious. It is extremely unlikely that a large portion of the Cuban American electorate will gravitate towards the Democratic party simply because it maintains a belligerent attitude towards Cuba. In fact, the only significant shift away from Republican dominance of the South Florida Cuban American voters occurred during the Obama years during which Republican registrations dipped to 45% (2014) from the 2007 level of 68%. Until Biden establishes and implements his own vision, he is simply continuing to promote a world order defined by Trump.

The evidence provided by social science contrasts dramatically with the lack of evidence correlating sociopolitical changes in Cuba with a hardline policy approach by the U.S. When has the hardline ever worked in bringing about changes in Cuba? Where is the evidence that limiting remittances, eliminating travel, and keeping families apart are effective strategies for improving the lot of Cubans on the island or in South Florida or, for that matter, for motivating the Cuban government to recalculate its political options? Is it time for op-ed pieces penned by community leaders to point out the obvious answers to these questions, as was the case in 2008? History is rhyming. Biden is presented with the opportunity of orchestrating its rhythm.

One thing has become evident. The comparsa of social change in Cuba marches to its own tumbadoras, sartenes and redoblantes, unaffected by the bitter desires for revenge motivating those who support policies that impose continued hardships on the Cuban people.

But, as Obama revealed, and social science reinforces, the rhythm of the conga of change in Cuba can be influenced by the United States when respectful engagement is undertaken by a policymaker with an appropriate set of timbales.