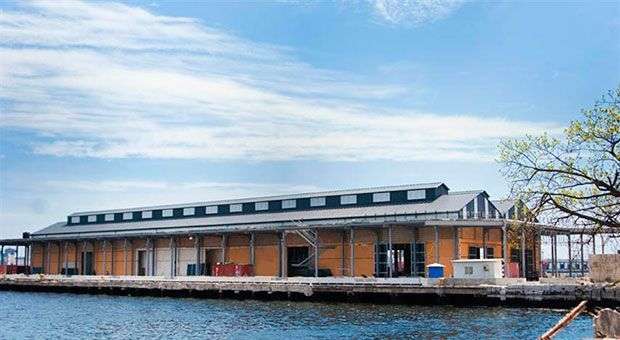 A new brewery , similar in the manufacturing process of this drink to that marketed in the current House of Beer, in Plaza Vieja, is ready for its opening.

It is part of the rehabilitation project of Havana Port conducted by the Office of the Historian of the City in order to rescue the architectural legacy and memory of the area, with a multifunctional purpose.

It is located where the once was the Cigars and Woods Warehouse, in front of Paula Church, at the end of the Alameda of the same name, next to San Jose Storehouses, restored in 2008.

After 3 years of implementation, the building is integrated into the incorporating project of this area within the public areas system of the maritime border and it is itself the opening for future purposes in the zone.

From the hand of architects Juan José Díaz (General Planner) and Orlando Inclan (Urban Design) and interior designer Monica Pestano, leaders of the Architectural, Planning and Interior Design Project for a brewery, we got to know details about this new establishment, the concepts followed for restoring the site, its implementation and characteristics.

Already ready for its opening (there is still no specific date for its inauguration) the new brewery in Old Havana will become a new space for recreation and entertainment of tourists and locals, with capacity for 400 people. As announced in press conference at the Green Tile House- Promoter Center for Modern and Contemporary Architecture, Urbanism and Interior Design, this involves the conversion of an old warehouse in an element generator of opportunities, development and economic, social and cultural exchange.

Among the attractions that this facility will provide we should mention that the public can enjoy the production process of the refreshing liquid, as well as its contribution to the new facade of the historic center, by being located on a platform above the sea. It will also serve as an example of the industrial heritage rescue of Havana Bay.

The visitor will attend a space to which the beer, sea, tavern and storehouse, thematic axes planned for its interior design in conjunction with colors, textures, murals, give certain atmosphere. Aged wood, rustic appearance and sea breeze will provide a unique harmony and energy to the 2800 m² of this new premise.

Further on and still in execution process, it shall be established on the same platform a shopping mall with no existing dimensions still in the country in this type of construction.

A rumor that mobilizes social networks: Will Victor Mesa advise Ramon Moré in the Caribbean Series?

Mr. Insulza 's visit to Cuba does not change the position of Cuba towards OAS