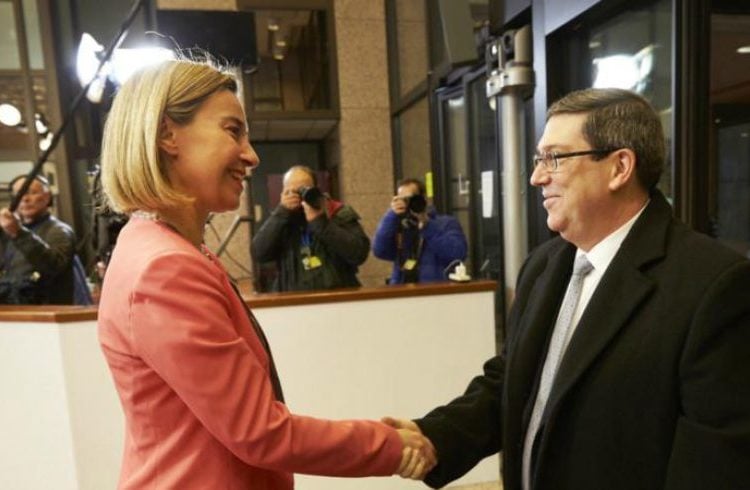 Since Monday December 12 Cuba and the European Union have a Political Dialogue and Cooperation Agreement. The island and the bloc of European states have, for the first time in history, an official reference framework for their bilateral relations.

The agreement was signed at the headquarters of the European Council in Brussels by Cuban Foreign Minister Bruno Rodríguez and High Representative of the European Union for Foreign Affairs Federica Mogherini.

“It is a historic day,” said Mogherini. “We turned the page, and today we started writing together a new chapter…. Nowadays we recognize that there is change in Cuba and we want to accompany that change. With the Agreement we will have the opportunity of taking Cuba-European Union relations to a new level,” she added.

Bruno Rodríguez affirmed that the document “will contribute to enriching a historic and culturally intense relationship and to developing to a greater extent political, cultural, commercial, financial, scientific, academic, sports and cooperation ties.”

“This Agreement is also a sign that with goodwill and reciprocal respect it is possible to reach an understanding and advance for mutual benefit, beyond the differences…. That’s how we treat others and that’s how we want to be treated,” he insisted.

Family portrait after the signing of the Political Dialogue and Cooperation Agreement. Photo: European Union.

The document must now be ratified by the 28 national parliaments of the member states. However, it will provisionally come into force with its signing.

Cuba established diplomatic relations with the then European Communities in 1988, and since then it expressed its willingness to negotiate an agreement of this kind, the foreign minister mentioned before pointing out that this result was reached “after traveling a long road and overcoming obstacles that created distrust and affected the links between Cuba and the European Union.”

The Cuban minister referred to “particularly favorable opportunities and conditions” in Cuba for the European Union to gain relevance in the island’s development plans.

Mogherini, who had started offering condolences over the death of Fidel Castro – “he passed away at a time of great challenges, uncertainties and great changes in his country” -, commented that the signing of the agreement is the first step after the annulment of the Common Position on Cuba, which marks its official dismantling.

The chronogram that concludes with this signing began eight years ago “with the first mission to Cuba, with the then European Union Commissioner for Development Luis Michel, starting up a high-level political dialogue and resuming the cooperation between the European Union and Cuba,” Mogherini explained.

The negotiations for an agreement began in April 2014 and last March the high representative came to Havana for the official closing of this stage and the signing of the negotiated texts.

“The Agreement constitutes the instrument through which the European Union can better support Cuba’s process of economic and social modernization. It is a framework to promote inclusive and sustainable development, strengthen democracy and respect for human rights…,” she specified.

With the news, many questions have come up regarding the possible impact of the new U.S. government, among the European Union’s strongest allies, in the relationship between Cuba and the Community.

Regarding the issue, Federica Mogherini affirmed in a press conference immediately after the signing of the Agreement that starting next January the new U.S. administration “will not affect in any way (the relationship)…. The European Union has great concerns about the extraterritorial effect of the U.S. sanctions on Cuba…. We think that this is not only of interest to the island and its people, but rather in our case it is also of interest to the Europeans’.”

Mogherini stated that the Agreement represents “a strong statement on our part about our commitment to work with Cuba. This means – for Cuba but also for the Caribbean and Latin America – a way of saying: ‘We’re here, and we’re here to stay. We are friends, we are partners, we want to work together and we’re going to work together.’”

Meanwhile, the Cuban foreign minister said when referring to what the new U.S. government has in store: “We are waiting for events to determine the perspective of the relations between the United States and Cuba, but I reiterate our country’s will to continue advancing in their improvement…. Relations between Cuba and the European Union fortunately do not pass through Washington.”

Human rights on the dialogue table

In its first point, the so-called Common Position sustained: “The European Union’s aim in its relations with Cuba is to favor a process of transition toward a pluralist democracy and respect for human rights and fundamental freedoms.” In addition, it stated the need for a “sustainable recovery and improvement of the Cuban people’s standard of living,” although not through coercive measures that will increase the economic difficulties of the island’s population.

While it continues being treated as a sensitive issue, a more fluid exchange has already started about it between the parties. “We have had two sessions of talks about human rights and we are satisfied because they have taken place with full mutual respect and we have been able to speak about both sides’ issues. We discussed everything, as friends, without taboos, based on a constructive rapprochement; and I think that is the right path,” commented Mogherini.

Rodríguez referred to the issue among the “areas of profound differences, fundamentally related to political spheres….” However, he insisted that this “is absolutely not restricted to the possibility of advancing in the spheres of understanding and of common ground.”