The Bolivarian Alliance for the Peoples of Our America (ALBA) will celebrate this weekend its 17th Summit in the Cuban capital, in which the former president of Bolivia could participate. 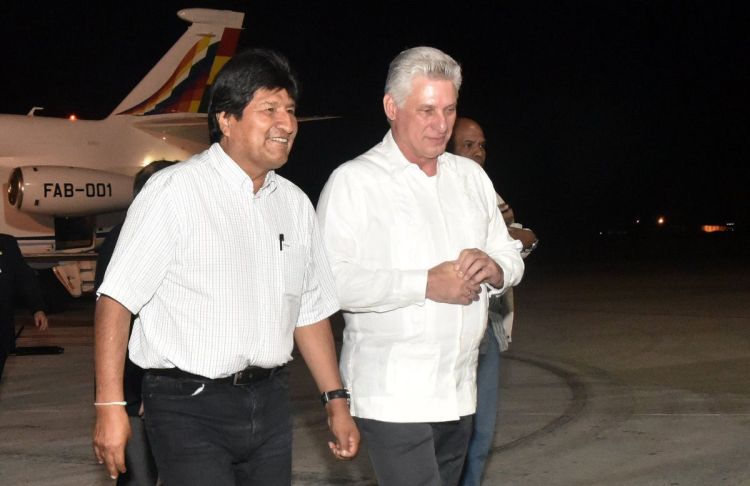 Evo Morales (left) is received at Havana’s airport by Cuban President Miguel Díaz-Canel on the night of January 31, 2019, when he was still president of Bolivia. Photo: Granma / Archive.

The Bolivarian Alliance for the Peoples of Our America (ALBA) will hold its 17th Summit this weekend in Havana, which is expected to be attended by the leaders of Venezuela, Nicaragua and host Cuba, not ruling out the presence of former Bolivian President Evo Morales, supposedly still on the island.

Although the Cuban government has not yet officially reported on the event, the Provincial Road Safety Commission issued a statement on the closure of several streets “on the occasion of the celebration, on Saturday 14, of the closing activity of the Summit of the Bolivarian Alliance for the Peoples of Our America-Trade Treaty of the Peoples.”

The closure of the Summit, according to the note published in the media, will take place on the steps of the University of Havana, a regular enclave for official celebrations of relevance such as the “march of the torches” for the anniversary of the birth of national hero José Martí or the ceremony commemorating the anniversary of the death of Fidel Castro.

In addition to Venezuela and Cuba, the ALBA brings together Antigua and Barbuda, Dominica, Nicaragua, Saint Lucia, Saint Vincent and the Grenadines, Grenada and Saint Kitts-Nevis. Bolivia was part of the bloc, but withdrew last November by decision of the interim government that assumed power in that country after the resignation of until then President Evo Morales, in the midst of the serious crisis that broke out after the October 20 elections.

Morales, during his years as president, was one of the main defenders of the ALBA and he did not miss any of the organization’s summits (the last one also held in Havana a year ago), which is why his presence is presumable this weekend to receive the support of traditional allies like Venezuela and Cuba.

In addition, the current secretary general of the organization is Bolivian David Choquehuanca, who was foreign minister for a great deal of Evo Morales’ years in government.

The indigenous ex-president has been in Cuba since December 6, supposedly for medical reasons, although the Cuban authorities have not confirmed or denied his presence in the country. Nor has he been seen in public, no images of him have been published and his activity on Twitter, although it is maintained, is more spaced and without mentioning where he is.

Morales arrived in Cuba from Mexico, where he was exiled since last November 11 and whose Secretariat of Foreign Relations initially indicated that it was “a temporary trip.”

The former Bolivian president has been treated several times in Havana at the same military hospital where the deceased Hugo Chávez and Fidel Castro were treated, a very safe and busybody-proof installation.