The migrants received medical care, food and were placed at the disposal of the National Migration Institute, which will decide their legal situation in Mexican territory. 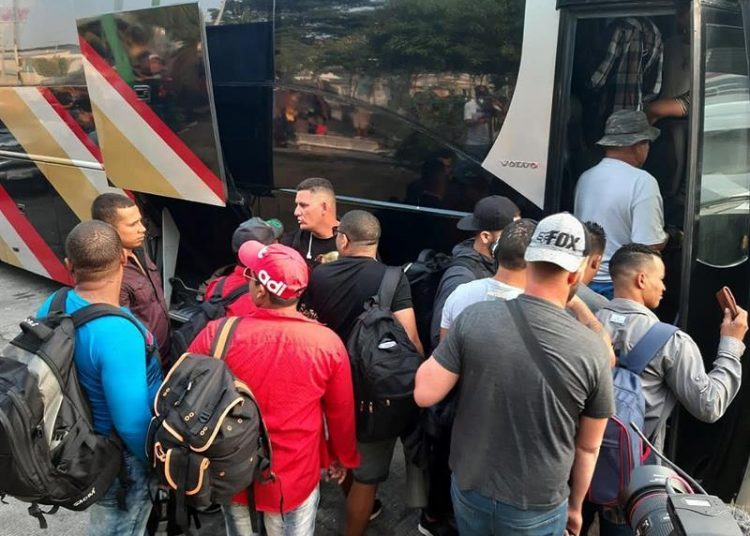 The police in the eastern state of Veracruz, in Mexico, this Sunday arrested 18 Cuban migrants while they were traveling by road in the municipality of Hidalgotitlán, the Ministry of Public Security reported.

The Cubans were located by agents of the State Police who in their surveillance rounds detected in the so-called Corchal Bridge five suspicious vehicles, they reported.

When ordering them to stop and checking the vehicles, the police officers found the 18 Cubans, who failed to provide proof their legal status in Mexico.

The migrants were transferred to the migratory station of the municipality of Acayucan and received medical care, food and were placed at the disposal of the National Institute of Migration, which will decide their legal situation in Mexico.

Due to its geographical location, Veracruz is an obligatory passage point for migrants, mostly Central Americans, who seek to reach the United States.

However, at least three drug cartels operate in this area, so high levels of insecurity are reported. They are the Zetas, Jalisco Nueva Generación and Golfo cartels that are disputing control over the territory.

The drug transport routes and passage of migrants, charge for the right to stay (business extortion) and the kidnapping industry are disputed.

The presence of Cuban migrants in Mexico has increased in recent months with hundreds of them stranded on the northern border waiting to cross into the United States, and protagonists of violent incidents in various migratory stations.

Dozens of Cuban migrants admitted to the Tapachula immigration station, in the state of Chiapas, on April 5 promoted a wave of protests that ended with the escape of 1,000 migrants, of which 600 were not located later.

Two weeks later, on April 18, Mexican authorities thwarted the attempt by 300 Cubans to arrive in the Mexican capital by stopping the buses on which they traveled in the city of Huixtla, in the state of Chiapas.

Alden González: "What happened with Santiago’s carnivals seems shameful to me"