The study applied in three shot doses included more than 48,000 volunteers from the capitals of Santiago de Cuba, Guantánamo and Granma provinces, in order to test its effectiveness against COVID-19. 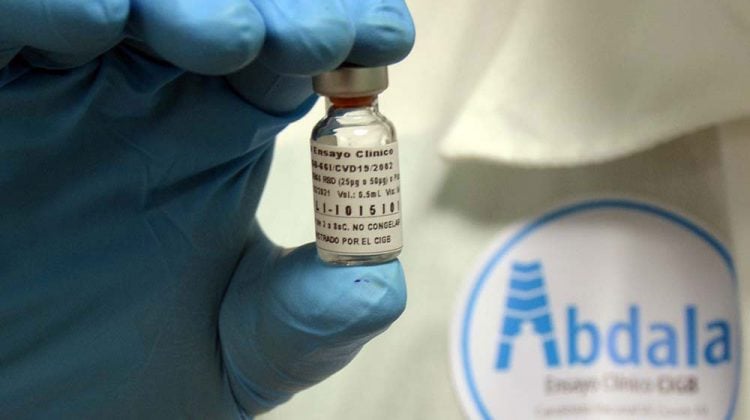 The Abdala COVID-19 vaccine candidate, one of the five developed in Cuba that has already been tested in humans, concluded this Saturday the third and final phase of clinical trials, which began in March in the eastern part of the island.

The study applied in three-shot doses included more than 48,000 volunteers from the capitals of Santiago de Cuba, Guantánamo and Granma provinces, in order to test its effectiveness against COVID-19.

This was confirmed on Twitter by the BioCubaFarma conglomerate, which comprises the main entities of the pharmaceutical and biotechnology industry in the country, and the Center for Genetic Engineering and Biotechnology (CIGB), in charge of developing the vaccine candidate.

In particular, the CIGB specified that the trial culminated with “more than 97% adherence to vaccination,” among the 48,290 volunteers who received Abdala in the eastern region of Cuba.

Researchers from the CIGB itself recently told state media that, once this stage is completed, the appearance of positive cases for the SARS-CoV-2 coronavirus among the study participants would begin to be evaluated. Dr. Verena Muzio, director of clinical research at the institution, explained that this will make it possible to compare the proportions between the vaccinated group and the one inoculated with a placebo, and thus evaluate the efficacy.

The scientific center is also in charge of the Mambisa intranasal vaccine candidate, while Soberana 01, Soberana 02 and Soberana Plus are generated by the Finlay Vaccine Institute.

Abdala is also being applied at this time to health personnel and other risk groups in intervention studies carried out in Havana and in eastern Cuba. In addition, it will be part, together with Soberana 02, of the mass intervention that should begin in May in the capital and in which the authorities intend to immunize 1.7 million people.

Soberana 02, the other most advanced Cuban vaccine candidate, is also currently in phase III of clinical trials in the city of Havana, in which 44,010 volunteers aged between 19 and 80 years are participating, and will also be tested in Iran, where 100,000 doses of the formula have been sent.

None of the Cuban candidates yet has the authorization for emergency use or registration, but the authorities and experts hope to achieve it soon based on the results of these studies, to start the mass vaccination on the island. If so, Cuba would be the first country in Latin America to have its own COVID-19 vaccine.

To date, Cuba has registered more than 108,000 positive cases with SARS-CoV-2 and 664 deaths from the disease. Since January, the island has been going through a third wave of infections, with more than a thousand cases a day on average in recent weeks and an increase in mortality, which experts attribute to the greater transmissibility of the new strains circulating in the country and the population’s low-risk perception.

The Cuban government has not purchased vaccines in the international market, nor is it part of the COVAX Mechanism created under the sponsorship of the World Health Organization (WHO) to promote equitable access to immunization in low- and middle-income nations. Instead, it has bet on its renowned biopharmaceutical industry to face the pandemic and achieve this year the immunization of the island’s inhabitants.