The General Department of Provincial Transportation of the Cuban capital summoned Cuban state enterprises and forms of non-state management related to this means of transportation, to present their proposals for the tender for this system, which will have nine bike stations and 350 vehicles. 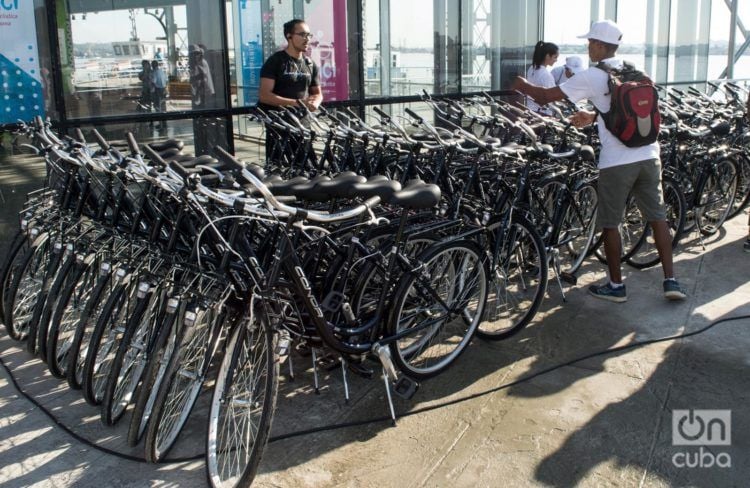 Station of the Ha’Bici project in the Emboque de Luz, in the Historic Center of Havana. Photo: Otmaro Rodríguez/Archive.

Ha’Bici Neomovilidad is the cycling mobility initiative that will be implemented in the Havana municipality of Boyeros, and whose management has been put in tender by the transportation authorities in the Cuban capital.

The system will operate in the Fontanar-Reparto Abel Santamaría-Wajay-Cujae-Reloj Club areas and will have nine bike stations and 350 vehicles, according to state press.

The project is part of the Bike Mobility Strategy in which the General Department of Provincial Transportation of Havana (DGTPH) and the Center for Research and Environmental Management of Transportation are working together. They “support the safe and massive use of this means of sustainable transportation,” explains a note published by Juventud Rebelde newspaper.

The DGTPH summoned Cuban state enterprises and forms of non-state management related to this means of transportation, to present their proposals for the Public Bicycle Management System’s tender, which has as its main antecedent the Ha’Bici program of the Office of the City of Havana Historian, in operation for three years in areas of Old Havana and Centro Habana.

Those who wish to participate must submit their proposals until June 4, and to clarify doubts they can consult the Facebook page of the Neomovilidad Project, accessing the web address www.dgtph.transnet.cu, in the Planning Department, in the file Documents of interest, according to the transportation authorities in Havana.

The documents to be presented must meet the requirements of the Offer Summary, which is explained in the Bidding Terms and Requirements for Contracting the Public Bicycle System Management System, which can be found on the aforementioned website.

At the end of 2020 it was announced that for the current year this public transportation system would be operating, designed for average distances of three and a half kilometers, which would be used mainly for work and study purposes, and that it will have as complements the installation of surveillance cameras and the creation of cycle lanes.

The bicycles to be used will be assembled by the Minerva enterprise from the central province of Villa Clara, based on a specific design prepared by the Center for Research and Environmental Management of Transportation and considering the characteristics of the Cuban population.