Since last February 6, Cuba resumed the mandatory isolation of travelers from abroad to contain the spread of COVID-19 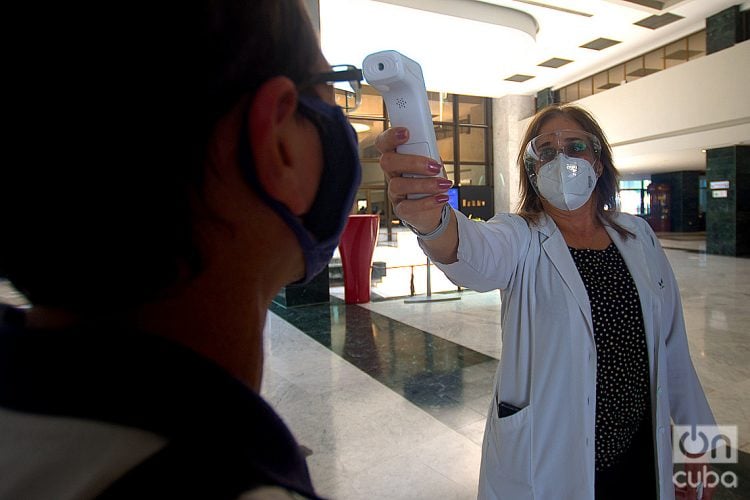 A doctor takes a person’s temperature at the Meliá Habana Hotel, one of the facilities that offers tourist packages for the isolation of international travelers in the Cuban capital. Photo: Otmaro Rodríguez.

Today Cuba is going through its worst outbreak of COVID-19. Since the end of last year, the coronavirus has spread again throughout the island, after months of indisputable success in its confrontation. As a consequence, the numbers of infections and deaths from the disease have increased significantly since then.

The case curve began to rise in November, after the opening of international airports and, especially, Havana’s José Martí, the main gateway to the country. After a sustained growth, January marked an alarming peak, compared to previously recorded statistics, reporting in its 31 days more than 15,500 infected and 70 deaths from the disease. Although measures and restrictions have been tightened, both nationally and locally, February aims to surpass those dismal numbers.

The authorities blamed international travelers mostly for the surge in infections—particularly Cuban residents and non-residents who started arriving in avalanche when the borders were opened—; and non-compliance by these and their families of the protocols established for travelers. Said protocols, among other things, prohibited them from leaving the houses and meeting with more people until it was ruled out, by means of a second PCR, that they were free of SARS-CoV-2. Irregularities and delays in reporting on these diagnostic tests and the end of the year festivities, in which many visitors and nationals ignored health recommendations, completed the explosive cocktail that has led to the current complex panorama.

Faced with this scenario, the Cuban government reduced in January the number of flights arriving on the island and started requiring a negative PCR carried out 72 hours before arriving in the country. These measures were part of an update of the sanitary protocol established for international travelers, which already by then included epidemiological surveillance at the border, a declaration of health, a diagnostic test at the airport and another on the fifth day of stay on the island, medical monitoring and limitation of movement in hotels, rental houses and communities, the use of a mask and other safety measures; as well as hospitalization in the face any symptoms or suspicion of contagion. All this would be kept in the updated protocol.

However, the aforementioned proved not to be sufficient to contain the outbreak and the Cuban government decided to go further. Since last February 6, a new flight restriction started being applied, in particular from the United States, Mexico, Colombia, the Dominican Republic, Panama and Jamaica, nations from which, according to Cuban authorities, the largest number of travelers arriving in the country come from. In addition, the resumption of travel from another group of countries in the area was suspended, to which Haiti was added, and the mandatory isolation of travelers was resumed, a measure that had already been applied on the island in the early days of the pandemic. Only this time some new features with respect to its previous application were incorporated.

As announced officially, the objective of isolation is that the people who arrive from abroad remain isolated until the result of the second PCR test carried out in Cuba is known. Thus, contact with other people is minimized and attempts are made to prevent violations and indiscipline from occurring, such as those that caused the current outbreak.

The isolation protocol varies according to the nature of the travelers. “In the case of foreign tourists, businesspeople, technicians and cooperators, as well as foreign diplomatic personnel accredited in Cuba, accredited foreign press and official delegations whose reception is approved in the period, the protocols approved by the ministries of Public Health (MINSAP), Foreign Trade and Investment and Foreign Relations, will be applied,” explained the health authorities when announcing the news.

As for the collaborators from the MINSAP and other state entities, these “will be isolated in the capacities created in Havana and Matanzas, complying with the established requirements,” while “foreign students and scholars will be placed in entities designated for this purpose. by the MINSAP or the Ministry of Higher Education,” in accordance with the new approved procedures.

Finally, Cubans residing in the country are placed in centers set up in their provinces, a cost-free modality that includes transportation to the center and back to their homes once isolation ends, while foreigners and Cubans non-resident on the island must carry out their isolation “in designated hotel facilities in each territory,” and they must assume the costs of stay and transportation. It is precisely at this point that the main doubts, criticisms and novelties of the measure are concentrated.

As specified by the sector’s authorities in a recent exchange with the foreign press accredited in Cuba, travelers in this category are being offered packages of six days and five nights, after which it is assumed that they will already have the result of the second PCR. To do this, they have two booking options: upon arrival at the airport or previously online, through the website of the Ministry of Tourism (MINTUR) or the agencies that offer these packages, such as Havanatur or Cubatur. Cubans residing in the country also have the opportunity to contract these offers, instead of going to the isolation centers originally intended for them, which, although free, have unquestionably less conditions and amenities than a hotel.

The facilities for this confinement, during which travelers must not leave their rooms, are distributed throughout the island—about a dozen in total—although half of them are located in Havana, where the majority of people arrive from the abroad. The packages range from five-star hotels, such as Meliá Habana and Parque Central, to three-star hotels such as Tulipán and Vedado, and vary depending on the offers they include. Some contemplate full board—breakfast, lunch and dinner—; others, only two meals, although customers always have the option of requesting room service.

Prices, therefore, vary, depending on the hotel category and other variables, and generally range between 40 and more than 100 USD per night, which also includes transportation from the airport and medical care in the facility, as well as cable television and internet connection so that customers can work, entertain themselves or communicate with the outside world, as they wish. The contracted packages’ extra products and services, however, must be paid separately. In addition, the possibility of extending the reservation—already in another area of ​​the hotel, not intended for these isolation packages—or making new reservations through the tourist agencies once the negative result of their second PCR is confirmed is not excluded.

In the hotels, according to the officials who spoke with the press, strict hygiene and safety protocols are followed, in accordance with the guidelines dictated by the MINSAP and the MINTUR. This includes the use of physical barriers as of the check-in, between clients and workers, and the constant use by the latter of means of protection such as gloves, masks, face shields and disinfectant solutions. It also establishes the separation within the hotel of the areas occupied by those in isolation—even when they cannot leave their rooms—and other clients who may be staying.

At the Meliá Habana, for example, the 90 rooms for those who remain confined—and of which about twenty were occupied last Thursday—are on well-defined floors and with differentiated care; while in the Comodoro Hotel the section for these packages—which this Thursday was practically full with a hundred clients in about 80 rooms—is also separated from the rest of the hotel and only a few workers enter to bring food to guests—which is left on a table outside the room, in disposable containers—and cleaning.

Finally, and not less important, there is the medical monitoring of clients carried out between two and three times a day by a team of professionals staying at the facility. The objective is to monitor the health of travelers, take their temperature, check their physical condition, carry out the PCR on the fifth day of stay and communicate the results of this and the first test carried out at the airport. In the event that a client tests positive or presents any suspicious symptoms, they are admitted to the hospital facilities designated for it. If, on the contrary, the result is negative at the end of their stay—the culmination of the accommodation package purchased by the travelers—, then the guests will be able to leave the hotel and carry out normally the activities for which they traveled to the island.