The restrictions on remittances hurt Cuban families and the emerging private sector and boost the informal market. 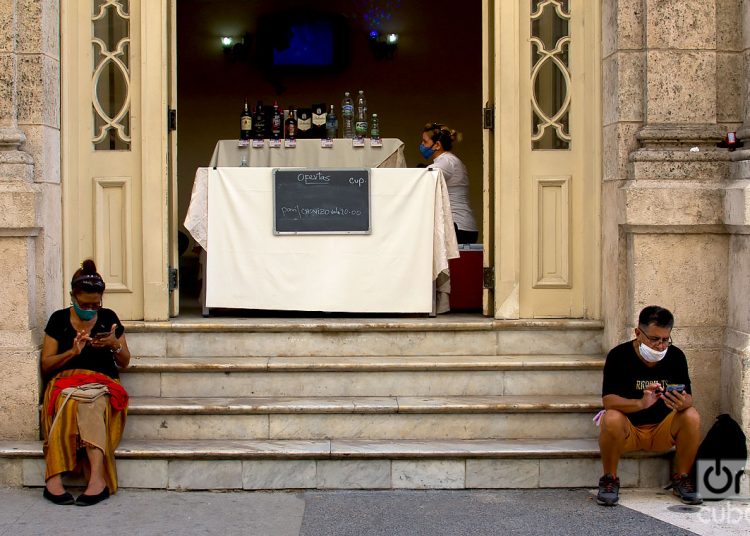 People connected to the internet at the entrance of a point of sale. Photo: Otmaro Rodríguez

The main United States remittance agency in Cuba, Western Union, closed its operations on November 26, 2020 after the U.S. government’s new restrictions the took effect. These new restrictions have at least three important effects.

First, they damage the survival strategies of Cuban families, which are already experiencing the effects of the current economic crisis. Second, they hurt the emerging private sector. Third, they promote a change in the sending of remittances from formal to informal channels, which increases the prices of services and products for Cuban families and the emerging private sector, while reducing the transparency of regulators in both countries.

Numbers in context: relevance of remittances in Cuba

Over the years, the Cuban diaspora has played a vital role in the Cuban economy and in family income, to the point of constituting the second most important source of hard currency on the island.1 Of the more than 2.3 million Cubans who emigrated to the United States,2 some 700,000 send remittances to Cuba each year.3 Western Union transferred between 900 million and 1.5 billion U.S. dollars annually.4 Before the closure, Cubans residing in the United States sent funds in approximately 240,000 monthly payment transactions through Western Union, especially to the Cuban capital.5 Around the same amount of funds was being transported through informal channels: friends, family, or so-called mules, that is, people who carry cash and merchandise to the island by charging their customers for this.6

Percentage of reception of formal remittances by province:

Source: Prepared by the author from information provided by CubaTrade (2020).

However, remittance flows started declining last year as the impact of the pandemic on the Cuban immigrant economy has been limiting their ability to support their loved ones. Similarly, restrictions on international travel, in force since April 2020, have affected foreign exchange earnings from tourism and the flow of remittances through informal channels.7

On June 3, 2020, the United States Department of the Treasury included FINCIMEX (Financiera CIMEX, SA) in the Cuba Restricted List. FINCIMEX is the Cuban agency, directed by the military, that manages and administers the reception and distribution of remittances. The Treasury Department’s Office of Foreign Assets Control (OFAC) took this action to prevent the military from benefiting from the fees for the remittance process. Secretary of State Mike Pompeo said: “Cuba is the only country in the hemisphere where the military takes a cut of remittances.”8 Although the main argument to prevent FINCIMEX from acting as a local Western Union partner is to limit the access by the military to remittance-related funds, this policy causes considerably greater harm to families and private entrepreneurs on the island.

The closure of Western Union adds another layer to the restrictive policies that the Trump administration imposed on Cuba in recent years. For example, in September 2019 he limited remittances per person to $1,000 per quarter to a close relative living in Cuba. In reality, many Cuban migrants support more than one family member, since economic needs affect not only individual members, but also the family as a whole. In addition, in Cuba families are usually extended, so grandparents, aunts, uncles, cousins ​​and other relatives live together. The closure of Western Union came as a second blow, further limiting the scope of support that Cuban Americans can offer their loved ones in difficult times.

The Central Bank of Cuba has assessed Western Union’s interest in continuing with remittance services in Cuba through REDSA, a non-military entity in charge of managing the network of Cuban ATMs and debit cards. The Central Bank has modified REDSA’s license to include the handling and processing of family remittances sent to Cuba from abroad. This official action was published in the Gaceta Oficial de la República de Cuba, Resolution 152 of November 16, 2020.9

This license, which enables REDSA to manage the flow of remittances, would allow Western Union to return to Cuba. One potential scenario could be that senders make electronic transfers directly from their bank accounts using Western Union to finance Cuban debit cards for their family members. REDSA’s operations could expand the digital platforms designed for receiving remittances.10

Impact of closure of Western Union on Cuban families

Cubans living abroad often send money to their relatives to cover essential needs such as food, clothing, medicine, gas, electricity, water and telephone services. In this sense, remittances play a crucial role in the survival of families, particularly those with elderly and infirm members.

In current times, when Cuba is going through a serious economic crisis, remittances contribute to the survival strategies of recipient families. Due to the current economic crisis, it is difficult for the population to obtain essential foods such as milk, coffee, flour and chicken, which are accessed after hours in long queues. Additionally, product prices have risen not only in stores selling in dollars (where items are sold exclusively in hard currency) but also in state-subsidized food stores. Remittances allow recipient Cuban families to buy these products when they are available in the national market. With the closure of Western Union, hundreds of thousands of families who used to receive remittances are unable to purchase the products necessary to meet basic needs.

Impact of closure of Western Union on emerging private sector

The closure of Western Union also affects the emerging private sector. As previous research has shown, Cuban Americans send money to support the businesses of relatives and friends. The working capital offered by Cubans residing abroad favors the purchase of supplies in private enterprises, as well as the payment of rents or the coverage of other expenses related to the businesses. In this sense, around 50% of those who live in South Florida believe that U.S. citizens should be able to invest in Cuba. Of these, 46% said in a survey that they would invest in their own businesses on the island if this option were possible.11 In times of economic crisis like the current one, this economic support is even more important because private sector income has been affected by the drop in tourism and health security measures related to the COVID-19 pandemic.

In a recent conversation with the owner of a very popular restaurant in Havana, I learned that his customers have less possibilities of paying for gastronomic service. “The closure of Western Union has an impact on my business because a Cuban who does not receive remittances is a customer I lose,” he explains. Limited access to remittances means that entrepreneurs are losing customers for services and products, and that some businesses cannot survive.

Until recently, Western Union accounted for 50% of remittance transfers to Cuba. According to estimates, approximately the other 50% of transactions flowed through informal channels.12

According to the expert on remittances and migration Manuel Orozco, the impact of the restrictions on FINCIMEX and Western Union will probably lead to between 350 and 400 million dollars being sent annually through the informal route.13

Although the new restrictions reduce the amount of remittances that flow through formal channels such as Western Union, Cubans living abroad don’t forget the needs of their families. They explore alternative ways to get funds to them through unregulated channels, such as mules and cryptocurrencies. However, finding different ways to send remittances takes time and effort. Likewise, some consider that informal channels are too risky to transfer funds because they don’t offer the legal guarantees of Western Union, a well-known channel among the Cuban community and which is regulated.

U.S.-based agencies that send mules to Cuba have seen the opportunity to transport both essential and luxury goods that are in short supply in the local market to sell at high prices. Among other means, they use Revolico, a market not controlled by the State, similar to eBay, which serves as an online platform for electronic commerce and operates through servers located outside the island. In Revolico, Cubans sell and buy new or used products. For example, in November 2020 a 2015 MacBook Air was offered at 650 CUC (Cuban convertible pesos); just a month later, this product cost 850 CUC, a surprisingly high price for a six-year merchandise (with planned obsolescence) in a country where the average monthly salary has been around 879 CUP (Cuban pesos), equivalent to 36 dollars.14

On November 15, 2020, international airports were opened in Cuba to regular commercial flights. With the airports operating again, the mules had new opportunities to transport remittances and other products. The number of Cuban travelers increased in December, with 16 new flights arriving in Havana daily. The baggage loads generated by the mules affected regular travelers, who also wanted to bring their annual imports or Christmas gifts to their families.

A week-long or more luggage delay was common due to the extraordinary increase in goods carried as part of personal luggage. However, at the end of December 2020, Cuba again reduced international flights due to the increase in travelers who tested positive for COVID-19. Thus, mules located on the remaining flights are likely to carry products at even higher prices.

The United States’ restrictive policies on Cuban remittances limit the military sector but cause significantly more harm to families and private entrepreneurs, subject to the impacts of the pandemic and the economic crisis. These policies also limit Cuban Americans in supporting their loved ones in difficult times.

On the other hand, the restrictions benefit the agencies based in the United States that send mules to Cuba, which take the opportunity to charge higher prices for remittances and products due to the shortage and lack of other alternatives for shipments to the island.

Finally, the closure of Western Union is driving financial support to informal channels that don’t have commercial transparency.

The new authorization from the Central Bank of Cuba for REDSA to manage remittances may offer some relief to Cubans in the coming months. However, it is uncertain whether the United States government will authorize transactions between Western Union and REDSA for the processing of remittances, although it is a channel to consider. REDSA is part of the Central Bank and not a company controlled by the military sphere.

7 Delgado, D. (2020). The Impact of the Covid-19 Crisis on Remittance Flow to Cuba: A Glance at the Use of Digital Platforms.

* This article was originally published in “Horizonte Cubano,” a space of the Columbia University School of Law. It is reproduced with the express authorization of its author.