Two months after the November 27 demonstration, this Wednesday there was another moment of tension at the headquarters of the Cuban Ministry of Culture. 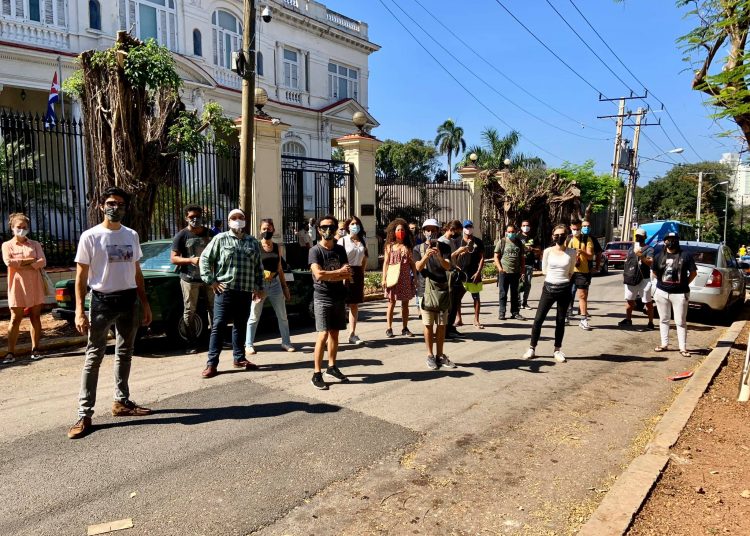 Around noon on January 27, some 20 people gathered in front of the Cuban Ministry of Culture (MINCULT). Exactly two months after the events of 27N, the protesters who came to the headquarters this Wednesday demanded an institutional response to the arrest of three Cuban artists in the morning.

According to statements to the Periodismo de Barrio site, today some artists and intellectuals linked to 27N had planned “a very simple gesture, waiting for the anniversary of the birth of José Martí and commemorating the two months of 27N, to go somewhere where there was a sculpture of Martí and have a poetry reading. Today we woke up and Tania Bruguera and Katherine Bisquet were under surveillance,” said visual artist Camila Lobón, present there. According to her, she herself witnessed the arrest of Camila Acosta and she was detained by police officers, who tried to take her cell phone from her. A State Security officer let her go after “talking to me for about half an hour,” she said.

For today, three “spokespersons”: curator Solveig Font, playwright Yunior García and Camila Lobón herself, had a meeting scheduled with Deputy Minister Fernando Rojas at the MINCULT headquarters, after several exchanges between the institution and some participants in the 27N, according to a statement posted on Facebook page 27N.

Several of those who were participating in the tribute to Martí decided to go to the MINCULT headquarters to demand that the people who had been detained be released. As could be seen in the direct broadcast of Periodismo de Barrio, Deputy Minister Fernando Rojas invited them several times to enter the Ministry’s headquarters and talk about this situation, which he said he would “take care of immediately,” but those gathered there decided to remain outside until they had an answer.

The reason given by Fernando Rojas was that there should be no crowds with the epidemiological situation on the island, but the attendees decided to remain outside the institution and affirmed that they would keep their distance when doing so.

Independent Cuban media denounced on social networks the aggression suffered by a journalist from Diario de Cuba by Minister of Culture Alpidio Alonso, who attacked reporter Mauricio Mendoza to take away his cell phone while he was filming outside the headquarters, as shown by the published images. After that, the broadcat was abruptly interrupted.

A few minutes later, the Cuban deputy minister of culture declared on Twitter that he had asked those gathered outside the Ministry’s headquarters to come in to talk and, instead, “they refused and provoked. And more than that.”

As reported by Periodismo de Barrio on Twitter, it is estimated that some of the protesters were arrested and their whereabouts was unknown. There is no official confirmation in this regard.

MINCULT: what happened was a provocation

After this afternoon’s incidents, the MINCULT issued an official statement in which it describes the events as “a provocation” by those gathered, to which the Ministry’s workers responded after several requests for them to withdraw “due to the risk posed by the COVID-19 epidemic in crowds in public spaces.”

According to the statement, those gathered “were repeatedly invited to enter the MINCULT headquarters to await the clarification of the situation of some citizens who, according to those who remained outside the institution, had been detained in other places in the city” and “it was also suggested that they talk with all of them on a topic of mutual interest.”

However, “in a frankly irresponsible attitude, those who remained on the street said they would not leave” while “media paid by the U.S. government were commenting live on what was happening and reinforcing the provocative atmosphere of the counterrevolutionaries.”

“Given this circumstance,” points out the MINCULT, “the workers of the Cuban Ministry of Culture decided to react immediately. They gathered in front of the provocateurs and urged them to withdraw” and “in the face of their refusal, and the obvious intention of materializing a media show, the Ministry’s workers confronted them and evicted them from the place.”

In keeping with this statement, Deputy Minister Fernando Rojas, who had agreed on Wednesday’s meeting with the three spokespersons of the 27N group, affirmed that “it is not possible to reach an agreement for a conversation and in a few hours violate it. This is called provocation.”

Rojas explained that despite the requests to those gathered to withdraw due to the epidemiological situation so that the agreed meeting could be held, “the refusals and provocations were constant,” even though, he said, he let them know that he was conducting inquiries about the detained people and conditions were created for their stay inside the MINCULT.

“The truth is that in the face of the latest refusal expressed in very provocative terms and knowing that we had a permanent follow-up of means financed by the U.S. government, and people who don’t want anything good for this country, much less now that it might seem other perspectives are opening up in bilateral relations, the Ministry workers decided, and I think rightly so, that the provocation had to be ended,” Rojas said in statements this afternoon to the foreign press accredited on the island.

Asked about the images of physical and verbal confrontations with the gathered people disseminated on the networks, which even involve the Minister of Culture, Rojas pointed out that “when there is a situation like the one that occurred here, the risk must be assumed that there will be some pushing around, and we assume it to face a provocation.”

“Several really upset comrades came out, they stood in front of the provocateurs, they asked them again to leave and, as happens when Cubans heat up, there were shoves, the occasional verbal brawl, there was undoubtedly a more energetic commotion for them to leave and, ultimately, we evicted them from there, that’s the truth,” he said.

When asked about the detentions and other coercive actions denounced by independent artists and opposition activists, today and in previous days, Rojas assured that the MINCULT was interested in examples of this type addressed at the 27N meeting, but he cannot take responsibility in all cases because it is not his competence.

Regarding the spaces for dialogue between cultural institutions and artists, after the events of 27N and now with the arrival of Democrat Joe Biden to the presidency of the United States, Rojas affirmed that “regardless of the situation, these processes of dialogue, of exchange, of analysis, of self-criticism, of reflection in the union, in the sector, will continue and will deepen.”

“What is going to happen anyway is that we are going to discuss this with artists and writers, everything within the Constitution of the Republic and the cultural policy of the Cuban State,” he added and said that from November until today “we have had meetings throughout the country on the most diverse, most complex, most difficult subjects, including the monetary reorganization, with thousands of artists. We don’t make a distinction between one segment of artists and others.”

Regarding the particular exchange with the 27N group, he said that “the dialogue with that group through its spokespersons has been maintained. It isn’t a simple dialogue, it isn’t an easy dialogue, but we have been willing to have it.”

Regarding the possibility of such a dialogue after what happened this Wednesday, Rojas affirmed that in the statement issued by MINCULT last December 4, “we made it clear with whom we were not speaking.”

“Our rejection has to do with the media financed by U.S. agencies and by the people who receive some kind of already more practical support from the U.S. government. We make that distinction, and by doing so we have tried to maintain the dialogue,” the deputy minister responded to a question from OnCuba.

“I believe that now we will have to see what pronouncement they make, how they react to our proposal, which is very firm, that we will not talk with mercenaries,” he added. “And there I adhere to the criterion that not everyone who has an opinion should be qualified, but that also means that whoever has an opinion has to be clear in the sense that what they are raising is an opinion and they aren’t providing a service to those who want to harm us. Therefore, we will be waiting for the reactions, there are already some, there are already manipulations of what happened out here.”

The deputy minister said that although he acknowledges that among the 27N protesters—of which those gathered this Wednesday were part—there are artists, there are also “mere provocateurs” and artists who behave as provocateurs, who “lie and manipulate information.” People who, he said, claim to have “more interest than us in dialoguing, but don’t show it, don’t put it into practice.”

However, he reiterated, citing the statement issued today, that “the Ministry of Culture ratifies its willingness to dialogue with honest creators on any issue related to the cultural policy of the Cuban Revolution and reiterates its refusal to accept provocations or to dialogue with mercenaries.”