Experts: monetary unification is necessary, but not sufficient, to update the Cuban economy

In the opinion of specialists from the Central Bank of Cuba, the dual currency and exchange rate in force on the island “generates distortions in the business sector and in the way the population interacts with it,” among other problems that “must be solved urgently.” 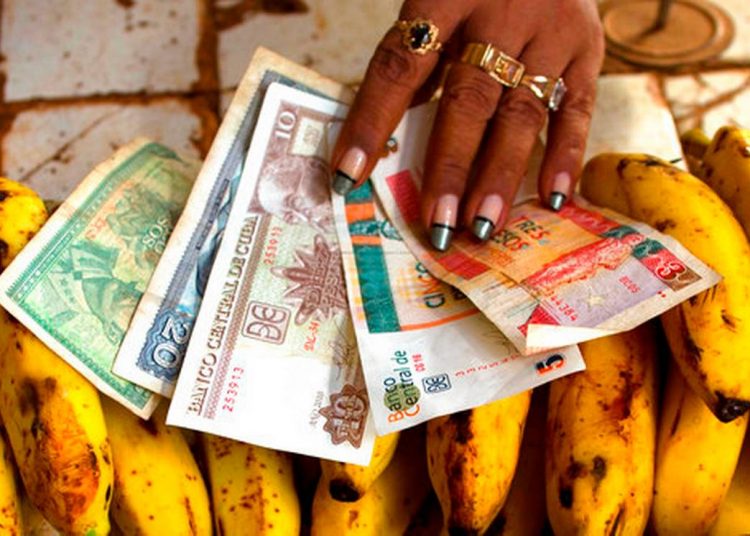 In this file photo, a food vendor distributes convertible pesos and Cuban pesos at her stall in an agricultural market in Havana, Cuba. (AP Photo/Ramón Espinosa).

The long-awaited, but not yet materialized, monetary unification is a “necessary condition, although not sufficient, to reorder and update the national economy,” said experts from the Central Bank of Cuba (BCC).

In an analysis on the subject published this Thursday in the official newspaper Granma, the specialists referred to “the imperatives” of eliminating the dual currency existing on the island since the 1990s, at a time when the island is going through “a crisis aggravated by impacts of the COVID-19 pandemic on the global productive system and the tightening of the United States blockade against Cuba.”

After making a retrospective of the measures implemented for almost three decades to establish and regulate the monetary and exchange duality and the conditions for its intended dismantling, the experts addressed the underlying problems of the current scenario that, in their opinion, “must be solved urgently.”

Ian Pedro Carbonell, specialist at the BCC’s General Department for Economic Policies, explained how the current duality “generates distortions in the business sector and in the way the population interacts with it,” while producing an “internal gulf between the retail price and wholesale price.”

“One of the problems that requires more attention is the exchange rate in the business sector (1 CUP equal to 1 CUC equal to 1 USD), which is what we call ‘overvalued,’ which represents a brake on productive capacities, discourages exporters and favors imports,” he commented.

In Carbonell’s opinion “this situation has a considerable effect on the operation and the balance of accounts of enterprises, and makes it difficult to measure economic events and the effect that incentives should have.”

Regarding its impact on the Cuban population, he pointed out that “the difficulties are related, above all, to the cumbersome processes generated by having to use two national currencies, which has been corrected with the possibility of using both in many facilities.”

For her part, Karina Cruz, a specialist in the BCC’s Department of Economic Studies, said that an ideal monetary environment in Cuba supposes the stability of the national currency as the key, which, in her opinion, “is achieved by guaranteeing that the processes of money issuance correspond to the evolution of the real or productive economy.” Also, avoiding inflationary processes “that occur when there is too much money in circulation and when prices go up, which affects the purchasing power of the currency and its credibility.”

“A favorable scenario for the Cuban peso to fulfill its functions and to preserve macroeconomic balances,” pointed out the expert, “would imply an exchange rate that brings the supply and demand of foreign currency closer; the existence of clear rules for monetary issuance, so that the economy has just the amount of money needed, and discipline between government income and expenditures (control of public debt).”

In addition, Cruz stressed the importance of “coordination between the agencies in charge of conducting macroeconomic policies, as well as moving from an administrative direction to the use of financial instruments, so that prices can offer signals for a better performance of consumers, producers and the general planning of the economy.”

According to the specialist, work should be done on “the training all those involved in making this ideal environment as real as possible for Cuba,” but she did not offer a roadmap or time horizon for this.

This public analysis by BCC experts comes at a time when the Cuban government is promoting a group of measures to boost the depressed Cuban economy, including the opening of stores in freely convertible currency and the elimination of the tax on the USD.

On more than one occasion, President Miguel Díaz-Canel and other authorities have referred to the need to promote monetary unification, but so far no definitive steps have yet been taken.

At the end of last year, Díaz-Canel affirmed that for the island’s economy “the most pressing thing is the monetary organization,” while Minister of Economy Alejandro Gil clarified saying that the monetary unification would not be done “against the clock” but “when the conditions are created.” Even so, in the current economic scenario caused by the pandemic, monetary unification, according to Granma, is “on the horizon for Cuba.”