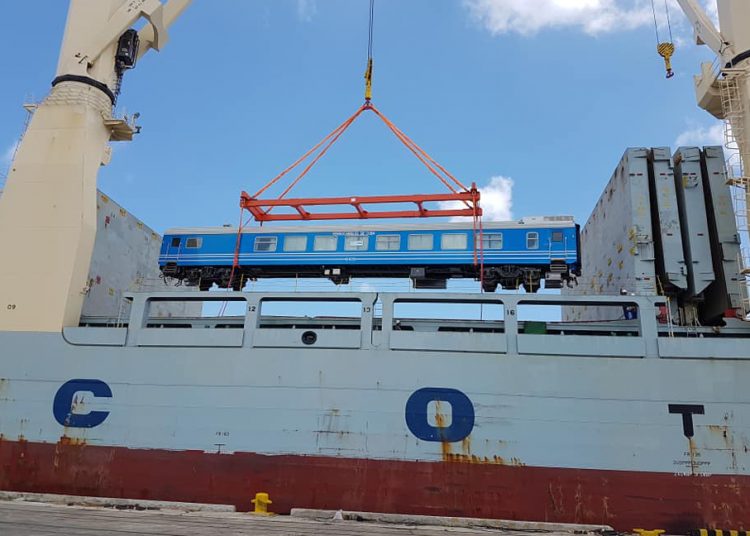 Unloading in the port of Havana of new Chinese cars for the Cuban railroad, on May 19, 2019. Photo:@JuventudRebelde / Twitter.

The first 56 Chinese-made passenger cars for the modernization of the Cuban railroad arrived this Sunday in Havana.

Cuban Minister of Transportation Eduardo Rodríguez, present during the arrival and unloading operations in the port of Havana, highlighted the importance of the investment “to start changing this limited service to the population,” according to Prensa Latina (PL).

The cars are part of a first batch of 80 from China, thanks to an agreement between the island and the Asian nation as part of a program for the recovery and development of the Cuban railroad planned until 2028.

For 44 years, Cuba hadn’t acquired new cars for passenger transportation, according to PL. The newly arrived cars have two categories with different levels of comfort: first class, with air conditioning and television and video system, among other services; and a second one with ceiling fans and audio system.

The two types have 72 reclining and rotating seats, two bathrooms and a drinking fountain, and there are plans to incorporate the sale of food on trips, according to previous information from the Directorate of Railways of Cuba.

The cars’ start-up will make it possible to “reduce the cycle of departures of various routes,” including the routes between Havana and the eastern cities of Santiago de Cuba, Bayamo, Guantánamo and Holguin, the latter after 13 years not in operation.

The critical state of rail passenger transport was addressed by a commission of the Cuban National Assembly in December 2018, which reported breaks in the tracks, bridges and level crossings, as well as the low availability of locomotives, freight cars, motor and passenger cars, which limits services.

The island’s railroad system has more than 8,000 kilometers of tracks, as well as a fleet of more than 500 locomotives, 13,000 freight cars, but only about 230 passenger cars, according to the Ministry of Transportation.

In addition to reanimating passenger transportation, the state program to modernize the railroad seeks to rehabilitate its main railway tracks through a joint project with Russia in which an investment of about 1.123 billion dollars is foreseen until 2030.

Locomotives for cargo transport and an experimental prototype of diesel railcar have also arrived from Russia. The agreement with Moscow also includes technical assistance to Cuban specialists, spare parts for the maintenance of the equipment and the modernization of a locomotive workshop based in the Cuban capital.